Deepening worries about a recession could weigh on the demand outlook for oil this week, despite tight supply concerns and the prospect of US job gains in June which might cause a new bout of volatility. 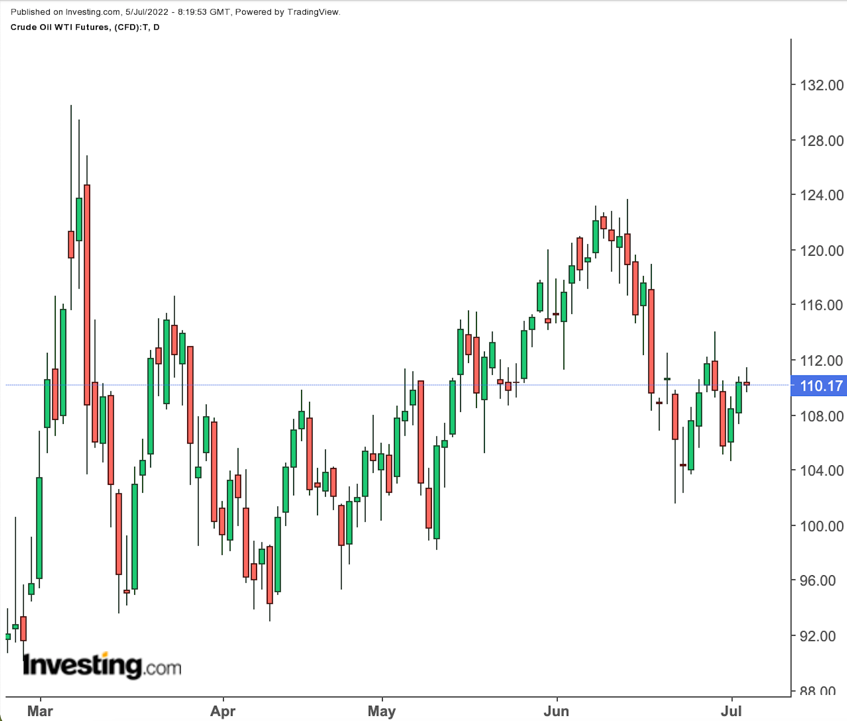 Gold , meanwhile, could trade in higher $1,800 territory as the yellow metal seeks to put in a technical recovery after last week’s near seven-month low. 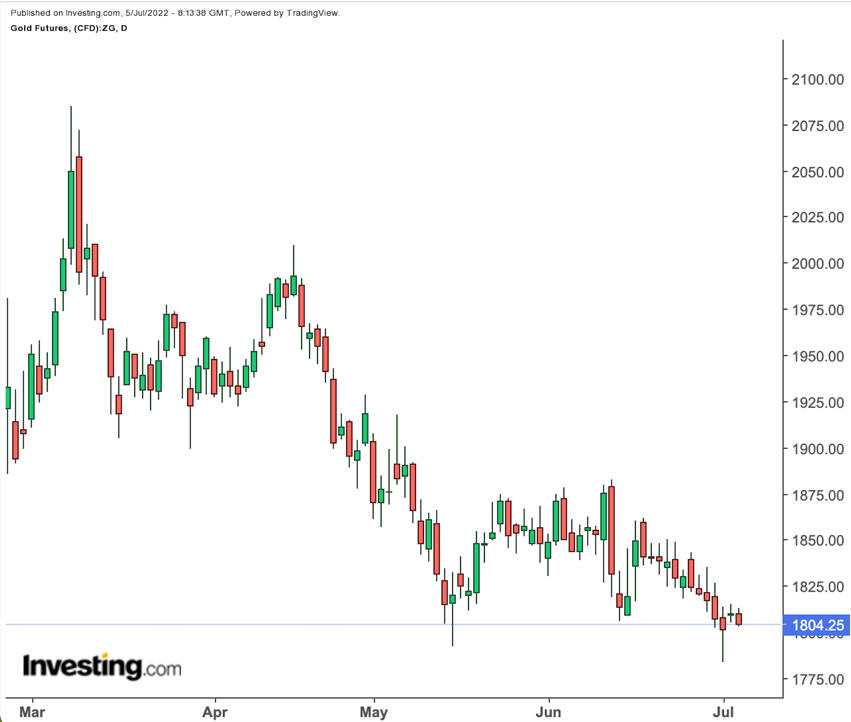 The drone of recession talk is expected to get louder across the US after the Atlanta Federal Reserve forecast a second straight quarter of economic decline for the year.

The outlook for oil demand is also at the forefront of investor concerns in commodity markets amid a broad tightening in global financial conditions as the US Federal Reserve fights rampant inflation with the highest rate increases in a generation.

The Fed is expected to push ahead with another 75 basis point rate hike at its upcoming July meeting, but the path for September is less clear.

Wednesday’s minutes from the US central bank’s June meeting will give investors some insight into how policymakers see the future path of interest rates, as markets remain focused on the prospect of a recession.

Interest rate hikes also loom in Australia and in South Korea as authorities try to damp down red-hot inflation. In South Korea, inflation in June hit a near 24-year high, adding to concerns of slowing economic growth and oil demand.

"Oil is still struggling to break out from its current recessionary malaise as the market pivots away from inflation to economic despair," Stephen Innes of SPI Asset Management said remarks carried by Reuters.

Adding to oil’s upside was a Norwegian offshore workers’ strike that will reduce oil and gas output by 89,000 barrels of oil equivalent per day (boepd) from Equinor, of which gas output makes up 27,500 boepd.

Oil output will be cut by 130,000 barrels per day from Wednesday, corresponding to around 6.5% of Norway's production, the oil workers’ lobby had said.

Economists say the US may be witnessing the beginnings of a real economic shakedown, but it’s been too numb to notice because of the miraculous resilience of consumers insulated by two years of pandemic aid; a housing market still running on old stimulus energy, and stock market rebounds after a few days of selloffs.

But US consumers won’t be superheroes forever and the slide into the economic abyss could come faster than thought, warn analysts.

In oil markets especially, the prospect of a recession has created more two-way price action in recent weeks, preventing any unsustainable surges in the price of crude. even as China reopened from COVID shutdowns.

WTI had finished June down more than 7% on recession worries but rebounded 2.4% on Friday, the first day of July itself.

So, as long as WTI sustains above $104 and does not slide below $101, more upside is expected, Sunil Kumar Dixit, chief technical strategist at skcharting.com, said. Adding:

“The financial markets continue to tie themselves in knots so complicated that they would give even the saltiest mariner a headache, as they try to price in a recession no recession and its impact on asset prices,” said Jeffrey Halley, who oversees Asia-Pacific research for OANDA.

Friday's jobs report and Wednesday’s release of minutes from the Fed are the highlight of this four-day, post-holiday week.

Investors are greeting the third quarter with greater trepidation about a recession, and that makes the June jobs report a potentially bigger catalyst for markets than it might otherwise have been.

Nonfarm payroll is expected to have slowed from May but remains in solid, positive territory. Economists tracked by Investing.com say some 270,000 payrolls were probably added last month—versus the 390,000 in May—holding unemployment at 3.6% for a third straight month. A jobless rate of 4% or below is seen by the Fed as full employment.

“I think the market is caught between two narratives,” Scott Redler, partner with T3Live.com, said in comments carried by CNBC.

“I don’t know if it wants good news or bad news. At first, the hot economic news was bad because the Fed could go another 75 basis points and keep going, but now the market wants softer news. But is the landing going to be soft or hard? It’s like threading the needle right now.”

The rebound from that low aside, it was a perfect week in the red for the yellow metal which settled lower in every one of the five sessions to cumulatively lose some $30, or 1.6%, on the week.

Gold had also logged a third straight week of losses, after prior weekly drops of 0.6% and 1.9%. For June itself, it lost more than 2%, rounding out a straight month in the red.

Bullion’s dive to near seven-month lows on Friday came on the back of incessant Fed rate hike talk and after the government in New Delhi raised import taxes on gold to support the battered rupee as trading for July opened.

India, the world’s second biggest bullion consumer, raised its basic import duty on gold to 12.5% from 7.5%. The move will immediately affect demand, even though the third quarter usually sees strong physical buying amid festivals, said Ajay Kedia, director at Kedia Commodities in Mumbai.