Crude prices dropped for a second session on Monday after the head of the world's top exporter Saudi Aramco (TADAWUL: 2222 ) said it is ready to ramp up output. Meanwhile, production at several offshore US Gulf of Mexico platforms is resuming after a brief outage last week. 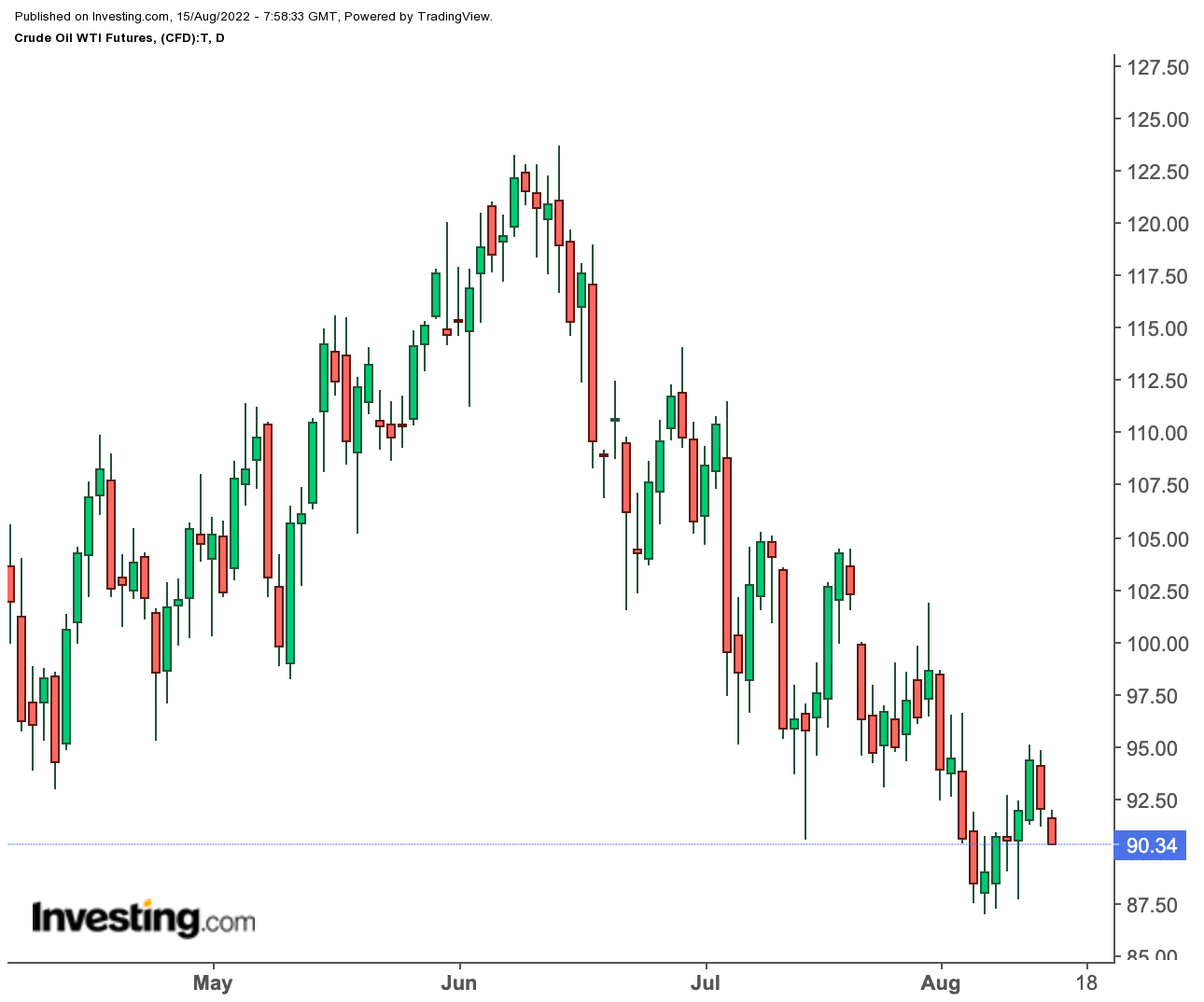 "We are confident of our ability to ramp up to 12 million bpd any time there is a need or a call from the government or from the ministry of energy to increase our production.”

He added that China's easing of COVID-19 restrictions and a pickup in the aviation industry could add to demand.

China’s Stats Bureau spokesman said the pace of economic recovery slowed in July. The property market, which accounts for a quarter of the Chinese economy, suffered its biggest fall in nearly a decade last month, amid still tight funding conditions and weak sentiment.

Analysts tried to make sense of Aramco’s pivot on production which came just after the Saudi-led Organization of the Petroleum Exporting Countries (OPEC) suggested a weakening in oil demand by the end of the year from a slowdown in the largest economies, including the United States.

“The Chinese economy is pointing lower, US crude production is rising and leading economies all have problems patches that look set to worsen. And Aramco’s hinting at higher production?”

WTI finished Friday’s session down 2.3% although it ended last week up 3.4%, offsetting some of the previous week’s 10% drop.

In the United States, the winding down of the peak driving season signals an impending drop in fuel demand, especially after parents cart their children back to school and college over the next two weeks for the new academic year.

U.S. crude stockpiles went up by almost 10 million barrels over the past two weeks, indicating that refiners took in less oil to process as fuel. While gasoline inventories saw a tumble of five million barrels last week, there were also intermittent builds of multi-million barrels in recent weeks.

To somewhat balance out the impact of the slump in crude exports, shipments of U.S. gasoline surged to 1.13 million barrels per day last week, the most since December 2018.

While the bulls have made much of the 180 million barrels—or one million barrels per day (bpd)—targeted to come off the Strategic Petroleum Reserve between May and October, U.S. oil production itself is rising.

U.S. crude output in the Permian basin in Texas and in New Mexico, the biggest shale oil basin, is due to rise by a cumulative 78,000 barrels daily to a record 5.445 million bpd in August, the Energy Information Administration said in its productivity report on July 18.

That left total drilled but uncompleted (DUC) wells down 26 to 4,245, the lowest since at least December 2013, according to EIA data going back that far. The number of DUCs available has fallen for 24 consecutive months.

It’s not just U.S. supply that’s rising. A wall of oil has also hit the international market over the past month.

OPEC oil output rose in July to its highest since April 2020, a Reuters survey found, as the group further eased production curbs under a pact with its allies and top exporter Saudi Arabia phased out a voluntary supply cut.

OPEC has pumped 26.72 million bpd, the survey found, up 610,000 bpd from June's revised estimate. OPEC output has risen every month since June 2020 apart from in February.

That’s why when OPEC, in its monthly report on Friday, revised down by 260,000 barrels daily its oil demand expectations for 2022, few were surprised. On the same day, t​he International Energy Agency said soaring international prices for natural gas could prompt more energy consumers to switch to oil for year-end heating purposes

OPEC has typically used lower demand as an excuse to cut production and boost prices.

But Aramco’s pivot on production is truly surprising as the state-owned company rarely makes such a comment without it coming all the way from Energy Minister Abdulaziz bin Salman or his half-brother, Crown Prince Mohammed bin Salman.

On the gold front, futures on New York’s COMEX held above the key $1,800 per ounce level, though bullion traded on the physical spot market slipped below the level. 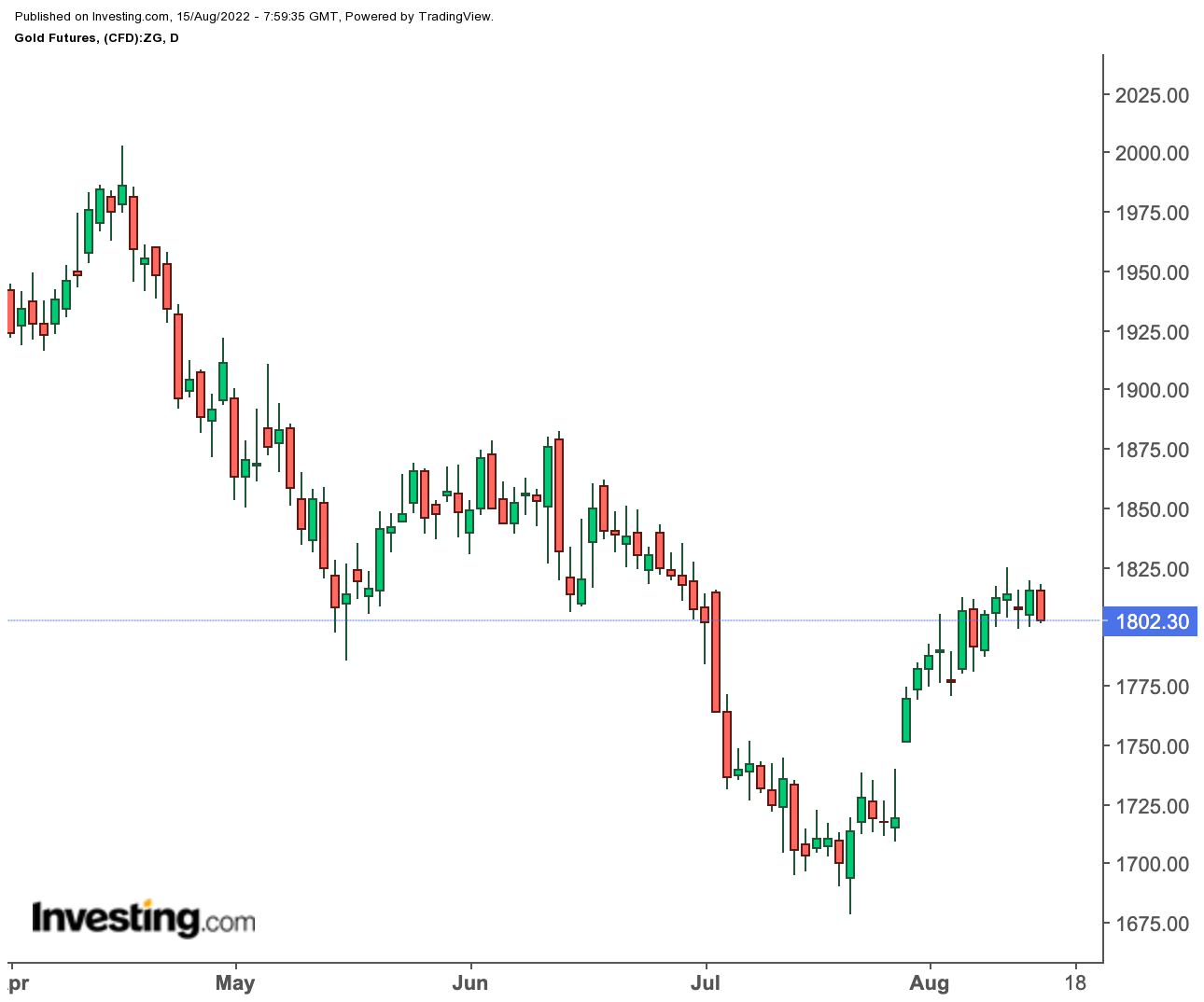 Gold prices are expected to be particularly sensitive to the minutes of the Federal Reserve’s July meeting on Wednesday.

A blowout jobs report for July eased fears over the prospect of recession, while last week’s inflation data pointed to the largest monthly slowdown in consumer price increases since 1973.

Traders are currently pricing in a less hawkish Fed, with fed fund futures showing a greater chance of officials raising rates by 50 basis points when they meet in late September, instead of 75 basis points as they have done at their last two meetings.

The United States is also to release July retail sales figures on Wednesday which will be watched for indications on the strength of consumer spending after a slowdown in second quarter growth.

Economists are expecting an increase of just 0.1% after a gain of 1.0% the previous month, with falling gasoline prices accounting for some of the slowdown.

Aside from that, investors will get an update on the cooling U.S. housing market, with July data on housing starts due on Tuesday, after falling to a nine-month low in June.

U.S. existing home sales figures for July are due on Thursday after falling for a fifth straight month in June to the lowest level in two years.