Oil bulls are getting all the support they need in their quest for $90-and-above a barrel as the week opens with a deadly air raid on the United Arab Emirates (UAE), a major producer, and a positive supply-demand forecast due from crude exporters group OPEC. 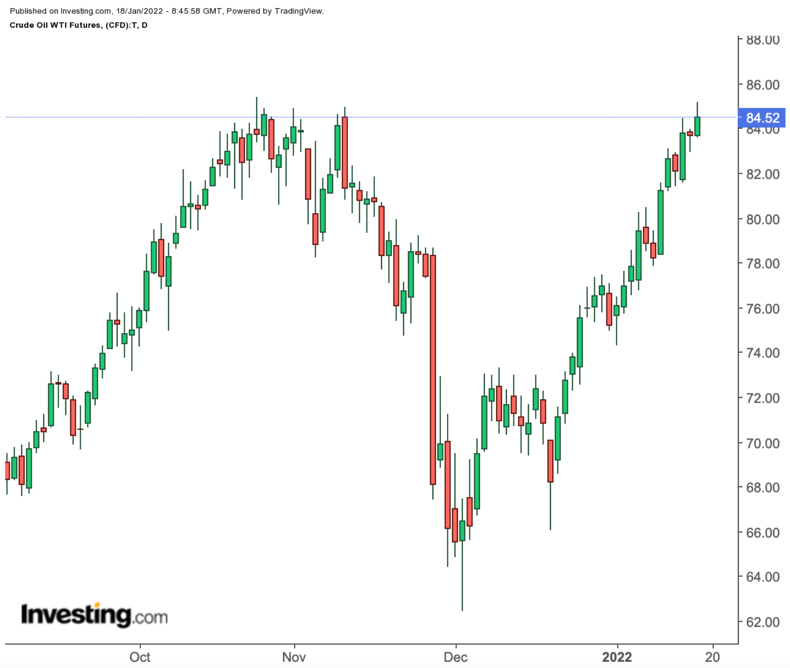 The Iran-allied Houthi movement launched drone and missile strikes on Sunday which set off explosions in fuel trucks in the UAE that killed three people, and warned that it will target more facilities, prompting Abu Dhabi to say that it reserved the right to "respond to these terrorist attacks."

The Organization of the Petroleum Exporting Countries (OPEC) is, meanwhile, slated to release its monthly oil market report later on Tuesday. Those long the market will be hoping to use that report as leverage for getting crude to its first target of $90 a barrel and eventually beyond $100.

The gains came amid evidence that months of fears about the Omicron variant of COVID may have been exaggerated, as the variant has hardly caused as many deaths or illnesses as other strains, including Delta.

Crude prices initially lost 20% of their value shortly after Omicron was discovered in November. They ran up again as underinvestment and outages prevented some OPEC+ producers from pumping at their allowed capacities under the group's agreement to add 400,000 barrels per day each month.

"If current geopolitical tensions continue and OPEC+ members can’t deliver on their 400,000 barrel per day increase, macros coupled with the strong technical outlook could see prices push toward the $100 mark which is where the next (meaningful) technical resistance level lies," said Ash Glover at CMC Markets.

Even so, some of this year’s rally in oil seems built on hype more than fact. The so-called tighter market for oil that has underpinned the rally conflicts with the 21-month high in gasoline stockpiles , reached after consumption cratered when the holiday season between late November and December ended.

This week’s gasoline inventory update from the US Energy Information Administration (EIA), due on Thursday, could be positive for longs. But even if the EIA issues another negative dataset, the upward momentum in oil isn’t expected to let up as Wall Street banks cheer hoarsely for $90-and-above crude and OPEC officials provide helpful soundbites when possible to push the market higher.

“The positive spin on price has broken into the third week of January, and the drivers behind the optimism have continuously tightened so far in 2022,” said Rystad Energy’s senior oil markets analyst Louise Dickson.

The latest spin came from Saudi Energy Minister Prince Abdulaziz bin Salman, the most powerful man in OPEC, who smugly told reporters at the weekend that he was “comfortable” with the ongoing rally in crude, and that it was Washington’s prerogative to release emergency US reserves of oil if it wished to try and bring the market lower—something the White House needs to do in order to control inflation .

Stripped of his niceties, the prince had basically given a diplomatic finger to the US, as well as China, which are both due to release oil from their Strategic Petroleum Reserves, with the specific aim of trying to tame pump prices of fuel, which in America has already reached seven-year highs—similar to the milestone for crude.

On the gold front, longs are expected to keep the yellow metal above the key $1,800-an-ounce support, following through with last week’s 1% gain that left the front-month contract in New York’s COMEX gold at above $1,816. 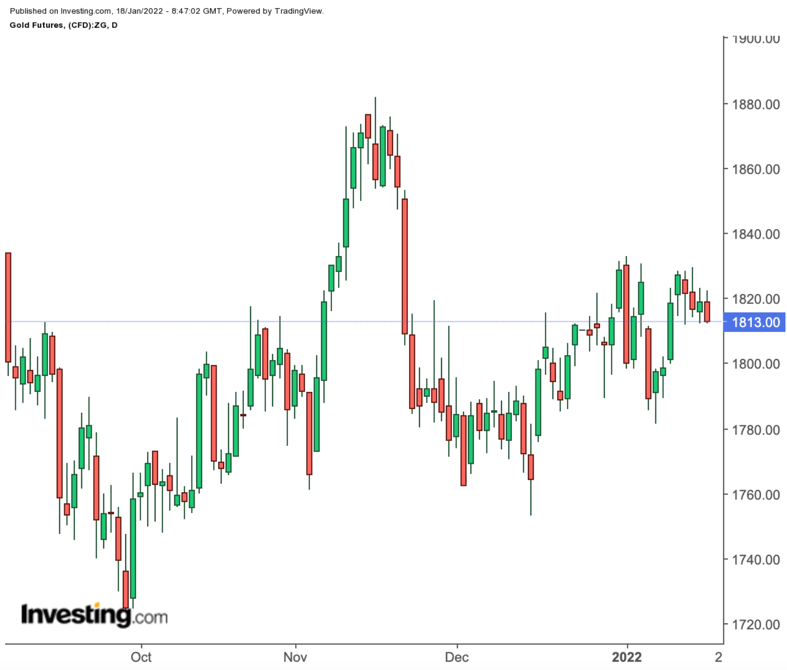 Gold is touted as an inflation hedge and is reinforcing that label by holding to the $1,800 level since the start of 2022, despite a series of rate hikes planned by the Federal Reserve. The precious metal failed in its hedge mission several times last year as the dollar and US Treasury yields rallied instead on expectations of rate hikes.

News of rate hikes is almost always bad for gold. That was somewhat reflected this last year as it closed 2021 down 3.6% for its first annual dip in three years and the sharpest slump since 2015.

But analysts think that if the US inflation theme remains strong through 2022, then gold could even retrace 2020’s record highs above $2,100—a peak which, incidentally, came on the back of worries about price pressures as the US began spending trillions of dollars on pandemic relief.