U.S. Treasury investors are on a roller coaster as yields climbed on interest-rate fears and then plunged on growth worries. 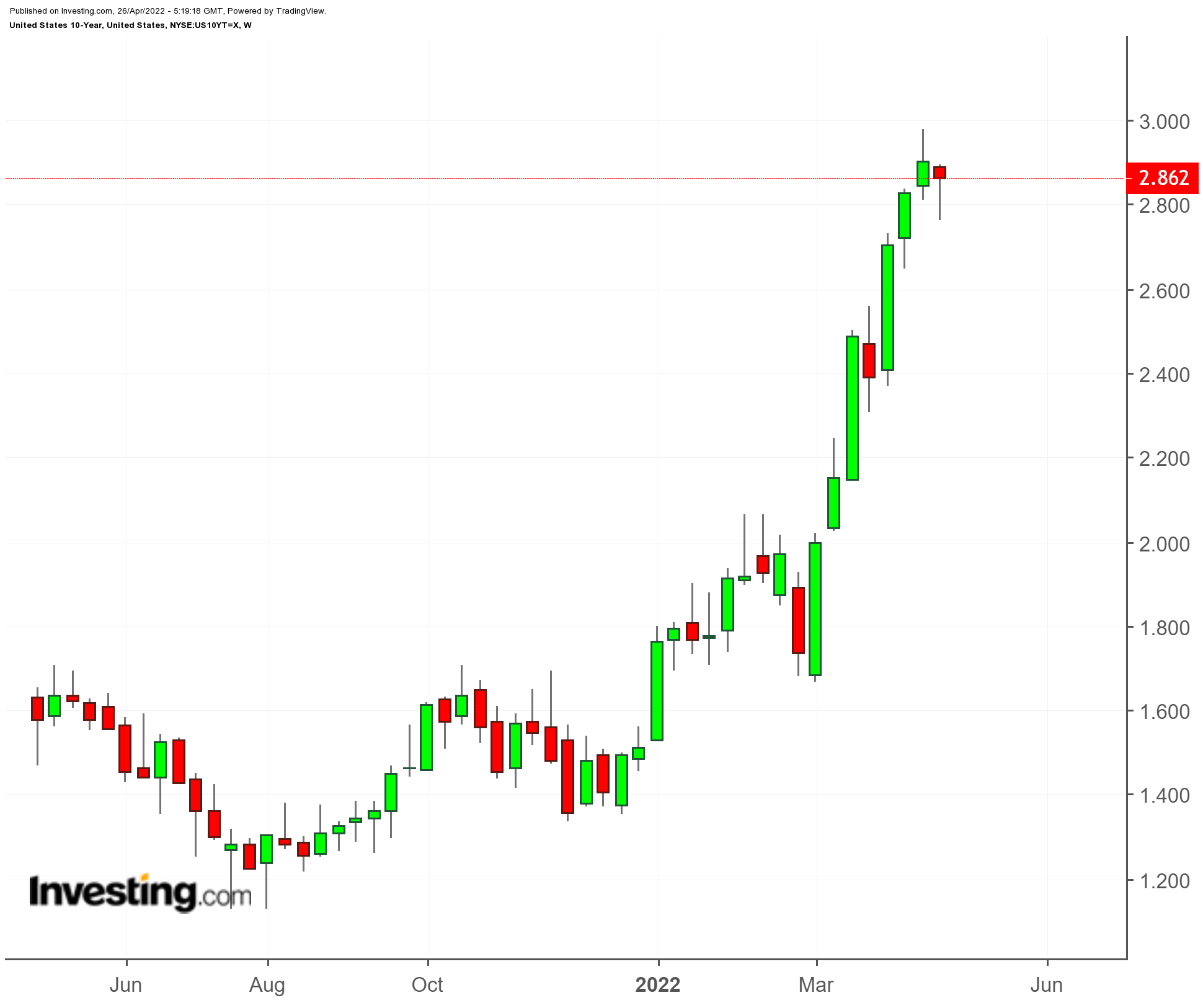 Remarks last week by Federal Reserve Chairman Jerome Powell about more aggressive monetary tightening sent yields on the benchmark 10-year Treasury up to near 3% on Friday, only to plummet more than 9 basis points on Monday on concerns about COVID-19 outbreaks and lockdowns in China. The yield reached 2.81% in late trading. 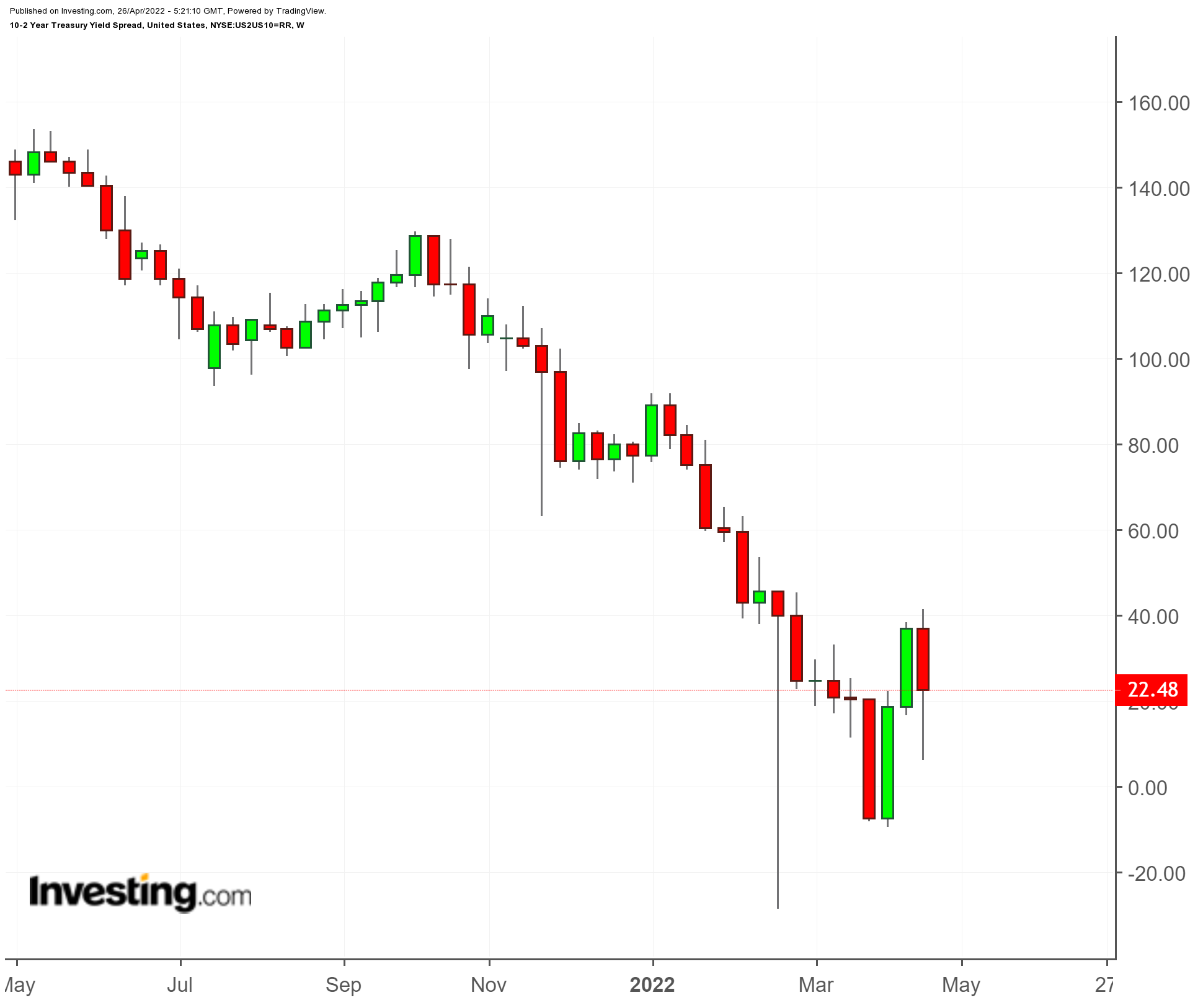 The flight into safe-haven investments lowered Treasury yields across the curve . The two-year note yield also shed about 10 bps on Monday to hit 2.615% in late trading.

The rise in U.S. Treasury prices—yields move inversely to prices—mirrored the sharp decline in equities as stocks continued their decent from last week. Stocks turned upward in late trading as bargain-hunting set in. Twitter's (NYSE: TWTR ) acceptance of a $44 billion takeover by Elon Musk contributed to the turnaround in stocks.

Meanwhile, Beijing residents turned to panic-buying as they feared Shanghai-style lockdowns were coming to the Chinese capital. Slowdowns in China would be a further drag on a global economy already hammered by the Ukraine war and its consequences.

Even so, Treasury yields are still high and the trend is upward. After blowing past the 2%-yield hurdle on a sustainable basis in March, the 10-year Treasury note seems to have set its sights on 3%.

The 10-year breakeven inflation rate—a market measure of average inflation expectations over the next 10 years—has topped 3% as investors worry that the Fed may not be successful in curbing inflation (or may not even try real hard).

However, economists at Dutch bank ABN Amro look for the 10-year yield to head towards 2.7% in the course of 2022, on the premise that investors have overshot on their expectations of central bank rate increases.

In short, there’s a lot of uncertainty about where things are headed.

In Europe, the electoral victory of incumbent French President Emmanuel Macron Sunday was widely expected and largely priced into financial markets. The premium on French 10-year bond yields had narrowed to 42 basis points by Friday as Macron’s poll lead widened. 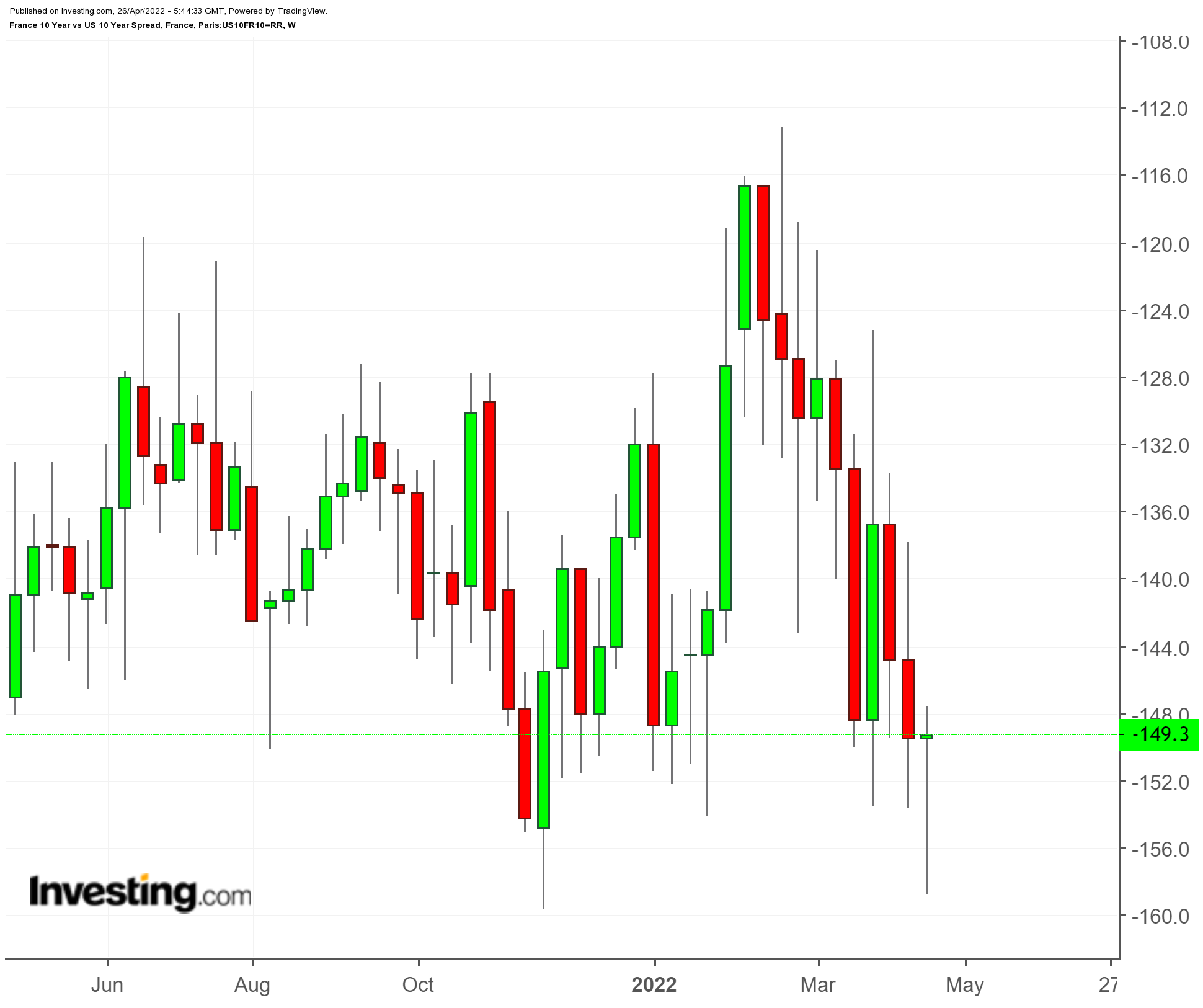 That measure of relative risk widened slightly on Monday. Some analysts see it widening further, perhaps by another 10 bps.

French parliamentary elections in June further complicate the picture as Macron’s political opponents immediately switched their emphasis to denying his upstart Republic on the March party a majority that would enable him to push through his pro-business agenda.

If they are successful, it could usher in a return to the so-called cohabitation arrangement, with a potentially hostile government determined by parliament limiting the president’s power.

Otherwise, European government bonds reflected the same growth concerns as in the Treasury market, particularly regarding the possibility of Beijing lockdowns. The yield on Germany’s 10-year bond fell below 0.83% before recovering to 0.85% in late trading, well below the 0.96%-plus posted late Friday.

The yield on the 10-year UK gilts, or government bonds, followed a similar pattern. Poor liquidity in the gilt market may induce the Bank of England to hold off on selling its nearly £850 billion gilt portfolio, as it continues to raise its policy rate and has stopped reinvesting maturing bonds.