A very low percentage of the cars on US roads are electric vehicles, and while the number is rising each year, gasoline-powered automobiles dominate the market. The US is the world’s leading oil-consuming country on a per-capita basis. However, China and India account for more than one-third of the world’s population and are substantial crude oil consumers.

While the world addresses climate change and encourages increased production and consumption of alternative and renewable fuels, the demand for crude oil and oil products continues to rise. Meanwhile, US production is lower in early 2022 than it was at the high in March 2020. According to the Energy Information Administration, daily US output fell from a record 13.1 million barrels per day in March 2020. US energy policy under the Biden administration has been responsible for the 11.5% production decline, which is not a function of the current state of global demand dynamics.

Lower US oil production is putting upward pressure on prices. Last week, Brent and WTI crude oil futures rose to new multi-year highs, and it may not be too long before the prices rise above the $100-per-barrel level, the highest price since 2014.

NYMEX crude oil futures reached the highest price since 2014 in late October 2021, when they ran out of upside steam at $85.41. A sharp correction and elevator ride to the downside took the price to a low of $62.43 per barrel in early December, a 26.9% drop.

The monthly chart highlights the correction that stopped short of a challenge of the August 2021 low of $61.74, a critical technical support level.

NYMEX crude oil got back on the bullish trail. Last week, the price moved above the late October high and rose to $87.91 per barrel and was over the $87 level on Jan. 26. While the NYMEX futures made a higher high, the most significant move last week came in the Brent futures.

When WTI futures rose to the highest price since 2014 in October, Brent futures remained below the critical technical resistance level of the 2018 peak. Last week, Brent caught up with the other global benchmark price. 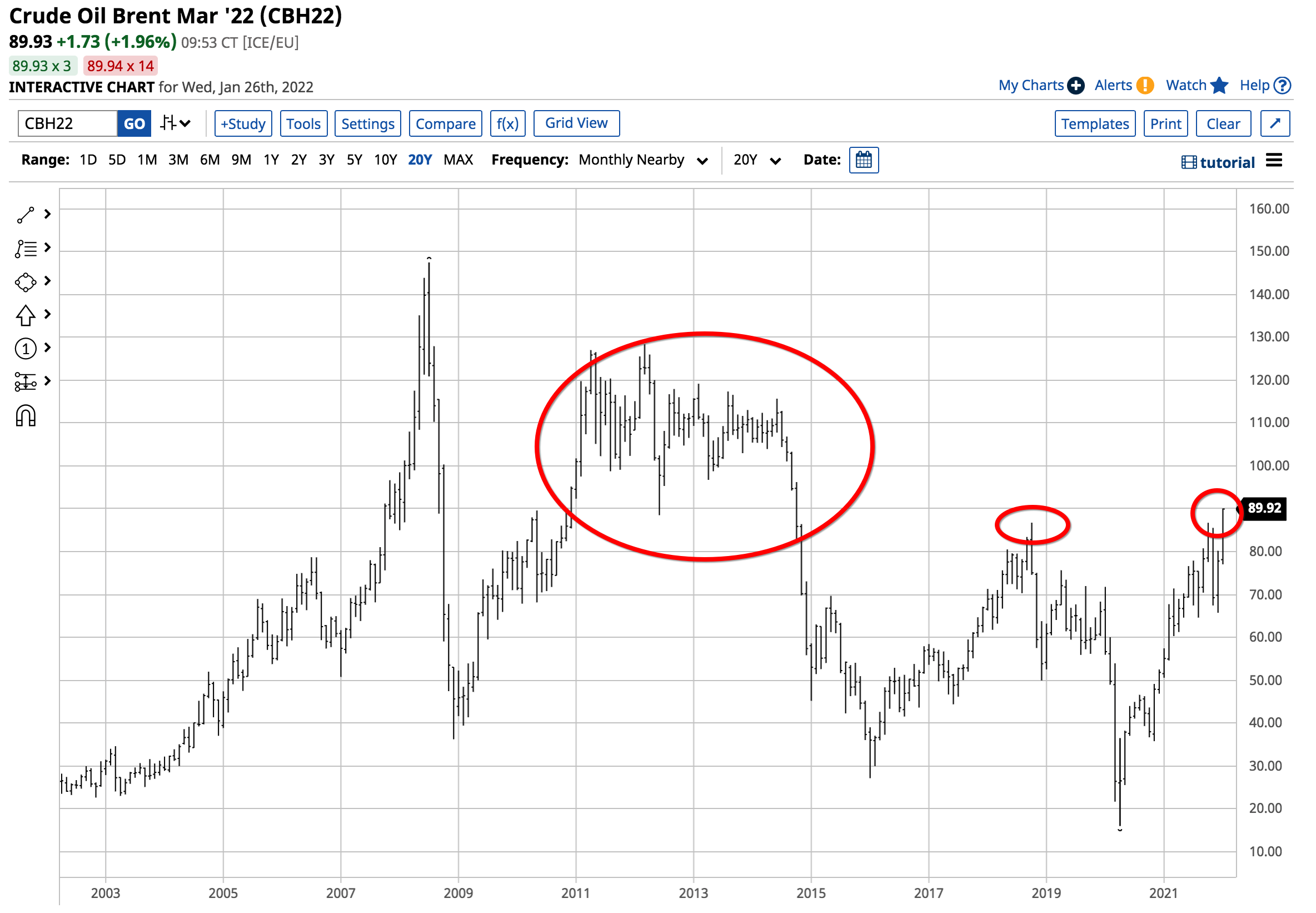 WTI and Brent futures are now in lockstep bullish price patterns with their targets at a triple-digit oil price.

The Biden administration campaigned on a platform to address climate change. On his first day in office in January 2021, President Joseph Biden cancelled the Keystone XL pipeline project that carried crude oil from the oil sands in Alberta, Canada, to Steele City, Nebraska, and beyond to the NYMEX delivery point at Cushing, Oklahoma.

In May 2021, the administration banned drilling and fracking for oil and gas on federal lands in Alaska.

The green energy initiative favors alternative and renewable energy sources and inhibits fossil fuel production and consumption. However, the overwhelming majority of cars in the US are gasoline powered, and China and India continue to require increasing amounts of hydrocarbons for power.

It took the US decades to overtake Saudi Arabian and Russian oil output to become energy independent. In 2021, US energy policy handed the pricing power back to the energy cartel and Russia. The US administration asked OPEC+ to increase production twice as gasoline prices had been rising. Twice OPEC+ refused, leading to a 50-million-barrel release of US crude oil from the strategic petroleum reserve. Fifty million barrels amounts to only three days’ worth of what the US requires. While crude oil fell after the SPR release, the price bounced back and made a higher high.

US energy policy has only added to inflationary pressures pushing the energy commodity higher since early 2021.

OPEC+ Has Only One Mission – Higher Prices

In 2016, Russia became far more interested and involved in OPEC strategy, expanding Russian President Vladimir Putin’s sphere of influence in the Middle East. Since then, the cartel does not make a move on production policy without Moscow’s cooperation.

OPEC+’s mission is to achieve the highest oil price possible while balancing the supply and demand equation. Lower US output has decreased global supplies when the demand has substantially increased. In March 2020, US daily crude oil production rose to a record 13.1 million barrels under the previous US administration. According to the Energy Information Administration, US output stood at 11.6 mbpd for the week ending Jan. 21, 2022, 11.5% below the record peak.

After years of suffering under the weight of increasing US shale output, it is payback time as US energy policy limits production. The bottom line is that the international oil cartel would rather sell one barrel at $100 than two at $50.

Geopolitics Could Cause Upside Price Spikes In 2022

US energy policy, rising inflation, robust global demand and OPEC+’s desire for higher prices are bullish for crude oil, which looks destined to trade in the triple-digits in 2022. Crude oil has historically taken the stairs higher and an elevator lower during corrections, as we witnessed from late October through early December.

Meanwhile, the geopolitical landscape suggests that an elevator ride higher in 2022 is increasingly possible.

The boiling tensions between the US and Europe versus Russia, with more than 100,000 Russian troops amassed along the Ukraine border, create the highest potential for hostilities or outright war in Europe since the end of the Cold War. A Russian incursion would likely cause oil prices to spike higher.

Each day, Iran comes closer to possessing a nuclear weapon, which increases the potential for hostilities in the Middle East. The Straits of Hormuz are a critical logistical chokepoint for crude oil from the region with more than half the world’s reserves. Iran and Russia are close allies, and Iran and Saudi Arabia are mortal enemies. Tensions in the Middle East are another front for the US and Russia, with China favoring an outcome that will keep oil flowing to the world’s most populous country.

The geopolitical temperature has risen, and oil prices are likely to respond to events over the coming weeks and months. The geopolitical odds continue to favor the upside for the energy commodity.

I expect to see crude oil above the $100 level in 2022. Moreover, if the geopolitical landscape remains hot, we could see a challenge of the 2008 all-time high of $147.27 on WTI futures and $147.50 on Brent futures. Rising oil prices will only turbocharge global inflationary pressures.