As I have said numerous times, most will fail when trying to time the market. It’s so hard to predict markets in the short-term, but a lot more feasible to project long-term.

To support this view, I recently attempted to time the Bitcoin market bottom around $28,000 on May 21. I also felt that stock markets overall would not go much further down. I was wrong, and in the short-term very much so.

What happened? The May inflation report came hotter than expected (my projection was based off of inflation cooling down), and as a result the Fed changed course and increased its benchmark rate 0.75%. This spooked markets, and the S&P 500 , Bitcoin and the rest of it experienced another significant drop.

Markets are stabilized for now, after a historic drop. How big is this drop? Let’s put this into perspective, using the S&P 500, the U.S. stock market’s main index.

According to Charlie Bilelo, the investor and Founder/CEO of Compound Capital Advisors, this is the second worst start in stock market history, a 22.9% drop. The only worse start? 1932, in the heart of the Great Depression, when the S&P 500 started off -40.5% at this point.

The silver lining? Historically, the five other worst year-beginning drops in stocks resulted in gains the rest of the year. 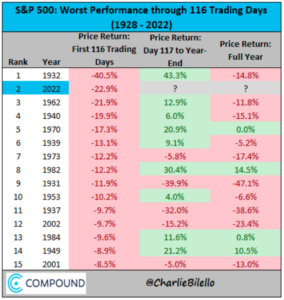 So will it get better or worse in the short-term? I am not going to try to guess that one.

In the long-term? I am very bullish on the S&P 500 and even more bullish on Bitcoin.

Reasons to Be Bullish Long-Term

1. Markets are cycles of booms and depressions.

The Federal Reserve will continue to fight inflation. They will either win or give up at one point. In both cases, they will then reverse course and the markets will start going up again.

2. Alternative Investments have outperformed the S&P 500

According to this report from tradethatswing.com, numerous investments have outperformed the stock market’s most popular index over the years.

The main difference between almost all of these and the index is one of liquidity and fungibility. If you need to liquidate $200,000 of Lego pieces in the next week, you may be out of luck. At the same time, the stock market is generally open five days per week, from 9:30 AM to 4:00 PM.

No other market is as liquid and open, except for crypto, which is open seven days per week. Thus, I am even more bullish on Bitcoin in the long-term. Here are a few more reasons I am bullish:

The bill does have its critics, and it has a ways to go before it is approved, however this is overall bullish. Here’s a breakdown of the bipartisan legislation provided by the Senator’s offices.

My favorite parts of the bill?

This will also be another reason for the SEC to approve a Bitcoin Spot ETF.

Just by sheer mathematical odds, this is bound to happen eventually. There are twelve ETF applications pending with the SEC.

Assuming one does get approved, why is this good?

The main reason is that there is an estimated $12.2 trillion in US retirement accounts. Most of these are not currently allowed to invest in Bitcoin. The pro-Bitcoin bill and this would open the floodgates.

Unlike the central banks of the word, Bitcoin has a fixed supply, 21 million, and an unwavering monetary policy. Therefore, as central banks created more fiat currency in the long-term, Bitcoin comparatively decreased in supply.

It appears that this trend will continue long-term.

Bitcoin has started a major bull run with each halving cycle that has happened in the past. These occurred in 2012, 2016 and 2020. The next Bitcoin halving cycle is on May 5, 2024, when the mining reward will change from 6.25 to 3.125. This supports the above point. Both mean more scarcity.

Nation states have been recently flexing their financial censorship muscle against other nations and against their citizens. China, the EU, even Canada. The latest trend is the development of Central Bank Digital Currencies, or CBDCs. This forces individuals and nations to consider getting and using Bitcoin as an alternative.

Bitcoin has shown that it has a viable use case for cross-border payments. Remittances are big business, and Bitcoin could disrupt this. El Salvador was the first, and the Central African Republic was the second. If many other third world countries follow their lead, Bitcoin adoption would create massive buying pressure.