The cryptocurrency asset class is a dozen years old. Over the past 12 years, cryptos have established a reputation that has taken them on a path toward more mainstream assets, but they have a long way to go.

As of the end of last week, the asset class’s market cap stood at the $1.235 trillion level. Apple (NASDAQ: AAPL ), the world’s largest publicly traded company, had a value of over $2.38 trillion.

Cryptos are the revolutionary means of exchange that are the children of blockchain technology and represent the evolution of fintech. They are also a political movement as they take control of the money supply from governments and return it to individuals, appealing to libertarian ideologues.

For traditionalists, they are, as Charlie Munger recently said, “a threat to civilization.” Emotions on both sides run high and are likely a bit overdone.

Moreover, the incredible gains in Bitcoin , Ethereum , and many other cryptos created a speculative frenzy that reached a crescendo on Nov. 10, 2021, when they rose to record highs.

The bullish party ended on that day as the two asset class leaders made bearish key reversal patterns on the daily charts and steadily declined, reaching lows on Jan. 24, 2022.

Since then, the digital currencies have been sitting closer to the low than the mid-November high. The asset class is searching for an identity, with liquidity drying up over the past weeks.

The potential for false breaks higher and lower is rising in the current environment.

Looking great on rallies and awful on dips

In 2021, when Bitcoin was on its way to nearly $70,000 per token, many bullish analysts forecasted the leading cryptocurrency would reach the $100,000 level before the end of last year. They were wrong. 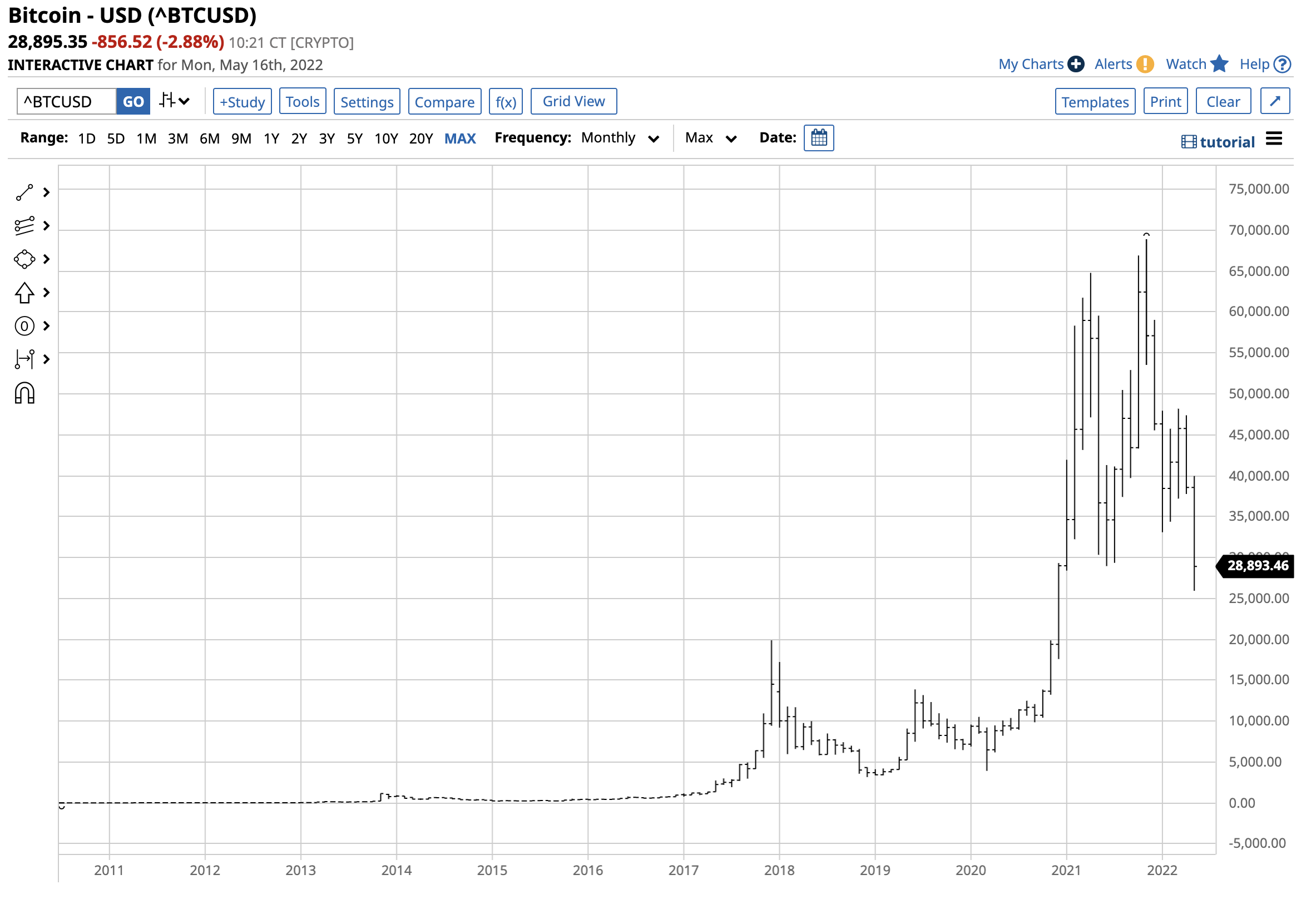 The long-term chart shows that Bitcoin ran out of upside steam in November 2021, but it does not show the price action on Nov. 10. On that day, Bitcoin and Ethereum reached their record highs and closed below the previous day’s lows.

The bearish key reversal patterns led to the selling that has taken the cryptos with the leading market caps lower since last November. Last week, Bitcoin fell to a new low in 2022 and the lowest price since December 2020 when it reached $25,919.52 per token. 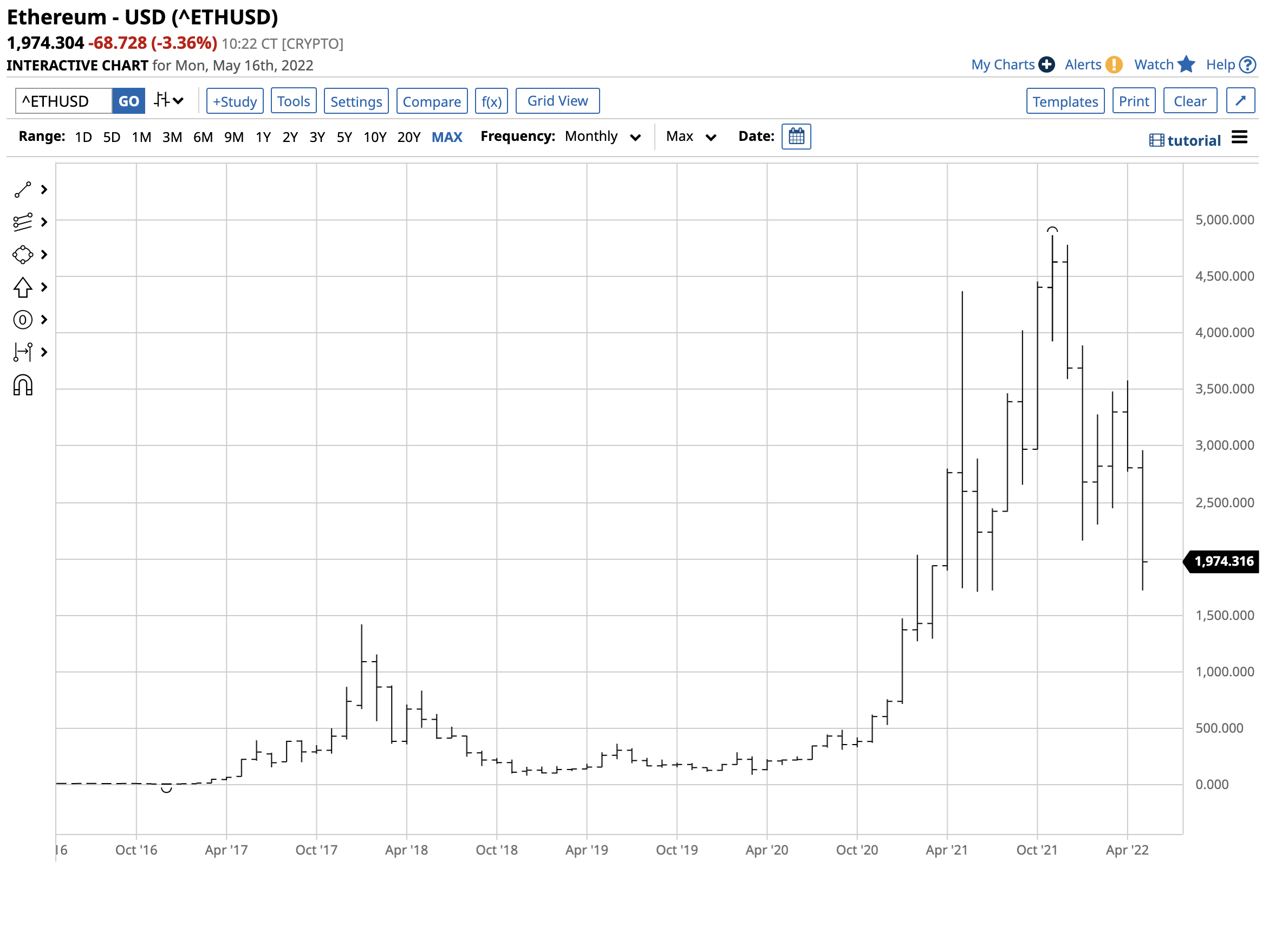 The leading cryptos looked like they were going to the moon in early November 2021. In May 2022, they are evaporating into a bearish abyss. The calls for $100,000 Bitcoin have been replaced by detractors like Charlie Munger and Warren Buffett.

At the recent Berkshire Hathaway (NYSE: BRKa ) annual cult gathering in Omaha, Warren Buffett said, “If you owned all of the Bitcoin in the world and you offered it to me for $25, I wouldn’t take it.”

Warren Buffett does not believe Bitcoin and other cryptocurrencies are productive assets. In 2018, he said, “they will come to a bad ending.” His partner Charlie Munger went further, calling cryptos “stupid and evil.” The stupidity is because they will go to “zero,” and evil is that they “undermine the Federal Reserve System.”

The debate is generational, pitting the status quo financial system against fintech. The burgeoning asset class without a long history and emerging identity has created lots of volatility, pushing and pulling prices in opposite directions. The asset class’s market cap rose to the $3 trillion level in late 2021; it was sitting at the $1.235 trillion on May 14.

Speculators are on the sidelines

Nothing can fuel a bull market like a bullish trend. In the cryptocurrency world, Bitcoin’s move from five cents in 2010 to nearly $69,000 in November 2021 encouraged a stampede of speculative buying.

The prospect of turning $100 into $138 million is a powerful and magnetic force. As the price moved higher, more and more buyers appeared in Bitcoin, Ethereum, and the growing number of tokens, offering the potential for easy and extraordinary wealth.

The Nov. 10, 2021, bearish key reversal did not immediately deter the speculative enthusiasm, and many market participants bought the initial price dips. However, the continuation of lower lows and the lack of substantial recoveries burst the speculative balloon as the hope of untold profits turned to significant losses.

While bullish trends ignite speculative buying, a bearish path of least resistance and markets that become falling knives extinguish the greed impulse, turning it to fear, pushing speculators to the sidelines as they lick their financial wounds.

Liquidity has declined - stablecoins have not been stable

The retreat of speculators had already caused liquidity to fall in the cryptocurrency arena when it faced its latest disaster last week. A stablecoin is a cryptocurrency with a price pegged to another asset, including fiat money or exchange-traded commodities.

TerraUSD ( UST ) is a decentralized algorithmic stablecoin, using complex codes to create new coins or destroy old coins to maintain a steady price at $1. Stablecoins have a governance token, providing stability. Governance was not working well last week for UST. 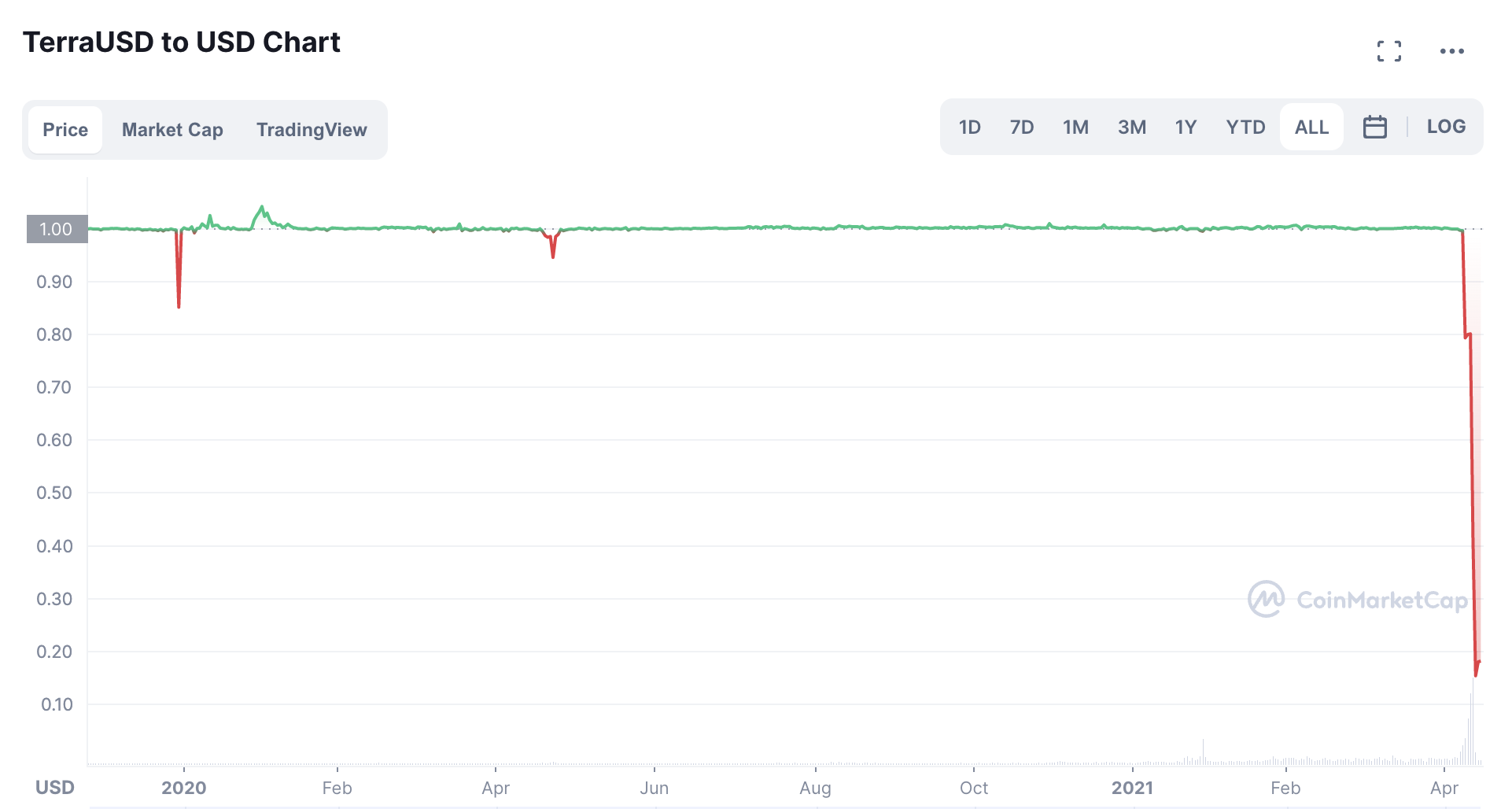 The chart highlights that after maintaining its value at or near the $1 level from November 2020 through May 7, 2022, UST became a falling knife. At the end of last week, it was worth less than 20 cents. The stablecoin was not all that stable, sending a tsunami of fear through the cryptocurrency asset class.

Tether ( USDT ), another stablecoin, has held its value for now, but the trend in most of the other over 19,400 cryptocurrencies has been lower.

The potential for higher volatility leads to false breakouts and breakdowns

The lack of upside price action has caused many speculators to leave the crypto arena. Fewer market participants cause liquidity to decline, and falling liquidity often leads to far more price volatility.

With less market participation, offers to sell evaporate during rallies, and bids to buy disappear when prices fall, causing price gaps and moves that violate technical support and resistance levels.

The decline in cryptocurrency liquidity will increase price variance over the coming weeks and months. Higher volatility increases the potential for false technical breaks to the up and downside.

Meanwhile, those calling for Bitcoin to reach $100,000 in 2021 were dead wrong, and others calling for zero in 2022 are likely to be mistaken. The risk-reward profile for cryptocurrencies has improved at lower prices, but any investment involves the potential for a total loss.

Rewards come with risk, and volatility only increases these dynamics.

Approach cryptos with extreme caution, understanding that every penny invested can lead to substantial profits, but that comes with the risk of a worthless asset.