The bloodbath in the cryptocurrency market continued during June, with nearly all the major coins suffering double-digit selloffs, as investors hoping for a bounce-back from a torrid May were severely disappointed. Digital currencies have been pressured by an array of bad news in recent weeks, including a security breach at South Korea's Bithumb crypto exchange—one of the largest exchanges in Asia.

An additional bearish driver of price action was a Bank for International Settlements (BIS) report, which said digital coins cannot scale to function as money. Though many believe the BIS relied on outdated and flawed information, according to the agency, an organization based in Switzerland made up of 60 of the world’s central banks, cryptocurrencies will not be able to scale to become a medium of exchange in a global economy.

Then there’s the recent University of Texas paper that alleges the price of Bitcoin has been manipulated for years...something many have long suspected. Indeed, the price of Bitcoin, the world's biggest virtual currency by market cap, sank nearly 15% last month to levels last seen in February. Bitcoin is off 55% since the start of the year as regulators spanning the globe stepped up scrutiny of an industry that was initially embraced by those who were distrustful of banks and government control over monetary policy. 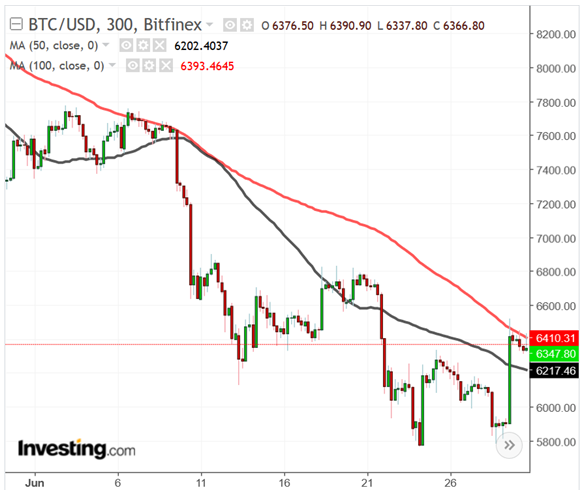 Another area of concern for crypto bulls has been the ongoing decline in overall interest in the asset class, something that can clearly be seen via a quick glance at Google search trends over recent months:

Additionally, on a technical basis, most digital currencies failed to break out of their downtrends and rise back above their respective 200-day moving averages. This usually signals that sellers are still in control.

When taking these developments into consideration, the prices of nearly all the big-name mainstream cryptocurrencies cratered this past month. As well, the value of the crypto market as a whole shrank by almost 30% from a month earlier, by around $245 million.

Highlighting just how bearish the action in crypto assets was in June, there are now just 18 digital currencies with a market cap greater than $1 billion, compared to 24 at the end of May. Of the 18, all but two closed the month lower than where they had started on the final trading day of May.

Below we focus on some of the biggest losers among the most valuable cryptocurrencies. Each logged the largest declines over the past month. We also hone in on the two surprising gainers, coins that managed to end the month with gains.

Note: This post should not be considered an endorsement, nor investment advice. It’s merely reportage. Do your own due diligence before investing in any particular asset or asset class. Coin statistics were collected on June 30, 2018. Values might differ depending upon when this article is being read.

NEO , dubbed by many crypto aficionados as the ' Ethereum of China', is a blockchain platform and cryptocurrency that enables the development of digital assets and smart contracts. The price of one NEO coin changed hands at $55.61 on June 1, before the token sank to an all-time low of $27.08 on June 29. 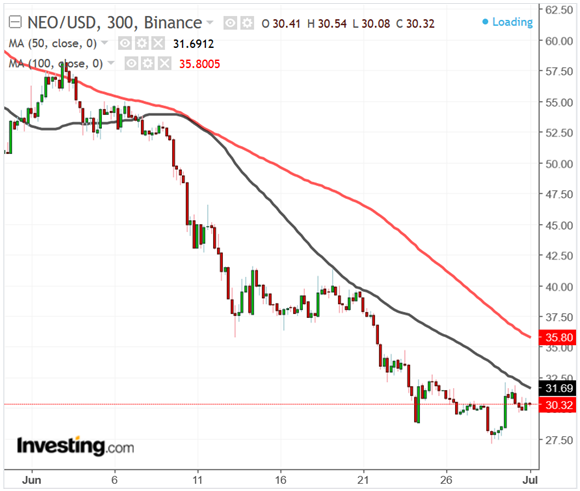 There appears to be no particular reason for the recent slide in NEO's price. Rather it seems to be mirroring the general slump experienced by nearly every one of the top 20 cryptocurrencies in the market during the past month.

From a technical perspective, NEO's chart indicates that the digital currency may have found a short-term bottom near the $27 level. On the upside, prices need to reclaim the 100-day moving average (DMA) at $31.69 for the recovery to gain momentum.

In a vote of confidence, famed cryptocurrency trader Ran Neu-Ner believes NEO is grossly undervalued. In his opinion the coin will outperform in the coming months.

IOTA is an open-source blockchain platform inspired by Internet of Things technology. The firm's blockchain network is "blockless," and allows users to make transactions on the network for free.

IOTA is down 70% so far this year, making it one of the worst performing cryptocurrencies of 2018 to this point. 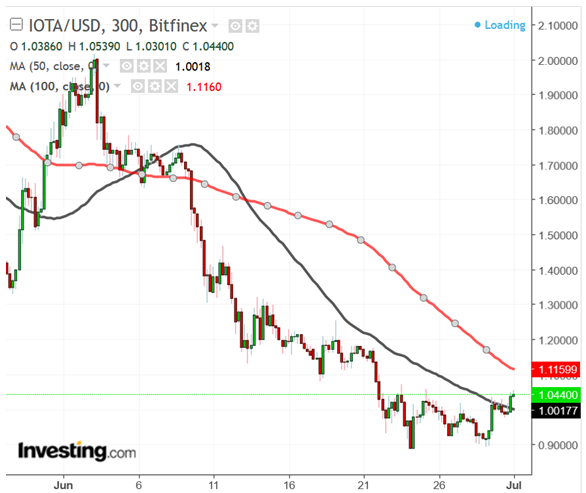 Like the rest of its crypto market peers, IOTA has been on a downward spiral over the past few weeks, with no particular fundamental catalyst driving its sharp downward trajectory. Technically, IOT/USD pushed above its 100-DMA on the last trading day of June, an encouraging sign for bulls. It next needs to reclaim the 50-DMA near the $1.1159-level in the near-term to show that selling pressure has been exhausted.

At current levels, Cardano has a market cap of approximately $3.5 billion, making it the eighth biggest cryptocoin in circulation. Year-to-date, Cardano is down 80%; it's the third worst-performing cryptocurrency for the year, trailing only QTUM and NEM . 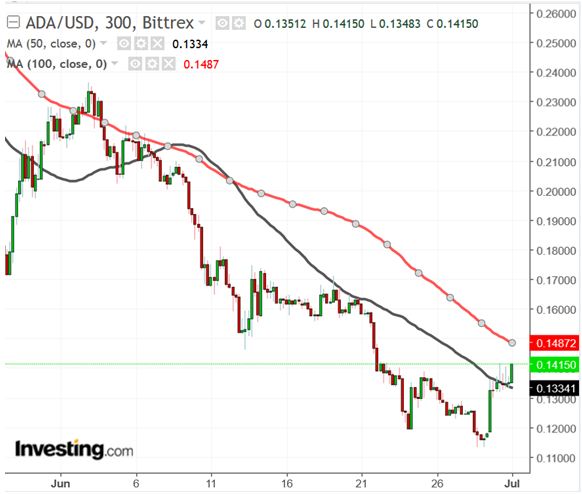 Cardano, like many other coins in the market, has seen its value shredded by ongoing price declines, though once again there's been no particular reason for the selling. From a technical standpoint, price action remains negative as long as it stays below the key 100-DMA.

That said, Cardano could be in the process of bottoming, as prices started to recover in the last few days of June. This could make it a compelling buy going forward.

Not So Honorable Mentions

Besides the three digital coins mentioned above, other big losers this month include TRON , EOS , Stellar , Litecoin , Bitcoin Cash and XRP : 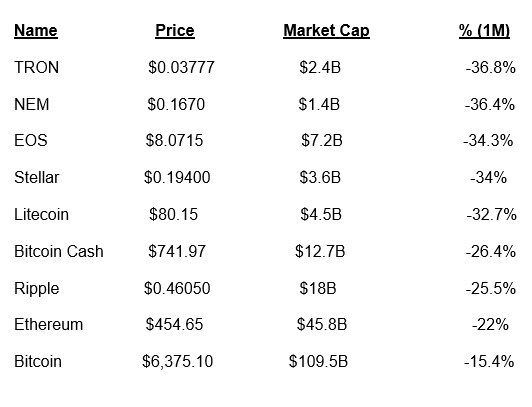 Ethereum Classic was created as a result of an Ethereum hard fork in June 2016. The new platform still offers the same features as Ethereum, such as the creation and deployment of smart contract and decentralized applications. It also has all the same specifications, such as average block time, size and reward.

It is currently the 16th most valuable digital currency in circulation with a market cap of around $1.6 billion. Nevertheless, despite June's modest gains, Ethereum Classic is still down 54% so far this year. 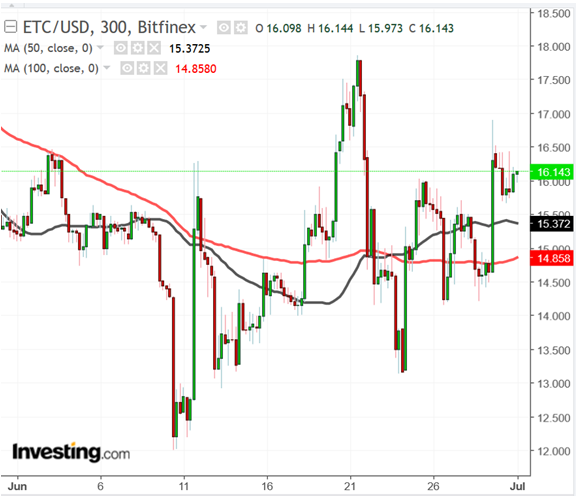 Sentiment on the alt-coin was boosted last month by Coinbase's statement on June 11, announcing plans by the globally recognized exchange to add ETC to its service "in the coming months." An exact date for the introduction of ETC will be communicated via Coinbase blog and Twitter account in due course, according to the company.

From a technical view, ETC/USD needs to stay above the key 50- and 100-DMA in the near-term to maintain its bullish price action.

Binance Coin is the signature virtual token of the popular China-based crypto exchange Binance, which supports around 100 various digital currencies and is one of the world’s leading exchanges for Bitcoin, Ethereum and Tether . Launched in July 2017, BNB is used as an alternative method for paying Binance’s trading fees.

Binance Coin's opening price on June 1 was $14.2502, before it moved marginally higher to end the month at $14.5052, for a gain of approximately 2% for June. At current prices, it has a market cap of nearly $1.6 billion, making it the 15th biggest digital currency. 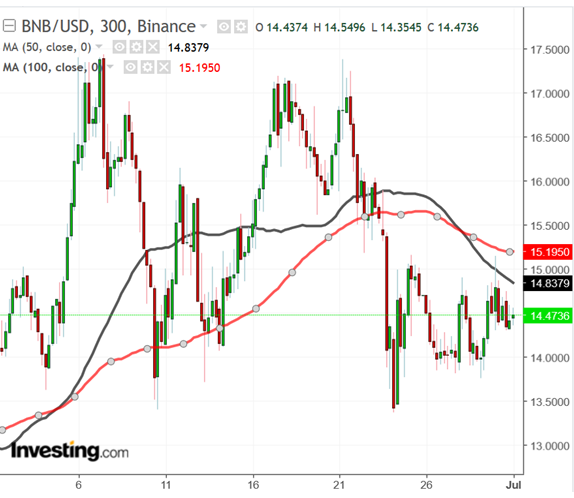 Binance Coin has been outperforming other alt-currencies in the current bearish market. It's in high demand thanks to the growing popularity of the Binance exchange. This positive trend amid the sea of negativity currently pervading cryptocurrency markets should not be underestimated.