Credit card giant American Express (NYSE: AXP ) has been enduring heavy turbulence over the past several months as fears over the Federal Reserve’s aggressive rate hike plans triggered a broad sell-off in shares of many top-rated companies.

Amex shares have since staged a modest rebound, closing at $141.65 on Thursday, but they still stand roughly 29% below their all-time high.

At current levels, the New York City-based payment processing company—one of the 30 components of the Dow Jones Industrial Average —has a market cap of $106.1 billion.

We believe the dramatic sell-off in AXP has created an excellent opportunity to buy the stock, thanks to a plethora of positive catalysts and developments.

Amex As A Hedge Against Inflation, Fed Rate Hikes

Thanks to its wide range of financial services, American Express stands to benefit directly from an inflationary environment. That’s because the credit card company earns fees as a percentage of payment volume transactions.

As the cost of goods and services goes up, the transaction size will also go up, resulting in higher fees for American Express.

Additionally, since most credit cards have a variable rate, there’s a direct correlation to the Fed’s benchmark interest rate . As the Federal Funds rate rises, the prime rate also does, resulting in higher credit card rates.

Unlike Visa (NYSE: V ) and Mastercard (NYSE: MA ), American Express is both a card issuer and a card processor, letting it keep a more significant portion of fees from the transactions it processes.

Berkshire also owns shares of Amex rivals Visa, and Mastercard, although the positions are much smaller.

At a price-to-earnings ratio of just 14.4, American Express’ stock is a relative bargain compared to V and MA, which trade at around 36.5 and 32.9 times earnings, respectively.

Amex stock also trades at a consensus forward P/E ratio of a below-market 12.8.

With an abundant amount of cash on hand and relatively low debt, AXP shares currently offer a quarterly payout of $0.52 per share, implying an annualized dividend of $2.08 at a yield of 1.44%.

Many analysts remain generally bullish on AXP, citing its solid long-term outlook. In an Investing.com survey of 25 analysts, 11 rated AXP stock as a ‘buy’; 12 rated it as a ‘hold’, and only one considered it a ‘sell’.

Among those surveyed, the stock had a roughly 37% upside potential with an average 12-month price target of $193.41. 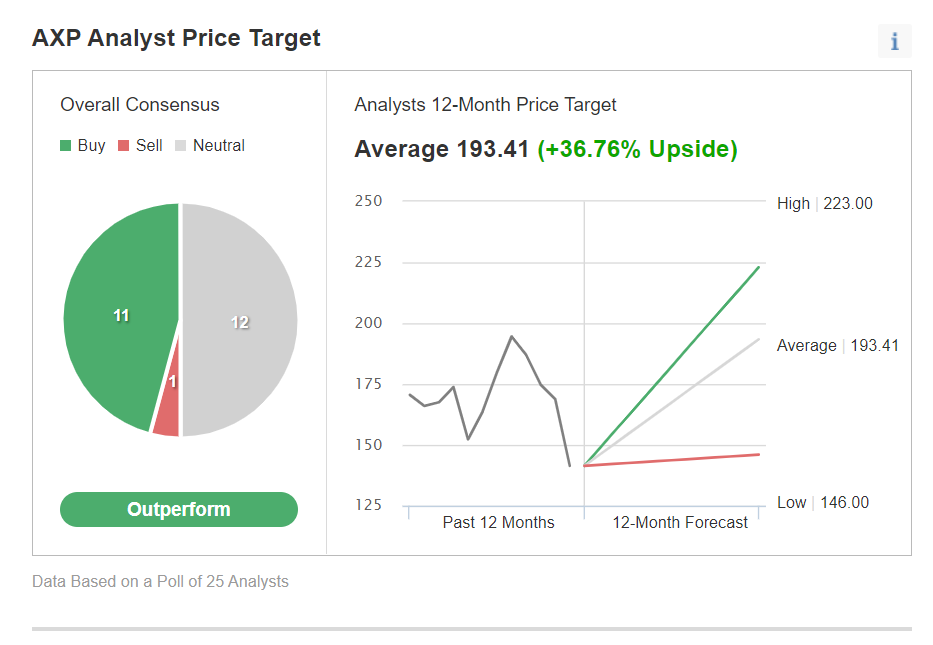 Likewise, according to several valuation models, including P/E multiples or terminal values, the average fair value for American Express’ stock on InvestingPro stands at $192.07, a potential 36% upside from the current market value. 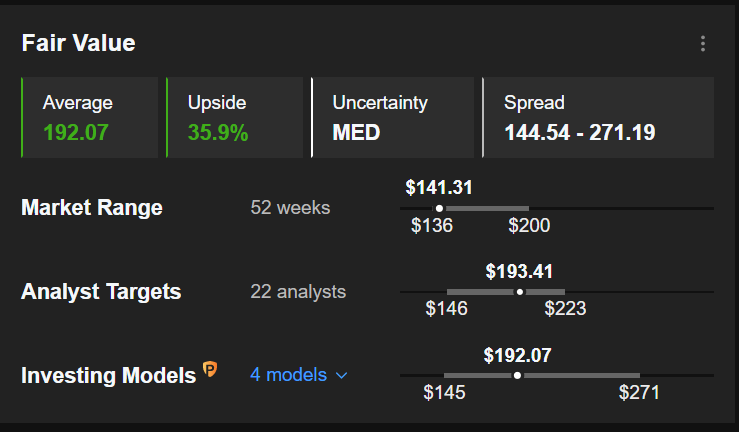 American Express, which delivered a first-quarter earnings beat and reaffirmed its guidance for 2022 despite a challenging macroeconomic environment, is scheduled to report its latest financial results before the US market opens on Wednesday, July 20.

Consensus estimates call for the credit card company to post earnings per share of $2.41 for the second quarter, falling 13.9% from EPS of $2.80 in the year-ago period.

Revenue is expected to climb 21.1% year-over-year to a record high of $12.4 billion, reflecting a robust combination of rising spending volumes and growing transactions.

Beyond the top-and-bottom line numbers, investors will keep an eye on the performance of AmEx’s crucial travel-and-entertainment business to see if it can keep up its scorching pace of growth as travel levels return to pre-pandemic levels.

Goods and services spending, which grew 21% year-over-year in the preceding quarter, will also be in focus.