Cryptocurrency, fiat currency, and gold and silver have one thing in common. The intrinsic value depends on the market’s consensus on value. Cryptos and fiat currencies’ values rely solely on faith. While gold and silver have industrial and ornamental applications, investment demand, or faith in their value, is the primary determinate of the path of least resistance of prices.

Gold is the metal that governments, central banks, and monetary authorities hold as an integral part of their foreign exchange reserves, validating gold’s role in the worldwide financial system. Silver is far more volatile in comparison, but the price tends to follow its precious-metal cousin higher and lower. Silver’s lower cost and higher volatility attract far more speculative interest when the price is trending higher or lower.

In the world of cryptocurrencies, if Bitcoin and Ethereum are analogous to gold, then Dogecoin is their silver. Each DOGE unit is a fraction of the price of Bitcoin and Ethereum and has developed a history of wide price variance that could make it the speculative crypto of choice for market participants looking to hop on board during a rally.

Elon Musk’s empire is like the universe—it is expanding. Aside from Tesla (NASDAQ: TSLA ), the world’s leading electric-vehicle maker, he is the founder, CEO and chief engineer at SpaceX. His portfolio also includes The Boring Company, which addresses traffic and logistical issues in cities by constructing tunnels. He co-founded Neuralink in 2016, a company that creates devices to embed in the human brain, facilitating merging with machine technology. Musk explains the product as “a Fitbit in your skull.”

Musk made millions from interests in Zip2 and PayPal (NASDAQ: PYPL ). Tesla’s growth made him billions and vaulted him to become the world’s wealthiest person. In April, he offered $44 billion for Twitter (NYSE: TWTR ), the social media platform. He plans to take the company private, expanding his empire.

Musk is a modern-day Leonardo da Vinci or Thomas Edison, with an expanding portfolio of diversified businesses. He is also a cryptophile, holding a portfolio of cryptocurrencies. Over the past years, he developed a particular affinity for Dogecoin, the crypto that began as a joke and grew into a top-tier digital currency. Musk is so enamored with DOGE that he owns a Shiba Inu puppy named Floki. The Shiba Inu is DOGE’s mascot and brand. Each time Musk tweets about DOGE, the cryptocurrency’s price volatility tends to soar.

11th Leading Asset In Its Class 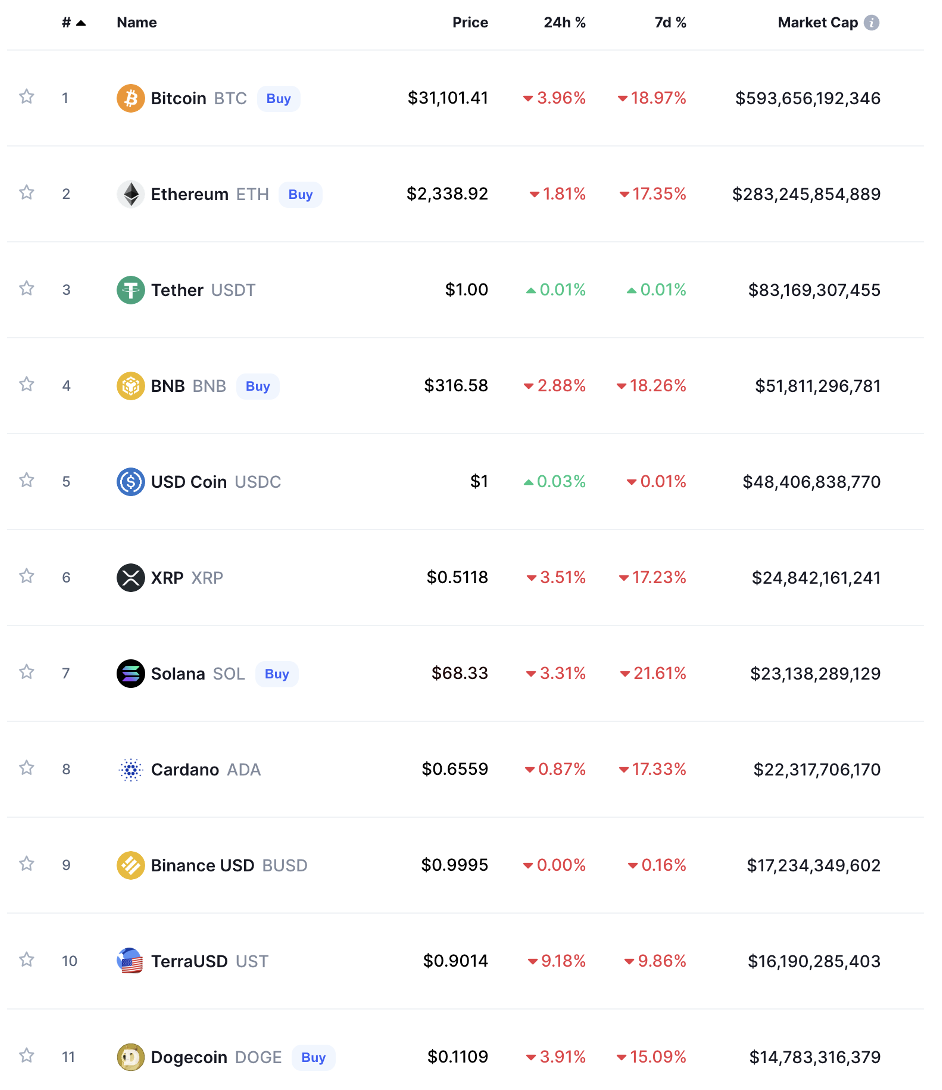 The chart shows that at 11.09 cents per token, DOGE’s market cap stands at more than $14.78 billion. DOGE’s position affords the crypto the liquidity and critical mass that is no joke.

Cryptocurrencies are alternative means of exchange. Devotees like Musk, Jack Dorsey, and others believe cryptos will compete with fiat currencies over the coming years. While central banks and governments can issue fiat legal tender to their heart’s content, crypto values are untouched by government interference. Their values are solely determined by bids to buy and offers to sell in the market.

Since sentiment determines price levels and, with over 12,300 cryptos to choose from, branding and positioning in the market are critical success factors. Musk’s adoption of DOGE as his pet crypto and its Shibu Inu mascot has created a tremendous following. 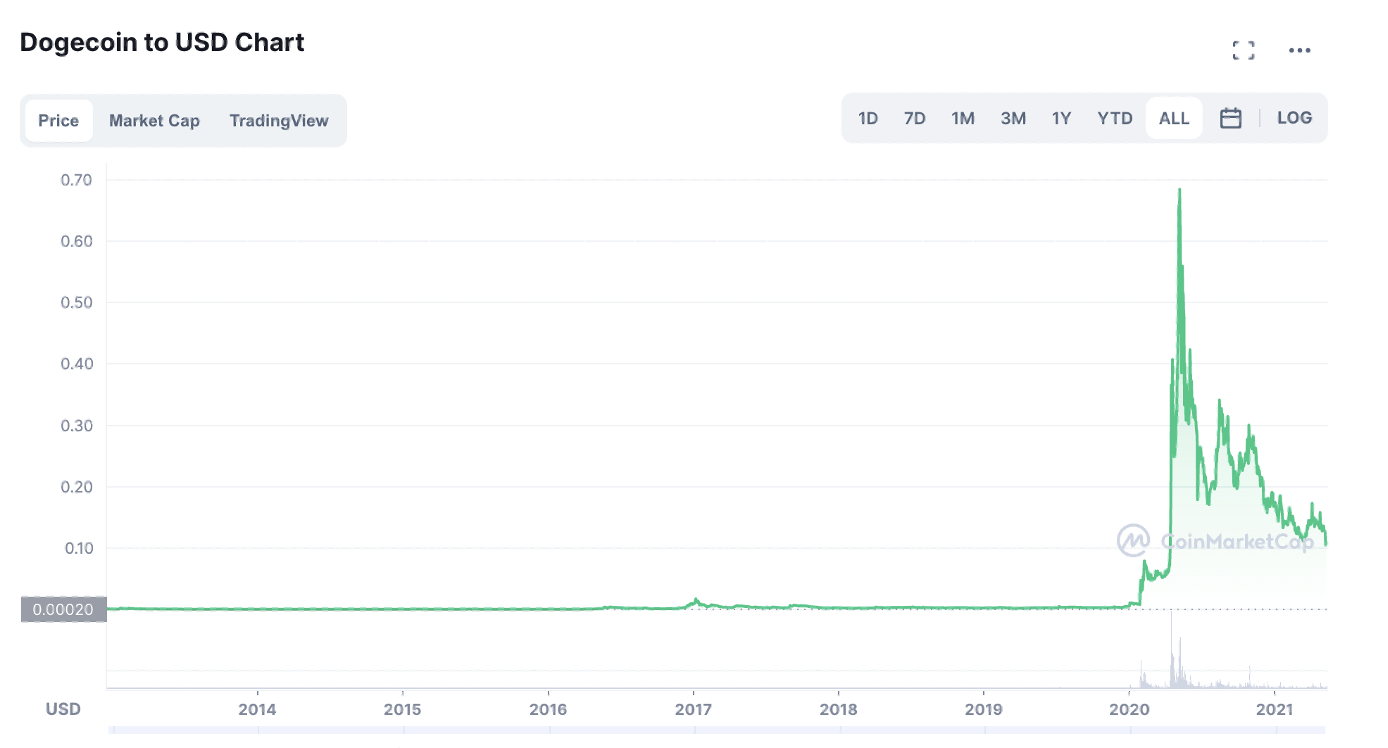 The chart shows that DOGE was mainly at a fraction of one penny from 2013 through early 2021. Musk’s interest pushed the price to a high of nearly 70 cents per token in May 2021. At the 11.09 cents level on May 10, DOGE corrected lower with the rest of the asset class. However, the crypto remains at multiples of its pre-2021 price level.

Bitcoin’s rise from 5 cents in 2010 to nearly the $69,000 level in November 2021, and its current price level at more than $30,000 per token, created a speculative frenzy in the cryptocurrency asset class.

At the 11 cents per token level, investors and speculators have flocked to DOGE as it moved higher and lower with the other asset class members. A low per-token-price creates a magnetic psychological attraction for investors and speculators dreaming of Bitcoin-like returns. The Shiba Inu brand and Musk’s participation increase the crypto’s appeal.

High interest rates, a rising US dollar and volatility in markets across all asset classes have weighed on cryptocurrency prices since November 2021. Bitcoin and Ethereum are the market leaders, with approximately 61% of the asset class’s market cap, and the leaders tend to dictate the path of least resistance of all crypto prices.

Bitcoin and Ethereum are searching for bottoms. If the price action over the past years repeats, other substantial rallies could be on the horizon in the coming weeks, months, and years. When they take off on the upside, DOGE is likely to follow like an obedient Shiba Inu puppy, with Musk cheering his favorite crypto via his new toy, the world’s leading social media platform.