When Bitcoin and Ethereum rose to new all-time highs on Nov. 10, 2021, it was a watershed for cryptocurrency markets. The two largest digital tokens by market cap peaked, then immediately ran out of upside steam with both closing the session below the previous day’s lows. The bearish key reversal pattern was a technical red flag.

On Jan. 24, Bitcoin and Ethereum, the leaders with more than 60% of the asset class’s market cap, reached lows. Their prices have since consolidated above the Jan. 24 lows until May 6, when they made higher lows.

The wedge pattern of lower highs and higher lows suggested that the cryptocurrencies became tightly coiled springs, preparing to break out to either the up or downside. On May 9, the break came, and it was lower. The bear market in cryptos remains intact after the latest lower low.

Anyone shocked about the crypto carnage needs to put the price action in perspective. Cryptocurrencies have given a new meaning to the term volatility and it will likely continue.

After falling from the Nov. 10 record high to the Jan. 24 lows, Bitcoin and Ethereum prices digested the move and consolidated closer to the low than the late 2021 high. 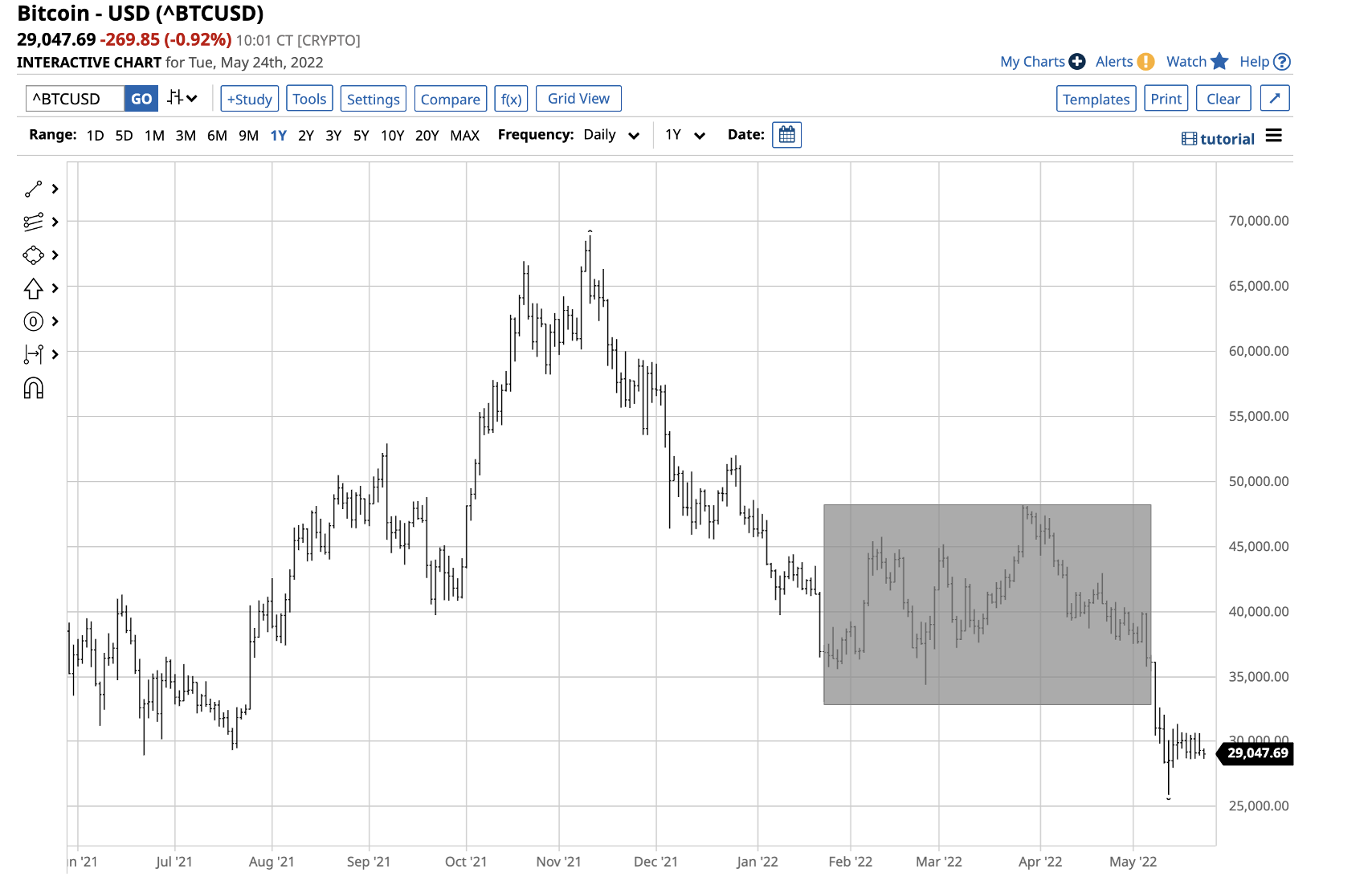 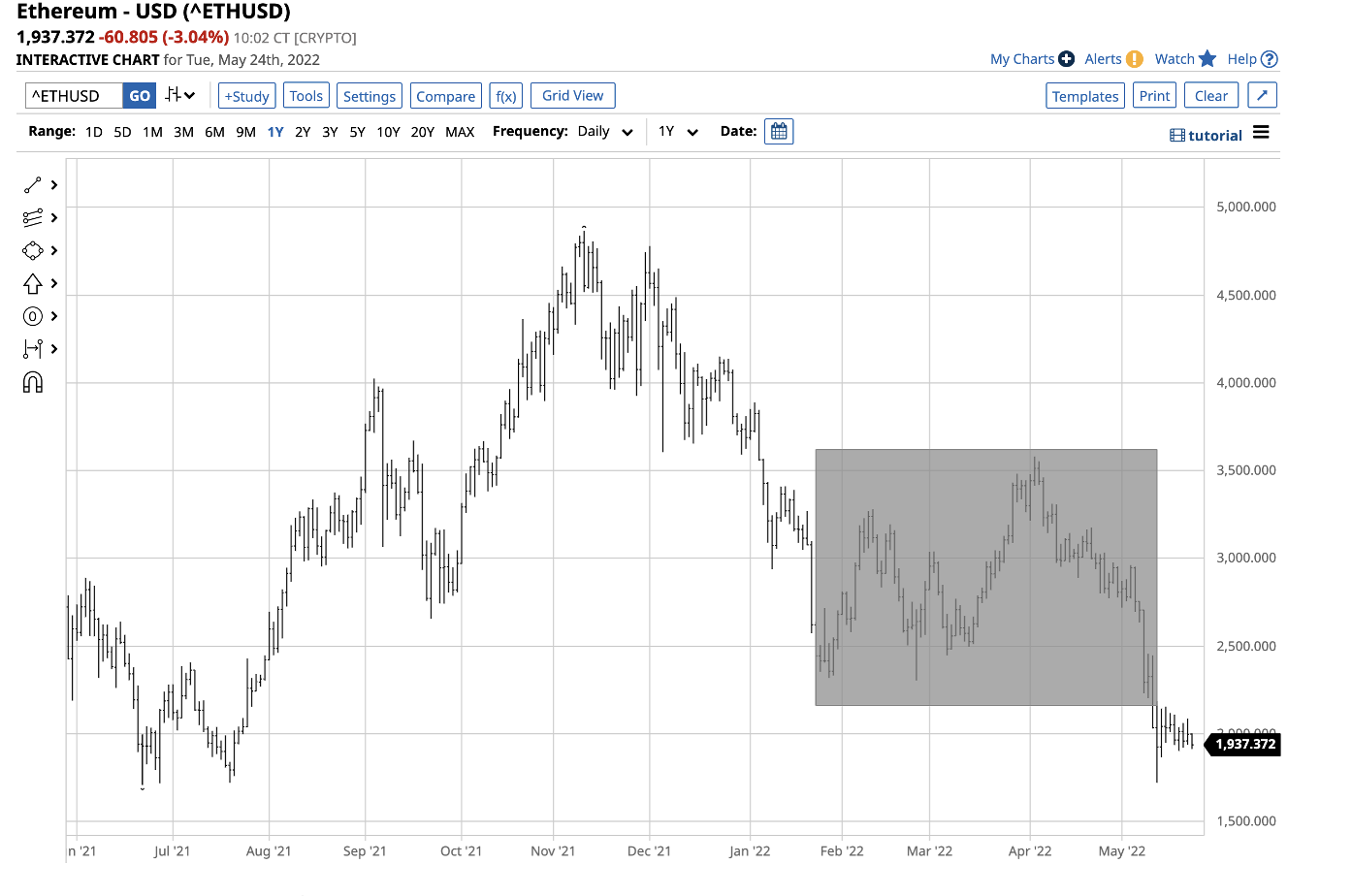 At time of publication on May 26, Ethereum and Bitcoin prices were below the Jan. 24 lows and establishing a consolidation pattern in a lower price range.

Crypto Critics Say, ‘I Told You So’

A few short years ago, Jamie Dimon, the chairman and CEO of America’s leading banking institution, JP Morgan Chase, called Bitcoin a “fraud”. In 2022, at the Berkshire Hathaway annual gathering in Omaha, Nebraska, legendary investor Warren Buffett said Bitcoin does not produce anything. He also said:

“If you told me, you own all of the Bitcoin in the world, and you offered it to me for $25, I wouldn’t take it because what would I do with it? I’d have to sell it back to you one way or another. It isn’t going to do anything.”

“In my life, I try to avoid things that are stupid and evil and make me look bad in comparison to somebody else—and Bitcoin does all three. In the first place, it’s stupid because it’s still likely to go to zero. It’s evil because it undermines the Federal Reserve system. And third, it makes us look foolish compared to the Communist leader in China. He was smart enough to ban Bitcoin in China.”

Many of the most successful investors and banking leaders have rejected cryptocurrencies over the past years, viewing their rise as the tulip bulb mania that gripped the Netherlands in the 1600s.

But ideological Supporters Cheer Opportunity To Buy The Dip

Since cryptocurrencies represent the evolution of the fintech revolution that involves blockchain, many technology leaders have embraced cryptocurrencies. Peter Thiel, a venture capitalist and co-founder of PayPal, called Warren Buffett Bitcoin’s “enemy number one” and referred to the legendary investor as “sociopathic grandpa from Omaha.” Block founder Jack Dorsey, Tesla CEO Elon Musk, and a host of other technology founders and leaders have supported the asset class, putting their money where their mouths are with substantial investments in Bitcoin, Ethereum, and other cryptos.

The ideological supporters tend to be libertarian, rejecting the government’s role in controlling the money supply and returning it to individuals. While short-term speculators caught in the selloff that began in mid-November are licking their financial wounds, proponents of the asset class are using the current selloff as a buying opportunity.

Over the past years, cryptocurrencies have made significant progress toward becoming mainstream assets. However, they continue to face issues that impede the asset class’s growth. Custody and security remain substantial roadblocks, as computer hacking is a clear and present danger. North Korea, Russia, China, Iran, and other countries have significant hacking abilities that have resulted in thefts. Moreover, ransomware for payment in cryptos has increased over the past years.

At the same time, the most significant roadblock comes from governments and regulators, as cryptocurrencies threaten their control of the money supply. While government officials and regulatory agencies cite the dangers of cryptos in the underbelly of the global economy, their motivation is to keep control of the purse strings, a critical source of political and economic power.

The speculative enthusiasm over the past years has declined with crypto prices since November 2021. The lower the prices drop, the more the detractors will say, “I told you so,” while supporters will pick up what they perceive to be bargains. Meanwhile, a return of speculative interest will only come with a recovery that takes the prices above their declining technical resistance levels.

Sentiment is the most significant factor driving prices higher or lower in markets across all asset classes, and cryptos are no exception. Blockchain technology has widespread acceptance, while cryptos are another story. Though there are likely potential profits to be made for those with patience and the appropriate risk tolerance, only invest the amount of capital you are willing to lose, as the possible rewards come with commensurate risks.

The price action over the past decade suggests that Bitcoin, Ethereum, and many of the other more than 19,540 tokens will find bottoms and experience significant corrections. Since 2010, buying during periods of price carnage has been the optimal approach, and the current price trends could be the perfect time to consider adding some crypto to your nest egg before the frenzy reignited in the cyclical market.

We should never be surprised by explosive or implosive price action in cryptocurrencies, as they have given completely redefined the meaning of volatility.