The South African Reserve Bank’s Monetary Policy Committee (MPC) meeting next week will be the third one since the beginning of the year. In the previous meeting, the MPC unanimously decided to keep the repo (policy) rate steady at 3.50% per annum, aligning with our and market expectations. Since the March 2021 meeting, the rand has strengthened by just over 6% and is materially stronger than the SARB’s implied starting point of R14.96/$ at that meeting. Commodity prices have also continued to increase; some, such as copper and iron ore, had cumulative double-digit growth.

Our view is that the MPC will keep the repo rate steady at its meeting next week (on 20 May 2021), although some MPC members’ views are likely to have altered since the previous MPC meeting given the local and international economic developments.

Still, there is a reasonably strong case, at least for now, for the MPC to keep the policy rate steady next week and over the near-term horizon. Around this time last year, the May 2020 MPC meeting was the fourth meeting of the year. The third meeting was an unscheduled meeting of 14 April 2020. In that meeting, the MCP decided to cut the policy rate by 100bps to provide much-needed support to the economy (and financial markets) that had been severely impacted by the pandemic. In other words, concerned about the impact of the pandemic, the SARB MPC justifiably ended up having seven meetings in 2020 compared to the usual six MPC meetings for the year

Although a solid economic growth rebound is expected this year, the damage to the economy was severe in 2020, and its impact lingers.

At the end of 4Q20, the Stats SA’s Quarterly Labour Force Survey (QLFS) data indicated that the economy had only recovered around 39% of the 2.2 million jobs lost in 2Q20. The official unemployment rate measured 32.5% (Seasonally adjusted: 33.2%) in 4Q20, materially above its long-term arithmetic average of 24.3% (1994-2019). There is continued spare capacity in the economy, with manufacturing utilisation having measured 74.0% in 1Q21 relative to 77.5% in 1Q20. In addition, the economy has been in the longest downward phase of the business cycle (since 1946). The SARB pronounced that the economy entered this phase in December 2013. Economic growth has lagged behind population growth over the past five years.

Domestic consumer inflation, on the other hand, has started accelerating, and this should continue over the next few months. However, we view this as transitory given the continued labour market slack and spare capacity in the economy. Temporary inflation increases are a global concern, but policymakers have guided their monetary policy strategy to look through short-term fluctuations. Domestic (and global) factory prices are also rising, but the degree to which businesses pass costs on to domestic consumers should remain limited. We expect domestic consumer inflation to peak at just over 5% in May, and steadily moderate towards the 4.5% preferred midpoint of the 3% to 6% inflation target range by the end of 2021.

Consequently, at least at this stage, there is an economic justification for continued monetary policy accommodation. In other words, the SARB should resist the 25bps hike for 1Q21 suggested by its Quarterly Projection Model (QPM) in the previous meeting. But there is also an even greater need for more implementation of economic reforms to boost confidence, stimulate private sector investment and lift trend growth. 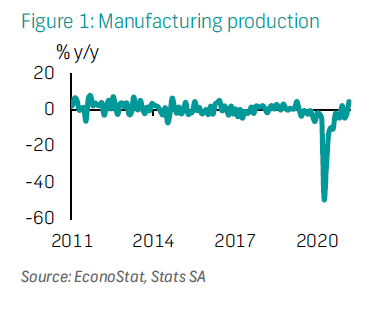 Total manufacturing output (not seasonally adjusted) grew strongly by 4.6% y/y in March after declining by 2.5% y/y in February. The out-turn was much better than the Bloomberg consensus expectation of meagre growth of 0.4% y/y. Seasonally adjusted manufacturing output, which aligns with the official calculation of quarterly real GDP growth, grew by 3.4% m/m after declining by 1.1% m/m in February. As such, quarterly growth in seasonally adjusted manufacturing production steadily moderated to 0.2% q/q from growth of 33.2% q/q in 3Q20 and 5.3% q/q in 4Q20. This implies that the manufacturing sector had a mildly positive contribution to overall real GDP growth in 1Q21 – this is in line with our view that economic growth steadily moderated in 1Q21, from 13.7% q/q in 3Q20 and 1.5% q/q in 4Q20.

This data does not change our view of the manufacturing sector’s near- to medium-term economic activity. Manufacturing production growth should rebound from lockdown-induced low base effects in 2020, and performance should benefit from easier lockdown restrictions as well as improving local and external demand. The external environment has supported the manufacturing sector’s exports, with export values having posted average monthly year-on-year growth of 12.7% since September 2020. In particular, export values of machinery equipment have posted an average growth rate of 21.9%, while that of vehicles and associated transport equipment has averaged 12.2% since September 2020.

The extent of manufacturing inventory drawdowns last year alongside rising demand and the cost of raw materials, particularly if it is to be sustained, could mean that some manufacturing segments could rebuild inventories. The purchasing managers’ index tracking expected business conditions in six months climbed by 10.7 points to 67.9 points in April from 57.0 points in March, indicating that manufacturers’ views in April reflected improving operating business conditions at least over the near-term horizon.

We are, however, concerned about the third wave of infections which could disrupt economic activity. Nonetheless, we do not think that the government will implement stricter lockdown restrictions amid an economy that has just emerged from the deepest contraction since 1920. Manufacturing utilisation was lower at 74.0% in 1Q21 relative to 77.5% in 1Q20, mainly due to an increase in underutilisation related to “other reasons” (such as downtime due to maintenance and productivity changes) and an increase in the shortage of raw materials.

Total mining output (not seasonally adjusted) grew by 21.3% y/y in March, up from a downwardly revised contraction of 2.3% y/y (previously: + 0.8% y/y) in February. Non-gold mining production grew by 23.2% y/y following a 1.1% y/y contraction in February. The out-turn for overall mining production growth was materially above the Bloomberg consensus prediction for growth of 9.4% y/y. Sustained higher commodity prices and rising external demand remain supportive of mining activity. However, the more robust growth in mining output could largely be attributed to reduced output levels from last year’s supply chain disruptions and lockdown restrictions (i.e. the lower base effect in 2020). Due to this phenomenon, mining output will undoubtedly post more robust year-on-year growth rates in April and May. 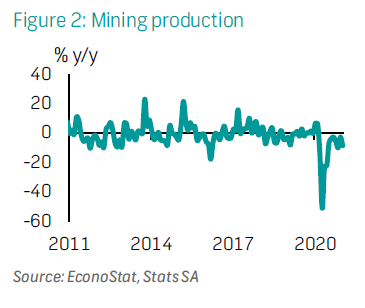 Encouragingly, the seasonally adjusted mining output, which aligns with the official calculation of quarterly real GDP growth, grew by 4.5% m/m in March following downwardly revised growth of 0.9% m/m (originally: 3.8% m/m) in February. Overall, seasonally adjusted mining output grew by 3.9% in 1Q21 after contracting by 1.6% in 4Q20 – therefore, this means that the mining sector meaningfully supported overall real GDP growth in 1Q21. Our estimate is for the sector to have contributed around 0.3ppt to overall quarterly real GDP growth.

So far, this data print and the manufacturing output data published earlier this week implies that the South African economy avoided a double-dip recession in 1Q21. Next week’s retail sales will provide further clarity on how the economy fared in 1Q21. Last year’s growth for the agricultural sector is expected to be sustained.

Next week’s retail sales will clarify how the economy fared in 1Q21 and, importantly, indicate whether consumer spending momentum held up in March. Retail sales volumes increased by 2.3% y/y in February, following a disappointing 3.7% decline in January. This was the first annual expansion in sales volumes in almost a year (since March 2020).

Nevertheless, year-to-date volumes still lag behind 2020 levels by 0.7%. On a year-to-date basis, the decline has been driven by the “Other” retailers and Food and beverages retailers. Lower volumes by “Other” retailers were likely driven by lockdown-impacted items, such as sports goods and entertainment. Work from home, and relatively limited mobility in general, would also have damped demand for jewellery and watches. The Food category was primarily driven by the ban on alcohol sales, which came into effect on 28 December 2020 and lasted until 1 February, after which restricted offsite consumption was permitted. As such, while February volumes jumped to 8% y/y, reflecting pent-up demand induced by the lifting of liquor sales restrictions, this was not enough to lift year-to-date volumes to 2020 levels. 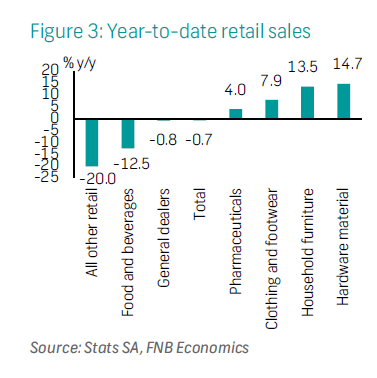 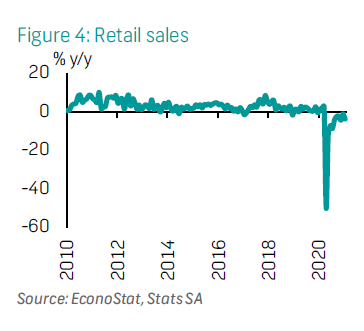 The most significant increases in volume sales were household-related items: hardware material and household furniture and appliances. These are driven by the increase in working from home, as consumers improve their living spaces and, in some instances, repurpose them to facilitate remote work better. Complementary support has also come from buoyant home-buying activity.

The relatively strong rebound in clothing and footwear has been a bit of a surprise. We suspect this is largely pent-up demand, stimulated by recovery mobility in the first two months of the year. Indeed, clothing and footwear volumes declined by 12.1% in 2020, having plunged by 94.5% y/y in April 2020, when lockdown regulations were strictest. Pharmaceutical and medical products have also performed well so far, boosted by the resurgence in Covid-19 infections. Volumes spiked by 9.3% y/y in January 2021, corresponding with a peak in infections.

April CPI will also be released this next week. In March, consumer inflation began its upward trajectory, rising to 3.2% y/y from 2.9% in February, driven mainly by food and non-alcoholic beverage inflation and transport costs. Bloomberg consensus is for an uptick of 4.3% y/y. We expect domestic consumer inflation to peak at just over 5% in May and steadily moderate towards the 4.5% preferred midpoint of the 3% to 6% inflation target range by the end of 2021. 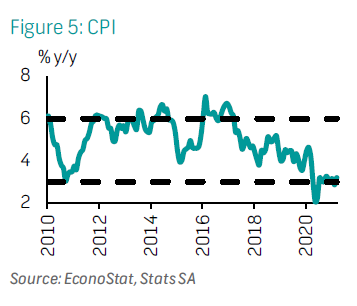