In a previous report we outlined two recent waves of mortgage bond demand following a decent fall in interest rates in 2020. The first was driven by young first-time buyers and the second by older, repeat buyers. Delving further into market-wide transactions data provides interesting insights into the participation of women in property purchases. Since 2019 property transactions by women were just shy of half a million, the majority of those being first-time purchases of full title properties. When compared to purchases by men, women have dominated first-time purchases, accounting for 57%, but took up 47% of repeat purchases – the percentages remain the same when considering the period since 2020. This reflects a positive development of women building wealth, even during a period in which women experienced over 700 000 (net) job losses and with the economy only absorbing 35% of working age women on average. Still, the underrepresentation in repeat purchases, particularly among younger age groups, signals an underrepresentation of women in investment property purchases. 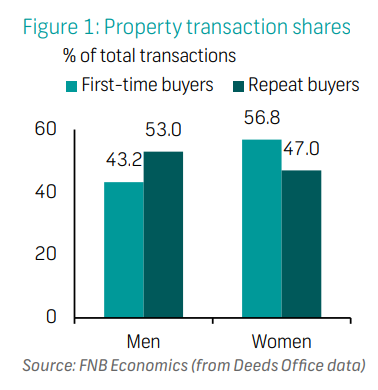 Most of the property transactions are located in Gauteng (with 35% of transactions), followed by the Western Cape (21%) and KwaZulu-Natal (10%). Transactions in other provinces are 4% on average. These shares are mirrored when separating first-time and repeat purchases, i.e. Gauteng dominates both first-time and repeat purchases. Of the first-time buyers, the majority fall in the ages 25-45 – dominated by the 30-35 band where participation accounts for 20% of transactions. Beyond this bracket, participation falls to a low of 5% for ages 60-65, before rising to 9% for women older than 65 who possibly take advantage of pension payouts. As expected, older age groups dominate the repeat buyer segment, the majority of which falls in 35-55 age group with most participants in the 45-50 band. When compared to first-time buyers, more women above the age of 65 are repeat buyers, taking up a share of 11%. 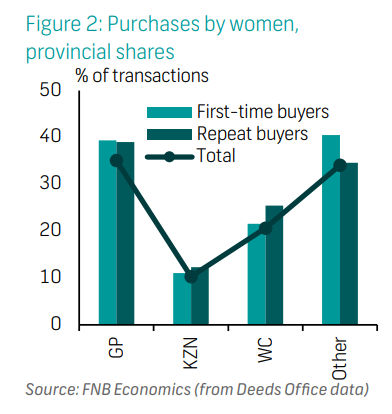 Stats SA’s 2019 marginalised groups indicator showed that 42% of households are headed by women; in fact, women head 32% of nuclear households and 49% of extended households. Worryingly, 41% of women-headed households do not have an employed household member and these households are quite dependent on the social grant system. This highlights the importance of building SA’s potential growth in order to strengthen the labour market’s ability to absorb more women. The positive side of the pandemic shock is the opportunity to recognise and alleviate vulnerabilities in many industries, including the hospitality industry and generally informal markets – ensuring that earnings can be better hedged during times of uncertainty. The latest unemployment figures show that women are more likely to be in unpaid work and less likely to be employers. There is also an opportunity here for women to participate in labour in ways that are optimal to their livelihoods and better capacitating them to build wealth. 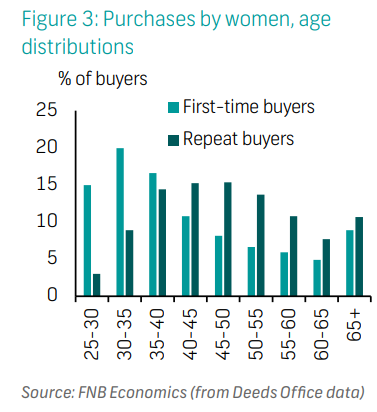 As of 26 August 12 771 new Covid-19 cases have been reported. The seven-day moving average of infections stood at 11 760, reflecting a 2.2% w/w decline. In Gauteng and the Western Cape the seven-day moving average of infections declined by 24.2% w/w and 14.0% w/w respectively. Meanwhile, infections increased by 13.2% w/w in KwaZulu-Natal. Infections in the Eastern Cape, Free State and Northern Cape are rising w/w, while declining in Limpopo, Mpumalanga and North West. So far, Covid-19 infections have amounted to 287 580 in August compared to 473 421 in July. At an aggregate level, July represented the peak of the third wave of Covid-19 infections. However, scientists are predicting the fourth wave before year end. This is worrying given the vaccine hesitancy among some individuals. Encouragingly, adults aged between 18 and 34 years old can also now be vaccinated.

The Delta variant infections are a concern at a global level and are forcing countries to impose lockdown restrictions on economic activity. Japan recently extended its emergency lockdown, and infection rates are rising in South Korea, Malaysia, the Philippines, Vietnam and Thailand. Strict lockdowns have also been imposed in Australia and New Zealand. The Reserve Bank of New Zealand left its policy rate steady at 0.25% on 18 August, following a level 4 restriction on economic activity across New Zealand. China had earlier (on 11 August) shut down its Meishan Terminal of the Ningbo port after a worker tested positive. The Ningbo port is the world’s third busiest container port. Nevertheless, the port has since partially resumed berthing operations and its activity should be fully restored by the end of next week.

The renewed lockdown restrictions are sparking fears that the Delta variant could limit the global economic recovery. 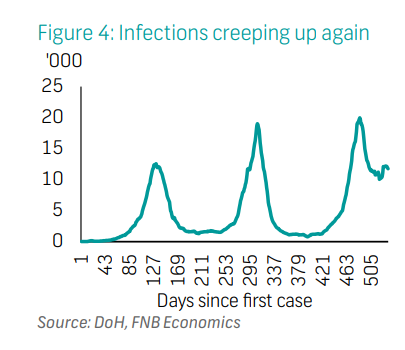 The leading business cycle indicator eased in by 2.3% m/m (27.6% y/y) in June, after increasing by 2.4% m/m (36.9% y/y) in May and 3.6% m/m (31.4% y/y) in April. All the underlying components with recent data showed declines, led by a fall in the number of residential building plans passed and SA’s index of export commodity prices. The 3Q21 RMB/BER Business Confidence Index results will soon be another source of information included in the leading indicator and will likely show a moderation, following the unrest in July and lockdown restrictions related to the third wave of Covid-19. 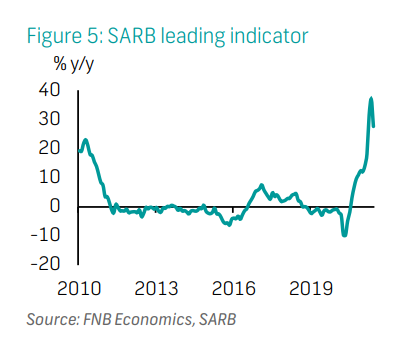 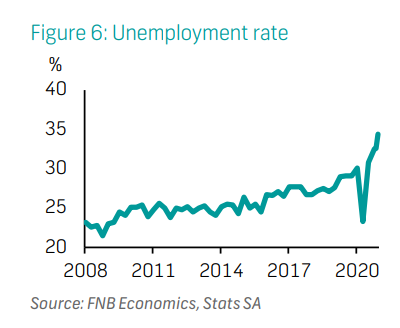 Producer inflation eased to 7.1% y/y in July, down from 7.7% y/y in June and 7.4% y/y in May. However, producer price pressures remain elevated at 0.7% m/m. Petroleum products continue to provide upward pressure to producer prices. Excluding petroleum-related product prices, producer inflation would be nearly a full percentage point below the headline figure, at 6.2% y/y. Intermediate producer prices also reflect global supply and demand imbalances, with items like basic iron and steel posting annual inflation of over 40%, while chemicals and plastic products posted inflation of over 20%. 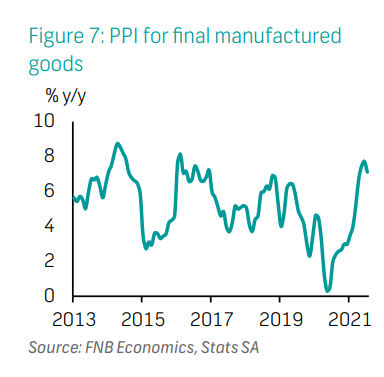 On Tuesday private sector credit extension data for July will be published. Private sector credit extension remained marginally in contractionary territory in June, recording a decline of 0.5% y/y from a -0.4% y/y reading in May. We continued to see divergent trends between corporate and household credit – partly reflecting base effects and how the two sectors approached credit uptake in the first half of 2020. The June decline was primarily due to corporate credit, which contracted 5.2% y/y, following a 5.0% decline in May. In contrast, household credit extension recorded a robust 5.6% y/y, unchanged from the month prior. 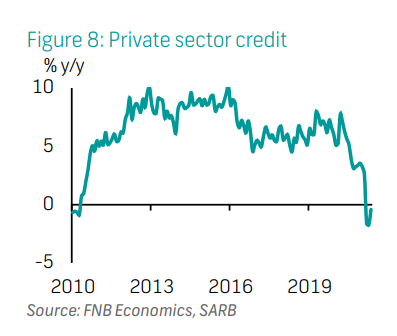 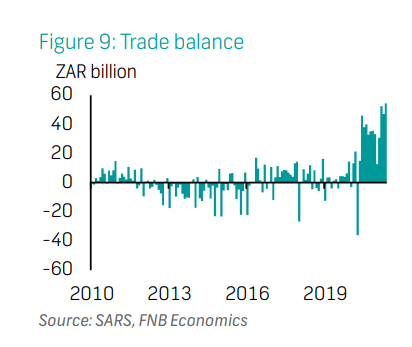 Data on new vehicle sales for August will be published on Wednesday. After recording 20.2% growth in domestic sales and 50.9% growth in export sales in June, new vehicle sales growth dropped to 1.7% y/y and -33.1% y/y respectively in July. This was on the back of damage to property and infrastructure as well as lost sales orders during the civil unrest. In addition, a cyberattack on Transnet resulted in the entity declaring a force majeure from 22 July, creating logistical challenges on the N3 highway as well as at SA’s major ports. This affected the production and delivery of vehicles as the international flow of automotive goods was disrupted. Despite the large drop in exports, year-to-date figures were still 47.3% higher than a year earlier. This showed that improved mobility and rebounding trading partner growth continued to support exports, but this too has been recently threatened. 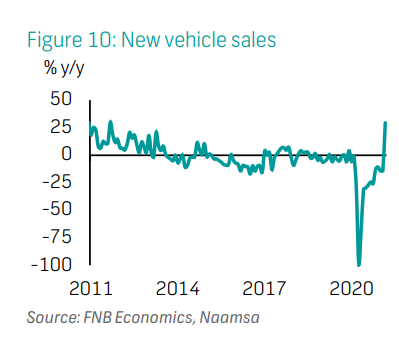 On Wednesday the Absa manufacturing PMI survey outcome for August will also be published. The PMI declined by 14 index points from 57.4 index points in May to 43.5 in June, the lowest level since May 2020 when the country was under strict level 4 lockdown. The negative impact of the adjusted level 4 lockdown and the unrest, which disrupted supply chains and production, affected activity. Business activity, new sales orders and inventories plummeted, reflecting in a loss in potential output and export sales orders. Slowing supplier delivery times still reflected supply chain disruptions, which were exacerbated by the unrest and the cyberattack on Transnet. The employment indicator also showed losses – indicating that meaningful job gains in the manufacturing sector are unlikely in the near future. The previous survey indicated that manufacturers expected an improvement in business activity with lighter lockdown restrictions and an abatement of the unrest. 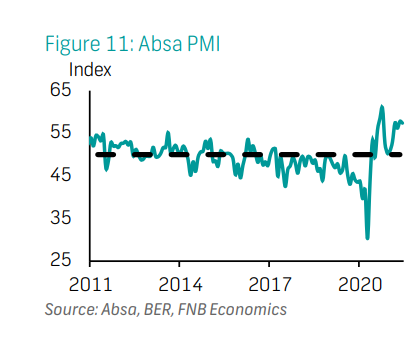