Wall Street wobbled on Wednesday as investors remained on edge about the impact of soaring inflation and the prospect of the Federal Reserve (Fed) getting even more hawkish. Reuters quoted Fed Chair Jerome Powell saying, “the central bank would not hesitate to keep raising interest rates until inflation returns to the 2% target, even if it means moving past broadly understood neutral levels.” Powell’s comments also had a bearing on gold prices, with spot gold trading at $1 818.19/oz at 20h00. Growth stocks further weighed on market sentiment, with Microsoft (NASDAQ: MSFT ), Apple (NASDAQ: AAPL ), Nvidia, Tesla (NASDAQ: TSLA ), and Amazon (NASDAQ: AMZN ) down between 3.50% and 5.80%.

Persistent concerns about rising price pressures and monetary policy tightening prompted a decline in European markets on Wednesday, with the regional STOXX 600 and the DAX 30 index dropping around 1% each, led by technology and consumer stock declines. “Central bankers have been switching to a more hawkish tone given the worsening outlook for inflation and growing concerns about its impact on the growth momentum,” Trading Economics noted. On the economic front, the annual inflation rate in the UK reached 9% in April 2022, the highest level since 1982, while consumer prices in the Eurozone remained at 7.50%.

The Shanghai Composite fell by 0.25% to close at 3 086 points, while the Shenzhen Component lost 0.20% on Wednesday, amid a lack of fresh catalysts to boost stocks. Hong Kong stocks extended their four-day winning streak boosted by stellar performances by industrials. The local bourse closed about 0.90% lower at 69 083 points on Wednesday, anchored by tech stocks and commodity-linked sectors. Moreover, uncertainties about China's economic recovery and power supply cuts in South Africa weighed on market sentiment. On the economic front, Trading Economics reported that retail sales volumes rose by 1.30% y/y in March 2022, compared with a 0.90% decline in the previous month and above market estimates of a 1.50% increase. The rand breached R16.00 to the dollar at the close of business, while economists continued to bet that the local central bank will announce a 50-basis point interest rate hike this week, taking it to 4.75%.

Brent crude fell to below $110 per barrel as market participants mulled over subdued economic growth prospects and expectations Venezuela could export more oil against hopes of easing supply constraints in China. Trading Economics added that “China appears to be gradually easing its lockdown of Shanghai, with the city set for the return of more normal life from 1 June 2022. Also, Russia’s production fell by nearly 9% in April, 1.28 million bpd below its OPEC+ designated output quota as producers have started to shut in some wells as buyers in the West are increasingly shunning Russian crude amid the Ukraine war.” 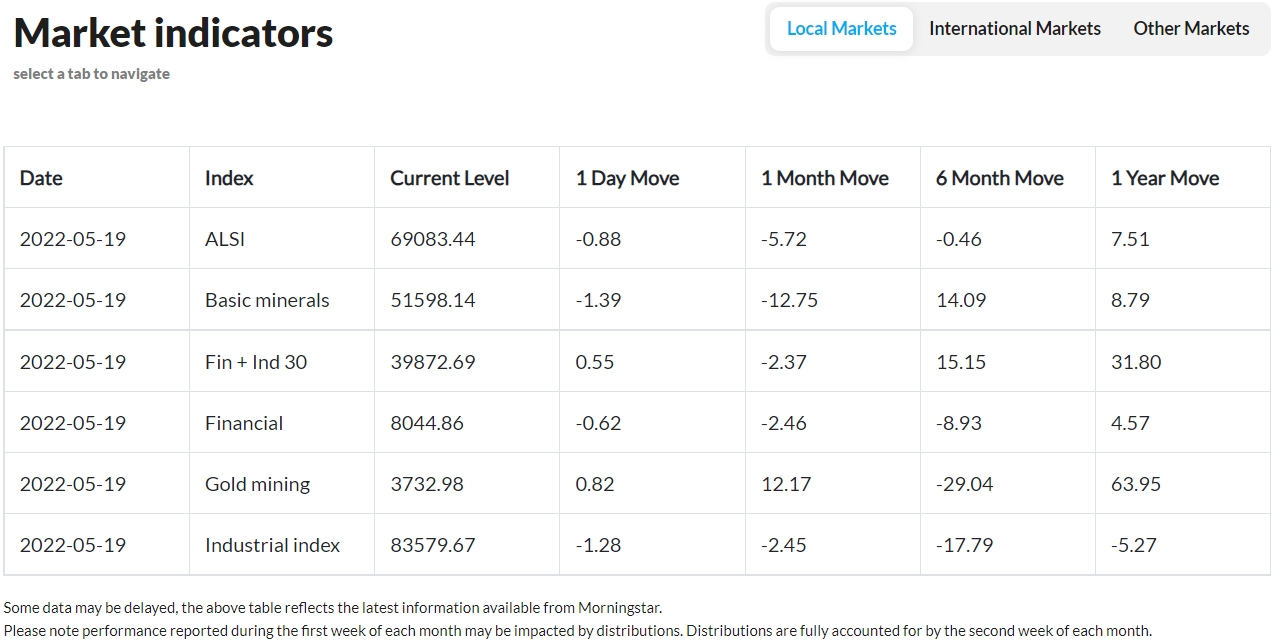