Investors left no doubt in anyone’s mind that they like bonds from the European Union as they ordered €142 billion of the first bonds in the pandemic recovery program, prompting the banks managing the deal to double the issue to €20 billion and pushing down the yield to 0.086% from the 0.1% originally envisaged.

The EU will follow up with two more syndicated issues this summer as it plans to raise €80 billion more this year. The total program calls for up to €800 billion of bond issues through 2026.

The inaugural issue was marred by a kerfuffle over banning some of the world’s major banks from the syndicate because—horrors—they had in the past been involved in market-rigging scandals. Find a bank that hasn’t been embroiled in some underhanded activity at one time or another.

Critics quickly branded the unprecedented measure as protectionism (in one case modified by the word “petty”). Five of the 10 banks were American or British.

Meanwhile, the U.S. Treasury market got a shock when the Federal Reserve unexpectedly shifted its consensus on when it might start raising rates. Thirteen of the 18 policymakers on the Federal Open Market Committee now think the Fed will have raised rates by the end of 2023, with seven looking for hikes in 2022, after the central bank had maintained for months it wouldn’t raise them before 2024.

The yield on the benchmark 10-year Treasury note spiked on the news last Wednesday, to nearly 1.6% before receding to trade a tick under 1.5% on Monday. 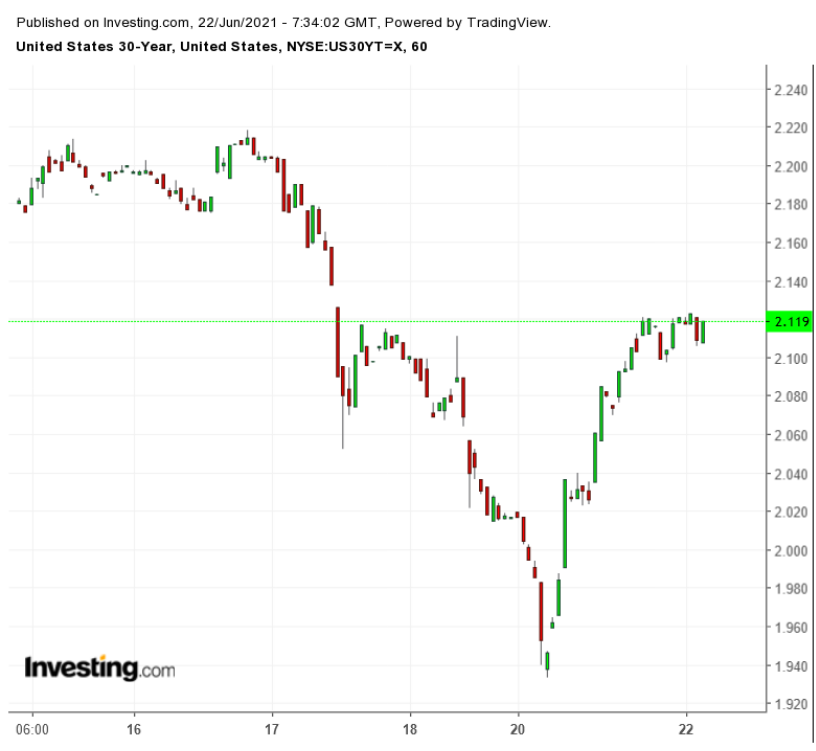 The 30-year bond yield, however, declined to nearly 2.01% by Friday, from its pre-announcement level of more than 2.2%, recovering to about 2.11% Monday. The five-year note showed the biggest yield increase, spiking to nearly 0.96% before going back down to about 0.88%, compared with about 0.78% prior to the release of the projections.

The flattening of the yield curve came as the projections of policymakers showed inflation calming down after what officials say will be a transitory increase.

How accurate these forecasts will prove to be is uncertain, after FOMC members have steadily increased their quarterly projections of inflation and growth since the arrival of vaccines heralded the economic rebound, and they keep moving up their timetable for rate increases.

Fed policymakers are keeping their bond purchases steady at $80 billion Treasuries and $40 billion mortgage securities a month, but Fed Chairman Jerome Powell said the FOMC will be discussing how and when to reduce them at “future meetings.”