It seems like much more than just 11 days ago that St. Louis Fed President James Bullard said the US central bank needed to bump up its short-term interest rate to 1% by July 1. Bullard was responding to rapidly rising inflation which was running hot at over 7% YoY, the highest in decades.

After his remarks, stocks swooned. The S&P 500 Index slumped 4% over the next three days.

Nearly three weeks later, though one still hears inflation warnings what with US CPI at 0.6% on a monthly basis, the bigger question now is how much havoc will Russia's invasion of Ukraine wreak on markets and the global economy?

Short answer: Plenty. With more than abundant volatility ahead.

The two stressors—each a major concern in its own right—resulted in serious declines during the month of February for many global markets. For US indices, the S&P 500 finished the month down 3.1%. The Dow Jones Industrial Average dropped 3.5%, and the NASDAQ Composite Index slid 3.4%. The three indexes also suffered their second monthly losses in a row.

Stocks were lower for the month in Japan , Germany , France , the United Kingdom , India and Hong Kong as well.

Indeed, stocks have been struggling for the past few months, since at least the start of 2022 if not longer. The NASDAQ 100 hasn't hit a 52-week high since Nov. 22, 2021, but the index's declines have been modest, despite everything.

Still, as March begins, it's the Russian war in Ukraine that's front and center. While officials from both countries met Monday near the Belarusian border, and have agreed to meet again though no accord was reached. As of the time of writing, the fighting has only grown fiercer.

The Russian invasion has been heavily criticized around the world and an array of sanctions has been imposed on Moscow and its enablers. Markets were punishing Russian aggression as well. 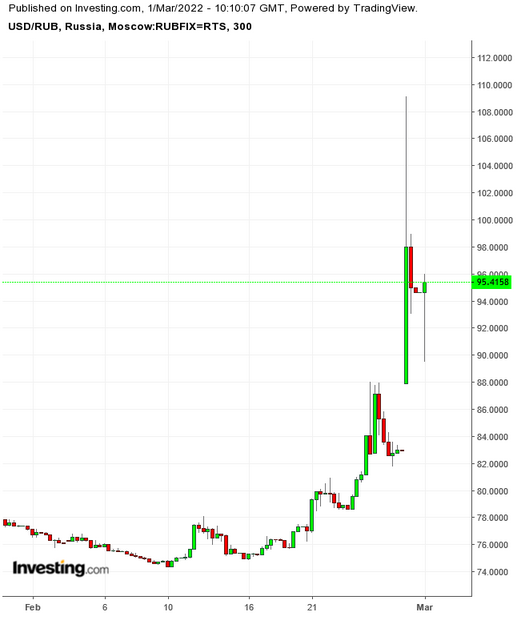 The US dollar jumped as much as 32% against the Russian ruble on Monday.

The Russian Stock Exchange was off 34% for the year through Friday and didn't trade at all on Monday, Feb. 28; stock and derivative trading in Moscow remains closed on Tuesday, Mar. 1 as well. In addition, trading was halted on a number of stocks whose businesses operate mostly in Russia but went public in the United States, including Russia's largest internet company, Yandex (NASDAQ: YNDX ), and internet retail platform Ozon Holdings (NASDAQ: OZON ).

However, crude oil continued its near non-stop rally since bottoming in the spring of 2020. It has been hovering at or near $100 a barrel for the first time since 2014. Goldman Sachs believes crude prices will hit $115 in a month.

Retail gasoline prices are up about 22% in the United States and look set to approach $4 a gallon (overall) for the first time since the summer of 2008.

Since the invasion, Western countries have imposed ever stricter sanctions on Russia. These include refusing to let Russian planes cross their air space, precluding dollar transactions by the Russian Central Bank, and freezing Russian foreign reserves; yet another measure that freezes dollar assets held by Russian President Vladimir Putin and many of his key oligarch allies. 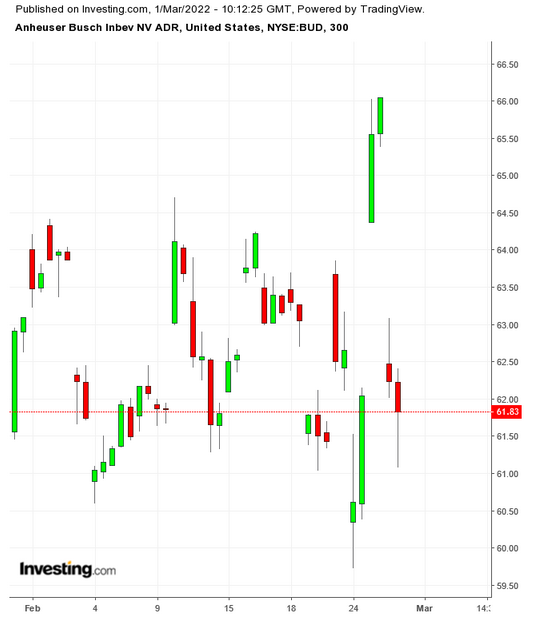 The beer and beverage giant dropped 2% during the month of February, but 3.8% over the final two weeks. It has a 14% market share in the Russian beer market.

On the other hand, the situation in Europe benefitted defense stocks. Lockheed Martin (NYSE: LMT ) jumped 11.4% while Northrop Grumman (NYSE: NOC ) added 19.5% for the month.

It's already clear the Ukraine invasion will be contributing to higher food prices. Wheat futures in Chicago jumped 8.6% to $8.34 a bushel on Monday, the biggest one-day gain for the commodity in a decade. 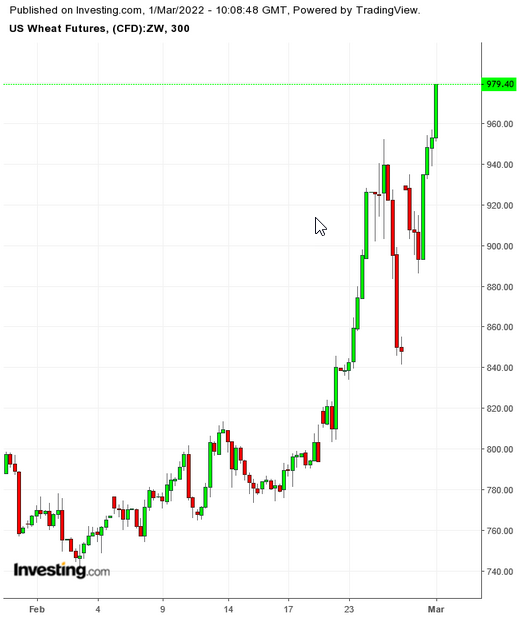 Wheat was up 22.7% for the month. Ukraine is a major grain exporting region, and Russia's invasion has disrupted shipping activities at Ukraine's Black Sea ports.

It is anyone's guess, frankly, as to when the conflict will end and how long it will take to mend the Ukrainian economy—assuming Ukraine succeeds in driving Russia out of its territory and remaining independent.

So, Ukraine and inflation will be joined at the hip, causing no end of concern probably for months. Let's hope the situation doesn't drag other countries into the conflict.

Much easier to deal with is central banks leaving rates at near-zero levels for a year too long (at least). That of course brings us to the Federal Reserve and two important events in March.

First, Wednesday's Semiannual Congressional Testimony by Fed Chairman Jerome Powell on economic and monetary policy to the House Committee on Financial Services. You can bet everyone will focus on Russia and how the Fed will deal with inflation. Powell repeats his testimony Thursday before the Senate Banking Committee.

The more important occurrence is what the members of the Fed's Federal Open Market Committee decides on interest rates at their Mar. 15-16 meeting. Expectations are that the Fed will raise the target for its key federal funds rate a quarter of a percentage point. (It is now 0% to 0.25%.) The Fed's goal, as Powell noted in January is to reduce the worst US inflation in 40 years.

That effort could take at least a year, maybe longer, to work, but the tool is clumsy. Rate hikes applied to everyone don't take into account individual economic circumstances. The risk then is, if it takes too long to rein in inflation, it may set off a recession.

Not all stocks performed poorly in February. But it's evident stocks have struggled since the end of 2021 and in early January.

Only nine of the 30 mega cap stocks listed on the Dow are ahead for the month, led by oil major Chevron (NYSE: CVX ). 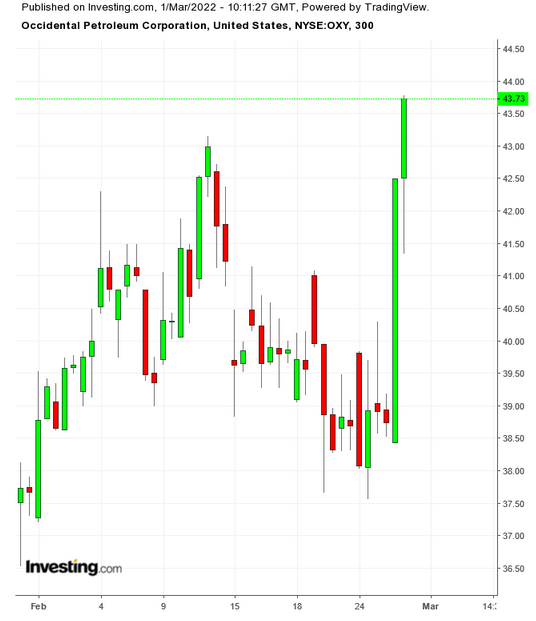 There was also some strength in financial stocks as well as travel and industrial shares.

The weakest sector in February was communications services, which includes Disney (NYSE: DIS ), Live Nation Entertainment (NYSE: LYV ), Netflix (NASDAQ: NFLX ) and Meta Platforms, Facebook's parent (NASDAQ: FB ). Meta Platforms fell nearly 33% for the month. And because its market capitalization is so huge (currently at $574.4 billion), it could easily drag the NDX down.

The five weakest S&P 500 stocks for the month were:

In addition to Chevron, which was up 9.7% in February, the top Dow stocks were: