The current account surplus widened to a record R343 billion

The current account, seasonally adjusted and annualised, recorded a record surplus of R343 billion in 2Q21, up from R261 billion in 1Q21. As a percent of GDP , the current account now stands at 5.6%, from 4.3% previously (revised down from 5.0% with the revision to GDP).

The services, income and current transfer account (SIT) recorded a deficit of R271 billion, from a R190 billion deficit previously, which translates into -4.4% of GDP (from -3.2% in the first quarter). This is explained by a large shortfall in the primary income of R169 billion (-R63 billion previously), services recorded a lower shortfall of R66 billion (from-R72 billion), and current transfers recorded -R36 billion (from -R55 billion).

We expect the current account to average 1.9% as a percent of GDP in 2021, with upside risk from today’s outcome, but we are concerned about how the shortfall in primary income will evolve. 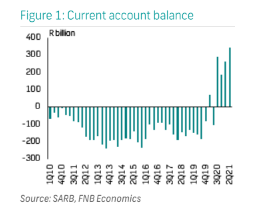 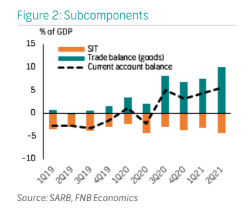 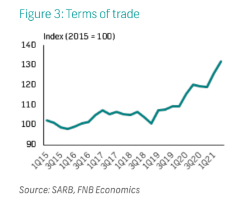