Retail sales volumes kicked off 3Q21 on a negative note, declining by 0.8% y/y in July, from the lockdown-induced increase of 10.5 y/y in June 2021. Worryingly, the month-on-month seasonally adjusted retail sales, which is a more meaningful measure under the circumstances and aligns with the official GDP calculation, decreased by 11.2% in July compared with June. This followed month-on-month increases of 0.7% (revised from 0.6%) in June and 2.3% in May. Excluding the lockdown-induced decline of 49% m/m in April 2020, July 2021 represents the largest monthly decline in the history of the current retail sales time series (since January 2002). The third wave of Covid-19 infections, the implementation of stricter lockdown regulations between 28 June and 25 July – during which social gatherings and consumer mobility was restricted and liquor sales banned – combined with the riots in KwaZulu-Natal and some parts of Gauteng weighed on retail sales in July.

Once again, Household furniture and Hardware material retailers, which led the rebound in retail sales in 2H20 and into 1Q21, were the worst performers in July, declining by 10.2% and 6.2% y/y respectively. This indicates that the home-improvement drive, which was driven by the greater adoption of working from home due to the pandemic, may be slowing. We note, however, a divergence between hardware material volume sales, and sentiment indicators. Despite the recent decline in volume sales, the FNB/BER Building Confidence Index shows that sentiment among Hardware Retailers improved further in 3Q21, to reach the highest level since 2007. Elsewhere, mortgage demand indicators suggest that home-buying activity may also be slowing (in volume terms), and thus offering less support to demand for new furniture. The impact of liquor sales bans was evident, with volumes attributed to Food, beverages and tobacco products retailers declining by 4,1% y/y in July. On the opposite end of the spectrum, the uptrend in Clothing and Footwear volumes continued, with 10.9% y/y growth. Pharmaceuticals also increased, 1.5% y/y, in line with the flu season and rising Covid-19 infections in July. 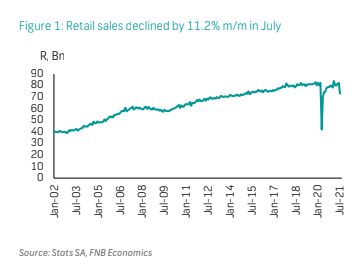 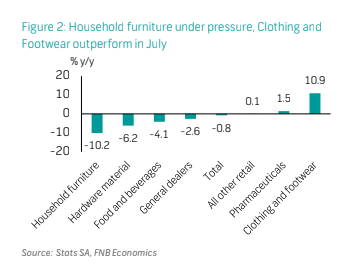 Outlook
The near-term retail sales should depict diminishing base effects, due to last year’s harsher lockdown restrictions. Internal card spend data shows a swift recovery in consumer spending following the riots in KZN and some parts of Gauteng. As such, while the broader economic ramifications may linger, the recent riots likely had a fleeting effect on overall retail sales volumes. Going forward, the reinstatement of the Social Relief of Distress (SRD) grants to vulnerable households and the Temporary Employer/Employee Relief Scheme (TERS) to workers affected by the lockdowns and riots, combined with some improvement in consumption credit uptake (credit cards and general loans), should be supportive of retail sales volumes. However, these must be weighed against the still depressed consumer sentiment and the slow readjustments in the labour market.