Diversified miner Glencore (JO: GLNJ ) reported good 1H22 results (for the six months ended 30 June 2022) on 4 August. Adjusted 1H22 core profit soared 119% YoY to US$18.9bn (c. R316.3bn). Russia’s war on Ukraine has prompted unprecedented volatility in commodity prices, with records set for coal and aluminium in 2022. Glencore’s coal production was up 14% YoY in 1H21 to 55mn tonnes, primarily reflecting higher production from the newly acquired stake in Cerrejón. However, Glencore (LON: GLEN ) did warn that 2H22 production could be negatively impacted by flooding and a resurgence in COVID-19 cases in Australia, where it owns several coal mines. The full-year production guidance was for c. 121mn tonnes of coal. Thermal coal now accounts for 9% of total Group revenue vs only 3.4% in 1H21.

The company’s industrial adjusted core profit surged more than US$8.4bn (of which US$8bn was attributable to coal) to US$15bn for the first half, benefiting primarily from record coal prices. Earnings rose nearly four times and the dividend by almost three times. Glencore also announced plans for a special dividend of US$0.11/share and a US$3bn share buyback.

However, free cash flow (FCF) badly lagged earnings because of a US$9bn working capital build in 1H22. Glencore said that US$5bn of this went into its trading (a.k.a. marketing) business due to the higher volatility we have seen in financial markets this year. Coal, the trading business, and copper accounted for most (86%) of its adjusted EBITDA. Coal alone was nearly half of the total.

Figure 1: Glencore overview and forecasts, In US$bn except per share 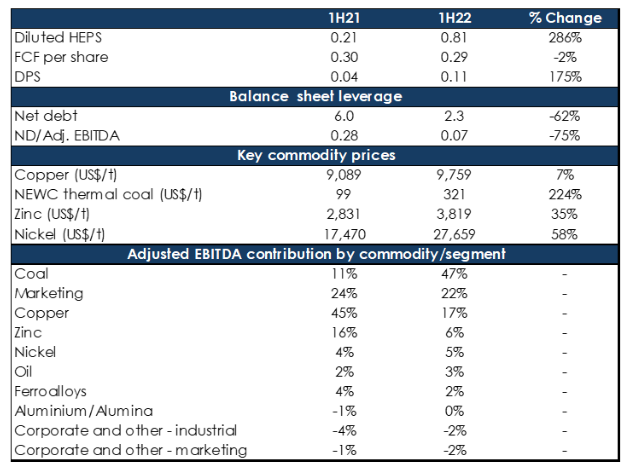 Glencore said that it estimates its spot FCF to be US$18bn. Its market cap is currently US$79bn, implying a c. 4x FCF multiple. We expect valuation multiples to be low at this point in the cycle. 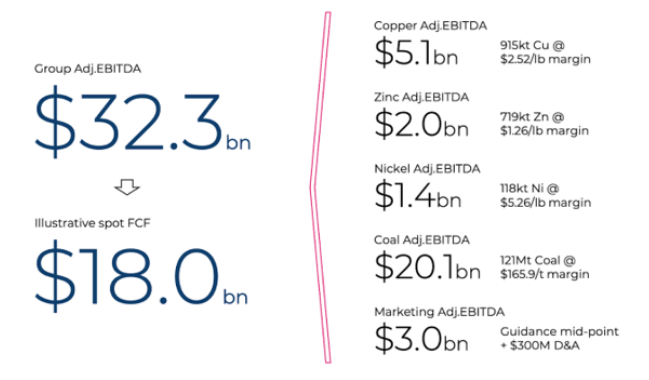 We are buyers of Glencore. We believe that the Group is uniquely positioned to take advantage of the current strong thermal coal prices and the volatility we are seeing in commodities markets. Glencore is currently trading at c. 3.5x-4.0x this year’s earnings and FCF. We do not expect much of a re-rating higher from a valuation perspective. Still, we remain buyers due to continued earnings growth momentum (coal prices are substantially higher so far in the second half of this year vs 1H22).