Wobbling all the way...but the Rand makes it to the end of the week with minimal damage!

In a week of uncertainty, you would have to say that the local unit perhaps got off lightly to end where it began, considering how choppy the last few weeks have been.

But there we were, back around the R16/$ level to end the week.

Let's reverse though, and take a look at all the transpired in the 5 days, and then look for some clues to the future.

Before we get into the week, here were the biggest headlines from the 5 days:

To start with the opening hours of the week for the Rand, we saw the local unit just a touch over R16.10 to the Dollar, still close to it's worst levels of 2021.

The ZAR really did seem at the mercy of global developments, and with President Ramaphosa announcing the country would remain on lockdown level 1 in yesterday’s “family meeting”, the week ahead had the potential to be very volatile.

After all the one way traffic over the previous weeks, it would be expected that the Rand would see some kind of a comeback. But how big would it be, and how long will it last?

Other markets were taking strain too, and continued to do so through the week.

Oil has taken a massive hit over the latest developments in the potential lockdown chances increasing, and it is still fresh in everyone's minds what happened last year.

When Oil fell from a fairly rosy position to sub $0!

All that came from lockdown fears and what the days ahead held now we have seen a full circle of oil returning back up to levels not seen since 2014.

But now it looks like the tide is turning.

Stock markets have also taken a massive hit, with some big selloffs to end November in the red, and the same trend continuing into December so far.

The Down now traded at 34300 on Friday afternoon, and SP500 was threatening to break beneath 4500. While still at record levels, investors are wary that markets that have flown higher over the past year or two, have the potential to reverse that trend just as fast.

So we live in uncertain times, certainly in every financial market!

But getting back to the Rand, we saw the local unit make some minor recovery to rally sub R15.80 through the first half of the week: 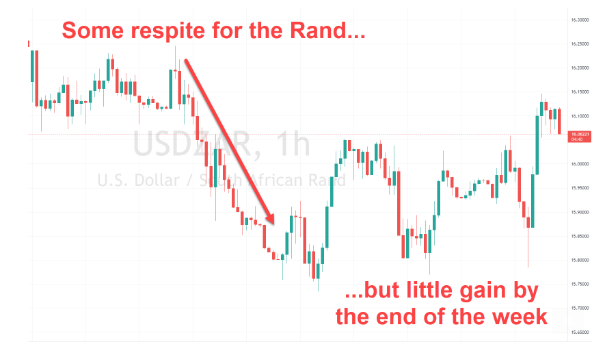 At this stage, the local unit would take any respite it could get!

To make matters worse, when prices were hiked 81c this last week, it turned out that there was a miscalculation and it should only have been 75c. While only a small percentage, motorists were left fuming! And on top of this, a warning from Mantashe is that if E-Tolls are scrapped, prices for fuel will go even higher…

The chart for fuel prices over the last 12 months makes for just shocking reading: 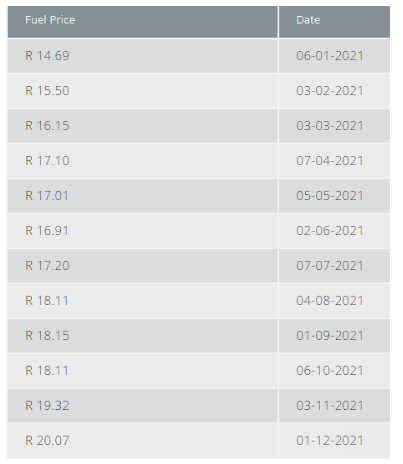 What next for the power company? The expectation was for a plan before the end of the year to separate into the separate segments, but now Pravin Gordhan is just saying "soon"…but will it be too late with this kind of chaos ongoing?

Just to get back to the Rand, the rally didn't continue for the latter half of the week, as we saw it push back over R16 on Friday, on the back of the Jobs report out of the US.

The report was not a good one, yet it triggered a stronger Dollar which chose to focus on the lower unemployment rate - rather than the major miss on jobs added.

As we neared the US close for the day, the ZAR basically traded where it had began, just a touch under R16.10.

And as we look to the week ahead, the markets would seem to once again be at the absolute mercy of the global uncertainty that is around.

However, as this last week showed, sometimes that movement in the markets is not exactly according to what you would expect - when markets end up reacting totally the opposite to the news, according to logical rationale.

So we are looking at events, but just in the way of triggers.

Here are the ones we have our eyes on this next week:

Once again, we will be watching some key levels to confirm our most probable outlook for the days and weeks going into yearend.