I posed this question a couple of weeks back and am asking it again as the Big Day is here: Has the drop in gold been proportionate to the speculation over Jackson Hole and could it fall further?

No one, except possibly Jerome Powell himself, knows what the Federal Reserve Chairman will announce today with regards to the central bank’s plan over its monthly stimulus spending of $120 billion. 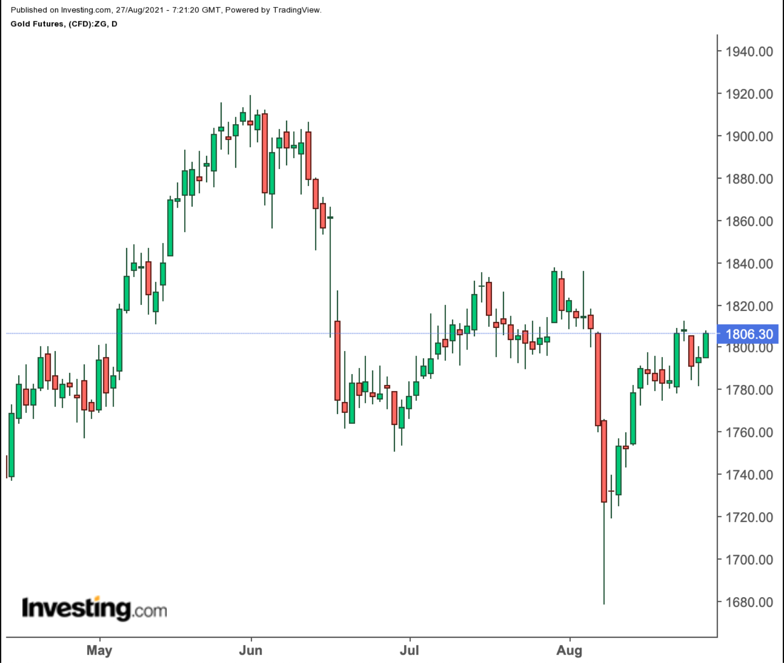 While many might agree that those asset purchases practically saved the nation from financial collapse in the early days of the pandemic, a growing number are saying now the Fed is virtually strangling the same economy it once saved, via inflation.

The Fed’s stimulus program is being blamed for fueling inflation in the United States, where economic growth for the second quarter of 2021 was estimated at 6.6% on Thursday—way above the 3.5% decline noted for all of 2020. The Fed itself has projected economic growth at 6.5% for all of 2021.

Aside from the central bank’s asset purchases, the Biden administration has managed to pass more than $1 trillion in COVID-related spending since the president took office in January. Democrat lawmakers aligned to Biden this week advanced a further spending plan for $3.5 trillion to advance his economic agenda.

The Fed has an annual inflation target of 2%. But the US Consumer Price Index , a broadly-watched inflation gauge, grew by 5.4% over a one-year period in June.

More importantly, the Fed’s preferred inflation gauge, the core Personal Consumption Expenditure Index, expanded by 3.5% in the year to June—its most in 30 years.

At least three senior Fed officials—Dallas’ Robert Kaplan , St. Louis’ James Bullard and Kansas City’s Esther George—spoke forcefully on Thursday on the need for a taper of the stimulus, adding pressure on Powell hours before he takes the rostrum at the annual Jackson Hole summit.

The event, which normally takes place in Jackson Hole, Wyoming, but is being held virtually for the second straight year due to the coronavirus pandemic, has been often used by Fed policymakers in the past to provide guidance on their future policy. It will be live-streamed as a Kansas City Fed's central banking conference.

At The Least, A Groundwork For Fed Taper Is Expected

Many investors appeared to think Powell will strike a more dovish tone in his 10:00 AM ET (1400 GMT) speech, according to a Reuters preview that quoted Fiera Capital portfolio manager Candice Bangsund as saying:

"While Chair Powell is likely to ... lay the groundwork for an eventual taper, we expect him to err on the side of caution and patience this week given that the macroeconomic landscape has deteriorated since the July policy gathering," Candice Bangsund, portfolio manager at Fiera Capital in Montreal, Canada.

Rough consensus in the market is that Powell will likely announce tapering in the fourth quarter, giving a clear signal at one meeting before the actual announcement.

"For Powell, there is no merit in specifying the exact timing for tapering at today's speech. If he doesn't drop a clear hint, that will be mildly positive for stocks."

On the forex front, the Dollar Index and risk-sensitive currencies are expected to surge in the event of a taper, while the yen is likely to weaken in that case, he added.

The big question, at least for those who clicked on this story is, where does that leave gold?

As precious metals strategist David Song noted in a blog posted on the Daily FX site on Thursday, gold has pushed above the 50-Day SMA, or Simple Moving Average, of $1790, “but lack(s) momentum to hold above the moving average”.

Such an outcome might undermine gold’s recent recovery as the indicator develops a negative slope, Song wrote, adding:

“The recent recovery in the price of gold appears to have stalled ahead of the monthly high ($1832) as it struggles to retain the advance from the start of the week.”

“As a result, a shift in the Fed’s forward guidance may undermine the recovery in bullion, and lack of momentum to hold above the 50-Day SMA ($1790) would cause a bearish outlook for the price of gold as a ‘death cross’ takes shape in August.”

Separately, Rekha Chauhan, another gold blogger, wrote on the FX Street that from a technical perspective, gold was challenging the 21-DMA, or Daily Moving Average, of $1785 once again.

“A daily closing below the latter could confirm a bearish reversal following a rejection at the 200-DMA at $1810 earlier this week.”

“The next stop for the bears is seen at the one-week lows, below which the Aug. 16 low of $1771 could come into play. Alternatively, recapturing 50-DMA at $1791 on a sustained basis is critical to attempting a meaningful recovery towards the $1800 level.”

"We suspect that this will repel the advance at least on the initial test and provoke some further consolidation.”

“We would allow for a pullback towards $1750, the June 29 low and allow for an attempt at stabilization there. Near-term risks are on the downside but longer-term to fairly neutral/side lined.”

So, how much more can gold fall from here?

Back to near mid-$1,600 levels is likely, says Song, explaining: