Our last two weekly missives have highlighted gold's being technically "high" near-term, (yet fundamentally undervalued -- understatement -- in the broadest sense). And as the above panel shows, gold remains higher than where 'twas at this time a year ago (1236), settling out the week yesterday (Friday) at 1286 for a year-to-date gain of 11.6%.

One might consider such gain consider as "impressive", given the stock market per the S&P 500 being but +4.9% so far this year; and anything but "impressive" is the corresponding year-to-date practically non-leveraged gain by the gold miners as measured per the their exchange-traded fund GDX (NYSE: GDX ), +12.9%.

Then consider this is our 10th weekly missive since that from the week ending 12 July 2013 -- almost four years ago -- for which gold has settled in the 1280s, and price's vicissitudes aside, we ain't gone nowhere rather than being way up there. C'est ça, mon frère, (the French election in the air).

Speaking of "nowhere", for the first time in our memory, a pro-gold investment bank colleague made not a single mention of the yellow metal this past week during a quarterly conference call to clients, which we then followed with an e-mail stating that gold is "firm and stuck". Which leads us to the following tri-panel graphic of the last 21 trading days (one month) for the metals.

To wit, over the past two weeks, gold's "Baby Blues" (left) stubbornly have refused to lose, whilst those for Sister Silver (center) are swiftly slipping, her being adorned in her industrial metal jacket (as opposed to her precious metal pinstripes) obviously in sympathy with skidding Cousin Copper (right):

Again, those blue dots measure the day-to-day consistency of a market's 21-day linear regression trend, (the grey diagonal line in each of the above panels). And with gold quite fragilely sitting atop its 1240-1280 resistance zone, should price not quickly get off the schneid and move to the upside, those Baby Blues will finally crack, and back into said resistance zone shall price be shown. Here 'tis between the purple lines across this year-over-year view of gold's weekly bars: 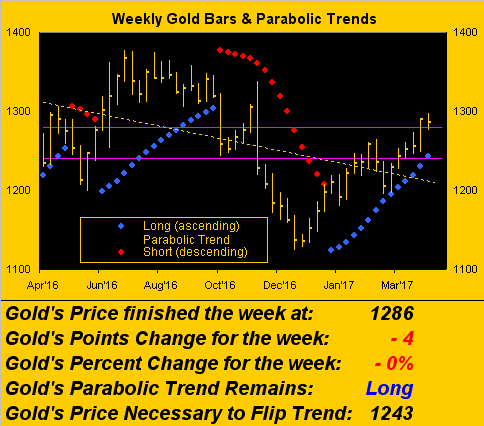 Thus gold's levitating through here can be attributed to the usual suspects of the unknown: the fallout of the aforementioned French election, the hardening geo-political stance of the U.S. and its domestic agenda, and what the Federal Open Market Committee may -- or may not -- vote to do come 03 May.

With respect to the latter, the FedFunds futures these last two weeks have tilted away from an FOMC nicking up its rate at this next meeting. To be sure, March's inflation measures came in benign at the wholesale level, and actually deflationary at the retail level. But you'd never know it at the grocery store. In purchasing a fake crab cake upon which to dine last evening, rather than paying the usual $1.99, the butcher ramped the price up to $2.69. Our balking at such 30% increase in a reportedly 2% inflation world didn't go very far: "We gotta get it from your wallet, bello." Terrifique. Pass the tartar sauce.

As well, a look at the Economic Barometer, should it fail to get some near-term grip, could see the Fed a rate hike skip. For in addition to March's non-inflationary data as well as slippage in retail sales, this past week brought in slowing April growth readings for both the New York Empire and Philly Fed Indices , and in the National Association of Home Builders' data. Moreover, following Q4 GDP growth of 2.1%, next Friday's initial GDP report for Q1 is expected to be half that at 1.1%. Either way, here's the Econ Baro:

The Baro's dip notwithstanding, this past week in Washington during the spring gatherings of the World Bank and IMF, the latter announced a ramping up its global economic growth outlook, albeit they're banking to some extent on StateSide tax reform, as well with a cautious eye that protectionism doesn't muck it all up. And across the pond, the trusted IHS Markit's Flash Composite Purchasing Managers index reading for the EuroZone moved further up to 56.7, its best level since April 2011, supported by robust business ordering. The on to China, its estimate-beating 6.9% Q1 growth included increases in spending on infrastructure, retail sales , housing and exports. And such that it doesn't all spoil, year-to-date the dollar has come off the boil.

Still, this brief aside for stocks: we're about 10% through Q1 Earnings Season; early as it may be, per the website's earnings page we show 70% of reporting companies having bettered their Q1 of a year ago. That is on pace to be the best quarterly improvement we have in our records going back to 2005. But as we are always compelled to point out, given our "live" reading of the S&P 500's price/earnings ratio presently at 34.1x, to return to historically-accepted proper stock market valuation means either a doubling of earnings, or a halving of stock prices, (or in between, rising earnings within a falling stock market -- good luck with that). Meanwhile, has gold duly doubled from its present price? Not yet.

As we next go to the 10-day Market Profiles for the precious metals, here is a picture that rarely is seen: the price of gold on the left (1286) is near the top of its profile ... but out of sync as we earlier saw, the price of silver on the right (17.90) is near the bottom of its profile. And for those of you out there lucky enough to be scoring at home, the median gold/silver ratio millennium-to-date is 62.8x, but 'tis presently 71.8x, (hint hint, nudge nudge, elbow elbow): 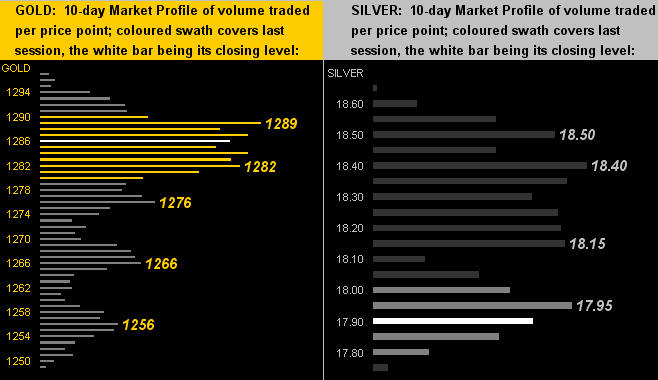 We'll leave you for this week with these three quick hits:

■ The iconic personal finance firm NerdWallet has determined by survey that more than half of all StateSiders primarily save for their retirement with an actual "savings account", (the inference being as opposed to a "401k"). Now whether (per 2013 Fed data) you use the median savings account balance of $5,200, or even the far more skewed weighted average savings account balance of $33,766, 'tis pretty much peanuts, (ex-social security). Have we mentioned that gold is trading at but half its dollar -debased value, (not even accounting for overshoot?)

■ But where to store one's gold, eh? Try a piano: Shropshire, England's Graham and Meg Hemmings just donated one to Bishop’s Castle Community College, both parties unknowing that inside of the instrument was stashed some 913 gold coins (about $600,000 worth) -- until the piano tuner showed up at the college. Talk about tweaking the ring of one's "kaaa-Ching!" ... Stick that in yer B-flat.

■ Finally, go grab your pilot's license and some $1.5 million so you can pre-order (likely this year) AeroMobil's just-unveiled new car ... which also sprouts wings to fly in excess of 400 miles at some 100 miles per hour. Whilst it may not qualify as "The only way to fly!", it might be just the thing for hopping over those annoying toll booths along the autoroutes. And how 'bout that gold paint job!