Following a peak of around 5.0% y/y in April, house price growth has been slowing and the FNB House Price Index growth has decelerated to 3.0% y/y in October (3.2% in September). The slowing pace of price growth is consistent with the waning interest rate induced demand and a lagged recovery in labour markets. In fact, our market strength indicators show a widening demand gap: the demand index has started signaling a marginal decline in the year-on-year growth, while the supply index continues to recover (Figure 1). 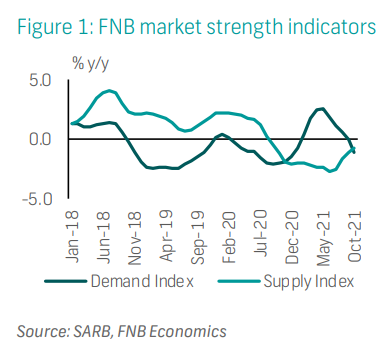 Slowing demand reflects the slowdown in volume transactions by first-time buyers who were switching from renting to homeownership. Disaggregating market volumes by age group clearly shows that buying activity is migrating away from younger buyers (<35 years old), towards middle-aged buyers (35-55 years old) and, to a lesser extent, older age groups (+55 years old) (Figure 2). The <35 years age group forms the core of total rental demand and improved demand for rentals is reflected in the slowing (but still elevated) flat vacancy rates, accompanied by a marginal rental price reflation in the last few months). 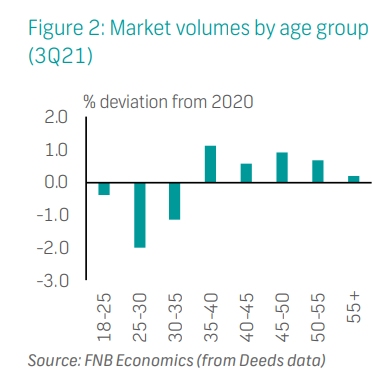 The recovery in the supply of houses for sale is supported by a recovery in sellers’ confidence, buoyed by better than expected buying activity in the past 18 months. There are also early indications that sales due to emigration are starting to increase in affluent segments, alongside easing global travel restrictions. However, these remain much lower compared to 2019 levels.

Despite slowing volume growth, the value of mortgage extensions continues to trend higher, averaging 7.4% in September, the highest nominal growth since May 2009. In our view, this indicates a shift in demand, away from lower value towards higher value (bigger) properties. Indeed, the average mortgage size has risen by approximately 10% since 4Q19 in real terms (i.e., controlling for average house price growth) (Figure 3). 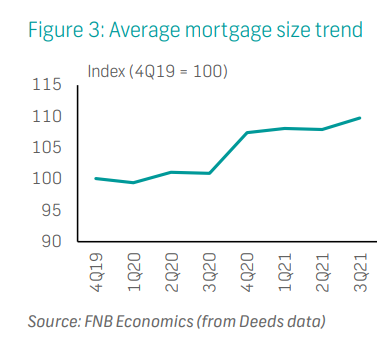 Loan-to-price ratios (LTPs), which measure the proportion of the purchase price that lenders are willing to fund, climbed throughout the pandemic, to the highest levels since 2008. However, recent data now shows a reversal of that trend, with average LTP falling to 92.1% in 3Q21, from a peak of 93.1% in 4Q20. This is consistent with the changes in the composition of buyers, away from younger buyers (<35 years old), towards older age groups, as explained above. These buyers tend to have stronger balance sheets (equity) and access to savings to fund upfront deposits, and therefore a lower reliance on credit to fund their purchases. Nevertheless, the LTPs remain above the post-global financial crisis average of 89.9%, suggesting relative risk appetite by lenders.

While these remain broadly supportive of the housing market, we are concerned about the slow recovery in the job market. This, combined with rising interest rates, suggests a less supportive medium-term environment for home buying activity. However, if sustained, the ongoing shifts in housing needs – which has lent support to homeownership – could mitigate this impact. For next year, we expect house prices to drift lower to around 3%, compared to 4.2% year-to-date.

A new variant, B.1.1529, has been identified in South Africa. The variant is seemingly circulating at a low frequency but has an alarming number of mutations. The National Institute for Communicable Diseases has so far recorded 22 positive cases of the variant, and more cases are being confirmed as testing continues. Experts are yet to conclude whether the new variant has implications on the efficacy of existing vaccines but emphasised that limiting the spread still requires people acquiring the vaccine as well as non-pharmaceutical interventions such as wearing of masks, sanitising and social distancing. Cases have continued rising with Gauteng accounting for 79% of new cases. As of 25 November, 2 465 new Covid-19 cases have been reported locally, reflecting a positivity rate of 6.5%. The seven-day moving average of local infections stood at 1 040, reflecting a 188.89% w/w increase. 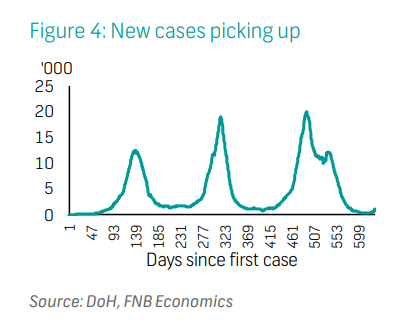 According to the Department of Health, 16.42 million people have been vaccinated, representing 41.25% of the adult South African population. Despite efforts by government to improve vaccine access and uptake through initiatives like Vooma, the momentum of vaccinations remains lacklustre and has not come close to its peak of 0.4 vaccines administered per 100 people on 29 August. After recently improving to 0.19 per 100 people on 15 November, the momentum has slowed further to 0.16 per 100 people on 24 November.

The leading indicator decreased by 2.3% m/m in September, after increasing by 0.7% in August, resuming declines of 2.5% in July and 4.4% in June. On an annual basis the leading indicator was up 9.3%, from 14.9% in August, as base effects from 2020 continued to wane. Most sub-indices (nearly 80%) decreased in September, led by a fall in the index of export commodity prices and the number of residential building plans passed. The improvement was in average hours worked by factory workers and the volume of orders in manufacturing. 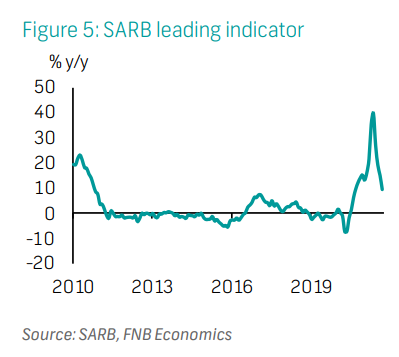 Business confidence remained below the neutral mark in 4Q21 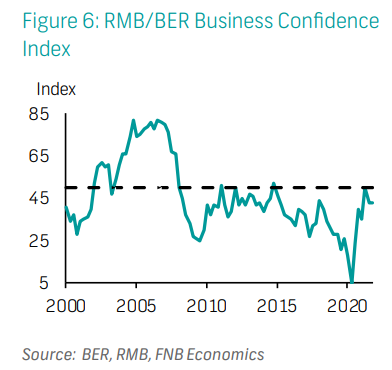 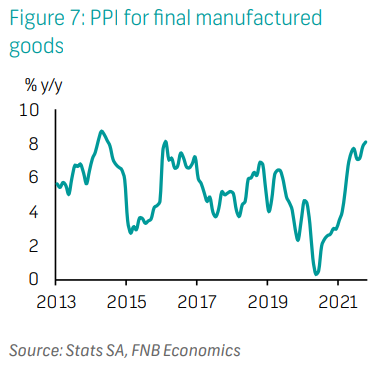 Data on private sector credit extension for October will be published on Monday. Private sector credit extension showed further improvement in September, recording 1.6% y/y, up from 1.2% in August. Household credit growth moderated to 5.4% y/y, from 5.7% previously, weighed by slower growth in instalment sale credit (predominantly vehicle finance) as well as the unsecured credit components. Nevertheless, credit uptake by households remains relatively robust, supported by the continued growth in mortgage credit. Meanwhile, credit extended to corporates continued to contract, albeit at a slower pace, recording -1.4% y/y from -2.3% previously. General loans and advances, which forms the biggest share of corporate credit, declined at a slower pace in September, by 3.5% y/y from -5.8% in August. Growth in mortgage advances (by corporates), which has slowed significantly from a peak of 10.3% y/y in May 2020, remained stable at 2.8% in September 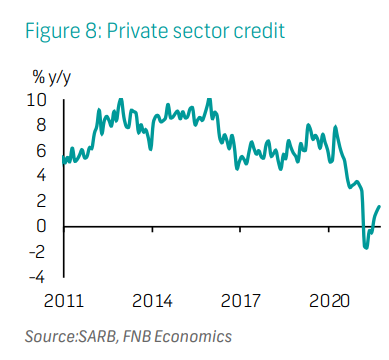 The FNB/BER building confidence index for 3Q21 will be published on Tuesday. Building Confidence declined to 35 index points in 3Q21, from 39 in 2Q21, reflecting that 65% of respondents across the building sector pipeline are dissatisfied with prevailing business conditions. While the composite index remained higher than the average of the past few years, it is concerning that the index, excluding the hardware retail and building material manufacturing sector – a measure of confidence in the “core” building sector, fell to 20, from 25 in 2Q21. Confidence in the core building sector has been noticeably lower than the overall composite index since the start of the year, highlighting the persistent weakness in the larger (by value) brick and mortar segments. Lack of new projects, waning profitability and delays at municipalities in approving projects were among factors weighing on confidence in the sector. 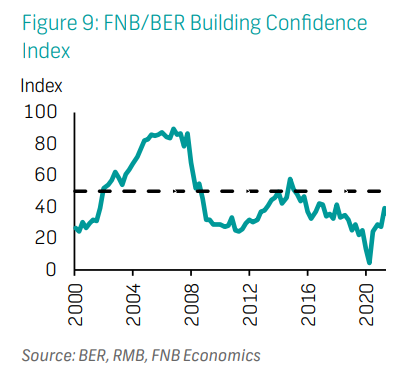 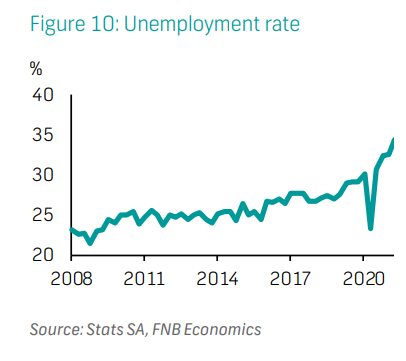 Also on Tuesday, the trade balance for October will be published. The nominal trade surplus (not seasonally adjusted) narrowed to R22.24 billion in September, a moderation from the surplus of R42.27 billion in August. The YTD cumulative trade surplus amounted to R352.21 billion (between January and September), compared to R167.6 billion in the corresponding period last year. The moderation in the monthly trade surplus was attributed to export values falling by 1.0% m/m (R1.57 billion) while import values increased by 15.9% m/m (R18.47 billion). Still, export values were up 37.5% YTD, ahead of import value growth of 22.6% YTD. On an annual basis export values are up 16.3%, while imports are up 31.9%, reflecting weak domestic demand ast year. Going forward, lower commodity prices amid improving domestic demand should result in narrower trade balances. 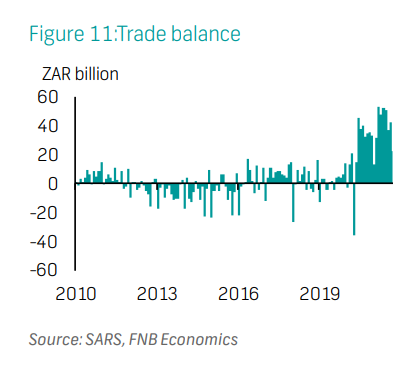 On Wednesday the Absa (JO: ABGJ ) manufacturing PMI for November will be published. The manufacturing PMI recorded 53.6 index points in October, down from 54.7 in September and 56.2 in August. Business activity slowed in September, to 46.1 index points, affected by the three-week strike in the steel and engineering sector and load-shedding, but was shielded by the move to level 1 lockdown restrictions and improved mobility. New sales orders also slowed, to 48.0 index points, reflecting weak domestic demand, while export sales improved. Purchasing prices remain elevated at 84.4 index points and should find renewed pressure from higher fuel prices in November. Supply delivery times also remain elevated, reflecting global supply bottlenecks. Employment prospects remained lacklustre, at 47.0 index points, but respondents are optimistic about business conditions in the next six months. 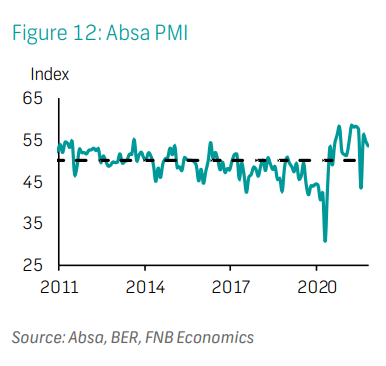 Data on new vehicle sales for November will also be published on Wednesday. Domestic new vehicle sales slowed by 4.9% between September and October, but recorded growth of 6.1% compared to September 2020. Exports continued to decline on an annual basis, contracting by 30.0%, but still reflected growth of 12.0% YTD (January to October) when compared to the same period in 2020. The vehicle market was affected by a three-week strike in the steel and engineering sector as well as load-shedding. 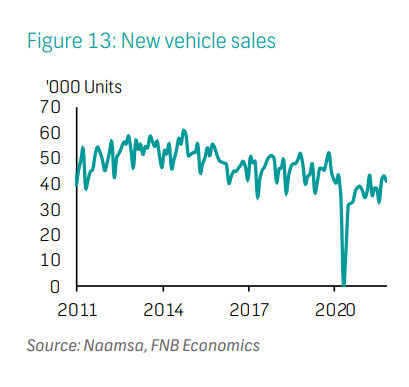