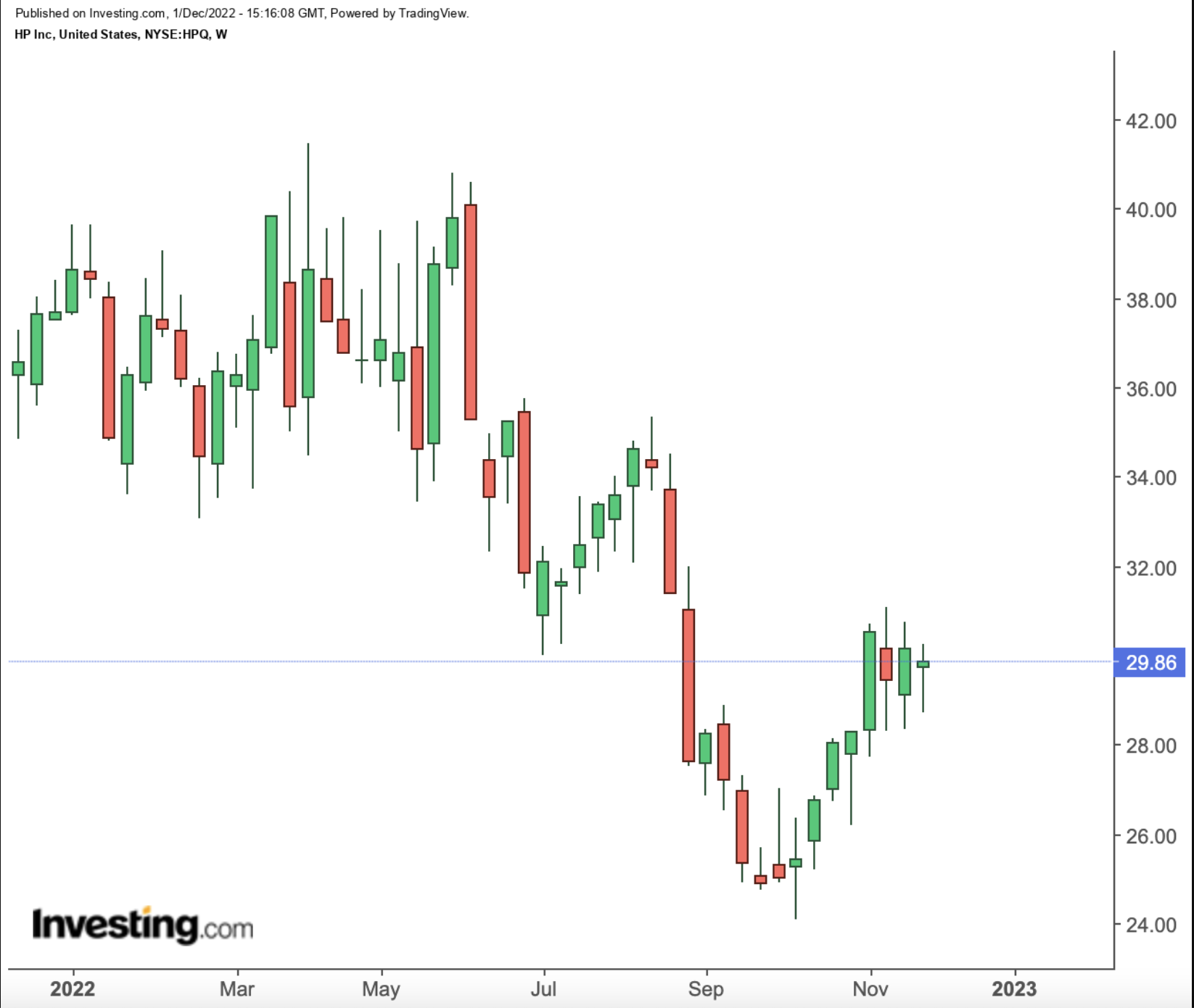 But, fundamentally speaking, valuation here does not look all that attractive. HP itself expects profits and free cash flow to decline in fiscal 2023. From that point on, the company’s reliance on the printing business suggests further weakness.

And yet, since the Q4 release, HPQ has held up, even though the company’s outlook for 2023 disappointed relative to analyst expectations. There’s one key reason: the company’s “Future Ready” plan, which contemplates substantial cost savings over the next few years.

That plan is aggressive. The question for HPQ is whether it’s enough.

Analysts and investors expected HP profits to decline in fiscal 2023. The novel coronavirus pandemic led to a surge of demand from companies adapting to remote-work environments, as well as consumers upgrading their in-home systems.

But the size of the decline does appear to have been a surprise. HP is looking for adjusted earnings per share of $3.20 to $3.60. At the midpoint, that’s a 17% decline year over year. The trajectory for free cash flow should be roughly the same.

Against that guidance, HPQ’s valuation looks reasonable at best. Shares trade at almost 9x earnings and a little over 9x free cash flow. For a business in decline, neither multiple appears out of line.

To be fair, the fact that earnings are set to decline this year doesn’t mean that profits have peaked for good. Macroeconomic conditions have weakened globally, and sales during the worst of the pandemic pulled forward demand. If FY23 is just a blip, and HP can return to long-term growth in fiscal 2024, HPQ is a steal. For one key reason, however, that’s a huge ‘if.’

As I wrote earlier this week, there’s another large-cap hardware stock in a similar situation (and with a similar valuation): Dell Technologies (NYSE: DELL ). But whereas Dell is dealing with similar pressures in its personal computer business, its networking and storage offerings potentially offer some ballast.

For HP, the key non-PC business is printing. And that seems like an enormous mid-term risk. The rise of DocuSign (NASDAQ: DOCU ) and other services creates a permanent, secular, headwind toward printing activity.

Indeed, before the pandemic, printing was the profit center for HP. The segment generated 63% of profit in FY19, and 70% the year before. Even with tailwinds behind the personal systems business of late, printing still accounted for 56% of earnings in fiscal 2022.

In recent years, HP has tried to “rebalance” its printer offering, moving away from a model where ink drove essentially all of the profits. But the goal still is only a 50/50 split, and management said after Q4 that a 10% decline in printer supplies was being driven by lower user demand.

That trend should continue — which puts at least 30%-plus of earnings at risk. Add mid-term concerns about PC demand and a high-single-digit forward multiple to free cash flow hardly seems like a steal. Rather, it seems logical.

To its credit, HP management sees this coming. And so it’s looking to take cost out of the business, notably through the reduction of as many as 6,000 jobs by 2025.

As a Citigroup analyst noted, that plan was an “unexpected major positive surprise.” Indeed, it seems like enough to have kept HPQ afloat despite the soft outlook for fiscal 2023.

The plan should have a material impact: Citi estimated a boost to earnings per share of more than $1 exiting fiscal 2025. That ostensibly would be enough to offset any incremental weakness in the core business after FY23, and would remove the concern that HP earnings have peaked for good.

But, again, the question is whether that’s enough. Before the pandemic, HP generally traded at 7x-8x earnings and free cash flow. Even with a cost-cutting tailwind, the company might still struggle to keep EPS much past $4 in FY26.

Put an 8x-9x multiple on that figure, and the stock maybe can get to $40. Including dividends, that does suggest a double-digit annualized return. But that’s in a relatively bullish scenario, in which the company doesn’t face a demand ‘cliff’ after a substantial pandemic-driven tailwind.

It’s simply difficult to get too excited about a business facing secular pressures, and looking to respond by cutting costs. The strategy certainly can work if execution is on point and the external issues aren’t as dire as feared — but that’s a rather narrow path.

Disclaimer: As of this writing, Vince Martin has no positions in any securities mentioned.