Oil bulls might still be grimacing while the bears rejoice over June’s extraordinary plunge that led to crude 's first loss in a month since November.

Moving on from that is the bigger story of what could transpire in the next 30 to 60 days: a powerful Atlantic hurricane season that could be devastating to energy infrastructure and supply on the US Gulf Coast of Mexico, and the start of a recession that could ultimately reduce demand for everything, including oil. 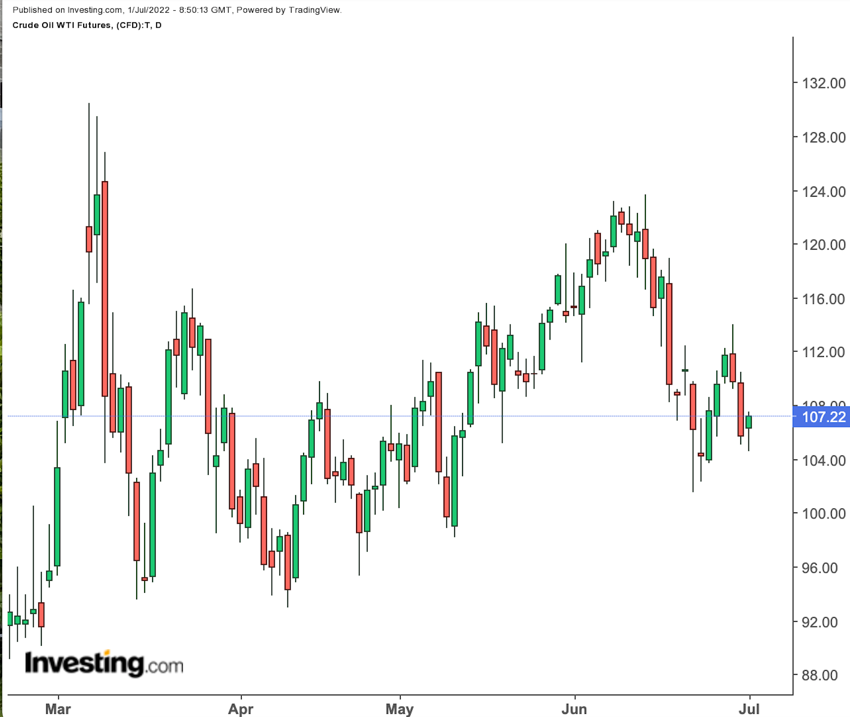 For investors in energy, it’s not really a case of choosing one over the other but having to live with both—and figuring out which ultimately might have a greater lasting impact on prices.

First off the bat is the storm season, which officially began June 1 with predictions by meteorologists for an "above-normal" year. As of Thursday, a “Potential Tropical Cyclone Two” was coursing its way across the Caribbean Sea and expected to strengthen as it approaches Central America.

"Tropical cyclones can last for a week or more; therefore, there can be more than one cyclone at a time,” the World Meteorological Organization, based in Geneva, said.

The storm working its way through the Caribbean had maximum sustained winds of 40 mph as it moved west at 21 mph about 410 miles east of Bluefields, Nicaragua, the National Hurricane Center in Miami said.

The formation could become either Tropical Storm Bonnie or a hurricane both before and after crossing land, the center warned.

While hurricanes come and go each year, any storm in 2022 could have a rippling impact on energy infrastructure, supply, and prices due to the squeeze already on barrels from sanctions piled on Russia; the apparent inability of OPEC+ to produce what consuming countries want and US shale being slower than ever in returning to its pre-pandemic drilling glory.

“When every one of these storms blow into the Gulf, no matter how big or small,  there will be shutdowns, production will close in and rigs will be evacuated.  Even refiners will go into a slowdown mode eventually to safeguard their plants. But then, their plants might get flooded, personnel can’t get in and they lose power from the grid and go offline. It’ll be the worst case scenario if any kind of major hurricane comes into the US Gulf Coast this year.”

Bloomberg columnist Julian Lee noted that record volumes of both oil and gas were being shipped out of terminals on the US Gulf coast, to buyers in Europe and Asia. A big storm, or a succession of storms as we saw in 2005 or 2008, would put those flows at risk, perhaps for several weeks.

“Powerful winds, high tides, and storm surges will put overseas shipments at risk, spreading the impact of any storm far beyond US shores,” Lee said.

“Exports of crude and refined products are running close to 10 million barrels a day.”

Kilduff concurred, saying US energy infrastructure was “more vulnerable than any time in history to storms”.

“This is because of the global situation,” he added.

“In years past, a storm comes through but it doesn’t knock us off the pedestal. This year, any one of these storms could knock the global oil market off its block.”

Equally crippling to oil could be the evolving recession in the United States.

US gross domestic product likely contracted by an estimated 1% in the second quarter of 2022, the Atlanta Federal Reserve said on Thursday. It was the first official forecast of recession by a division of the central bank, after the 1.6% economic decline in the first quarter .

Economists say the recession narrative could get uglier over the next 30 to 60 days as the Federal Reserve continues tightening the screws on US interest rates .

While officials at the central bank are racing to remove liquidity as quickly as possible from the financial system for the Fed’s rate hikes to have a maximum neutralizing impact on inflation —and the Biden administration gloats at having reduced the US budget deficit by over $1 trillion during its term—there is always the danger of leaving markets illiquid in a sudden turn of events.

Economists say the United States may be witnessing the beginnings of a real economic shakedown, only that it’s too numb to notice because of the miraculous resilience of its consumers insulated by two years of pandemic aid money; a housing market still running on that old stimulus energy and stock markets often coming back after a few days of sell-offs.

But US consumers won’t be superheroes forever and the slide into the economic abyss could come faster than thought, warn analysts.

Since the start of the year, equity prices have fallen by around 25%, bond prices have declined by more than 20%, and the cryptocurrency market has lost more than half of its value.

That has involved the evaporation of around $15 trillion, which could cause consumers to cut back heavily on spending, said Desmond Lachman, resident fellow at the American Enterprise Institute and a former official at the International Monetary Fund.

In oil markets especially, “the prospect of a recession has created more two-way price action in recent weeks, preventing any unsustainable surges in the price of crude [even] as China reopened” from COVID shutdowns, said Craig Erlam, analyst at online trading platform OANDA.