The markets have been a bloodbath thus far in June, as sharp interest rate hikes by major central banks push investors to ramp up bets of a global economic recession. This coupled with the ongoing war in Ukraine and lockdowns in China, have sapped investor sentiment and sent risk assets lower. Consequently, the MSCI All Country World Index has lost 10.3% in June thus far. The major drag has been emerging markets, with the MSCI Emerging Markets Index losing 6.5% month-to-date (MTD) followed by -2.6% for the MSCI World Index .

Inflation data from the U.S. showed that annual CPI growth unexpectedly jumped to 8.6% in May, beating market forecasts of 8.3% and marking the highest reading since 1981. This coupled with strong data from the Labor Department, allowed the Federal Reserve to raise interest rates by 75-basis-points at their meeting in June - the largest hike since 1994. Federal Reserve officials also stated that rates are likely to continue to rise steadily and that they are targeting a federal funds rate of 3.4% by year-end. As a result, U.S. treasury yields got pushed up to 20-year highs in June and the 2- and 10-year yields currently sit at 3.10% and 3.26% respectively.

U.S. stock markets have resumed their trend lower as growth and inflation fears, coupled with limited liquidity, knock risk assets. This has pulled down all three of the major indexes in June, with the S&P 500 index losing 11.3%, followed by -11.9% and -9.3% for the Nasdaq Composite and Dow Jones Industrial Average Indexes respectively (MTD figures).

Chinese stocks found some relief in May after the easing of Covid-19 restrictions allowed Shanghai and other economic hubs to reopen. This allowed the Hang Seng, China’s blue-chip index, to end May up 1.5%, the first monthly gain since January 2022. These gains have since been reversed due to fears that China’s zero-Covid policy will likely bring additional restrictions in the future as well as the impending slowdown in global growth. Consequently, the Hang Seng Index has lost 1.7% month-to-date.

In the United Kingdom, inflation data also showed a sharp jump to 9% in April – the highest level in 4 decades - and, unsurprisingly, caused the Bank of England to raise rates by 25-basis-points at their meeting in June. Continuously rising prices and interest rates continue to squeeze the pockets of UK consumers and have raised the likelihood of a recession to come. The FTSE 100 index , which enjoyed 3 consecutive months of modest gains, has followed its global peers lower and lost 7.3% month-to-date.

Commodities, as measured by the Bloomberg Commodity Index, have advanced a tremendous 31.5% year-to-date. While the momentum seems to have slowed slightly, there are no indications that the trend will not continue. The price of oil recently hit 3-month highs in June as several factors threatened to further tighten the market. The latest escalation came from China, the world’s largest importer of energy, who recently eased lockdown restrictions and thus opened the taps to extra demand at a time when supply is already tight. Any further increases may, however, be capped in the short-term as worries of a global slowdown weigh on prices.

South African equities have also come under pressure, with the FTSE/JSE All Share Index losing a further 8.6% month-to-date, after shedding 4.1% in May. The biggest drags on performance have been the resource and financial sectors which have lost 10.0% and 10.8% respectively, followed by industrials with -6.6%. The SA-listed property also continues it's decent lower and has lost 6.1%. (All MTD figures). 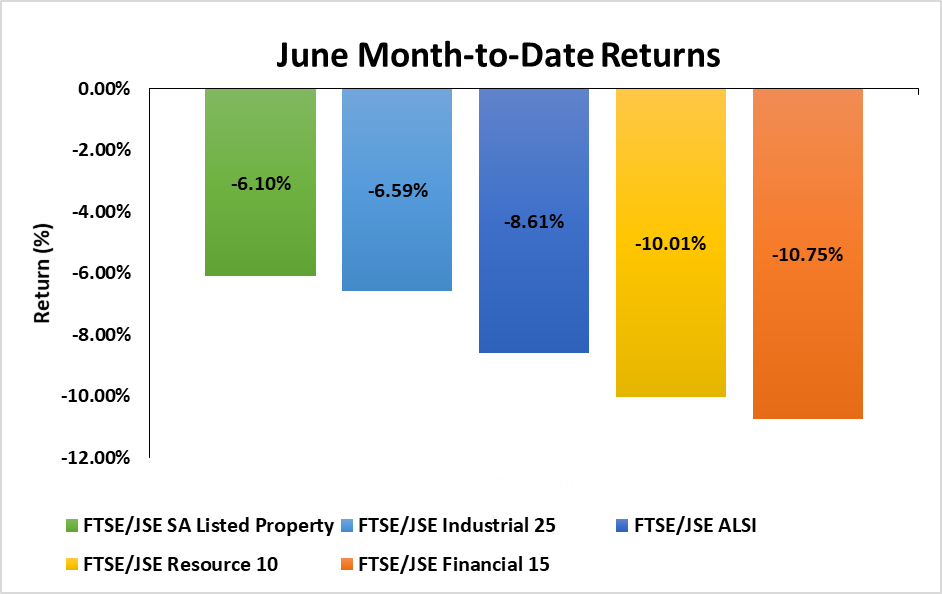 Disclaimer: All returns data are in the respective currency of the region mentioned. All YTD and MTD returns are as at time of writing.