With the NASDAQ Composite trading near its lowest level in months, the result of the recent broad-based selloff in the tech space, most of the focus will once again be on the so-called ‘FAAMG’ group of mega-cap companies.

Under these circumstances, there will be a lot on the line when the market’s five biggest tech companies comprising the 'FAAMG' group, namely, Meta Platforms (formerly Facebook), Apple, Amazon, Microsoft, and Google, report their respective results in the days ahead.

Here's a closer look at what to expect this earnings season from the FAAMG Five (in random order).

Microsoft (NASDAQ: MSFT )—which has topped Wall Street’s expectations for earnings and revenue for 18 consecutive quarters dating back to Q1 2017—has consensus estimates calling for the software and hardware giant to post earnings of $2.31 per share for its fiscal second quarter, improving roughly 14% from EPS of $2.03 in the year-ago period.

Revenue is expected to cross the $50 billion mark for the first time in history to an all-time high of $50.6 billion, up 17.5% from the same period a year earlier thanks to strong demand for its cloud computing products.

As such, investors will focus on growth in Microsoft’s booming Intelligent Cloud segment, which includes Azure, GitHub, SQL Server, Windows Server, and other enterprise services. Microsoft’s commercial cloud revenue rose 31% YoY to $16.96 billion in its most recent quarter , while revenue from its Azure cloud services grew 50%.

Market players will also be eager to hear fresh details on the company’s acquisition of video game giant Activision Blizzard (NASDAQ: ATVI ) for $68.7 billion—its largest acquisition in history—as it steps up efforts to become a major player in the emerging metaverse, which is viewed as the next-generation version of the internet.

MSFT, which is down 10% so far this year, ended Tuesday’s session at $302.65. With a market cap of $2.28 trillion, Microsoft is the world’s second-most valuable company.

Despite recent volatility, the Redmond, Washington-based tech giant's stock still looks like a good bet going forward, given the robust demand for its cloud-based offerings and plans to enter the emerging metaverse space.

Not surprisingly, 42 out of 45 analysts surveyed by Investing.com rate the stock as “outperform,” implying almost 22% upside from current levels to $368.52/share. 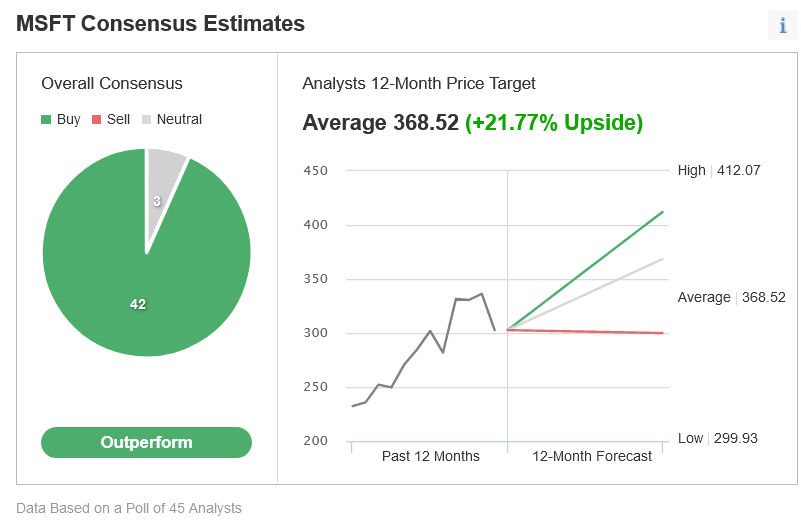 Apple (NASDAQ: AAPL ) reported mixed earnings and revenue in the previous quarter largely due to supply chain woes. In its next scheduled posting next week, financial results covering its all-important holiday period will be closely eyed.

Analysts are calling for earnings per share of $1.89 for its fiscal first quarter, climbing 12.5% from EPS of $1.68 in the year-ago period. Revenue is forecast to increase 6.3% from the same period a year earlier to $118.49 billion.

If confirmed, it would mark Apple’s largest quarterly revenue total in the company’s history, benefitting from strong demand for its lineup of 5G-enabled iPhone models.

As such, Wall Street will pay close attention to growth in Apple’s iPhone revenue, which jumped 47% YoY to $38.87 billion in the previous quarter. Any updates on growth in the tech giant’s iPad and Mac business, which posted YoY revenue growth rates of 21.4% and 1.6%, respectively, in the last quarter, will also be centered upon, as it copes with supply constraints linked to the global chip shortage.

In addition, Apple’s booming services business, which includes sales from the App Store, music and video subscription services, extended warranties, licensing, and advertising, will be in focus following posting of 25.6% YoY revenue growth in fiscal Q4.

AAPL—which has fallen 4.4% so far in January—ended Tuesday’s session at $169.80. At current levels, the Cupertino, California-based consumer electronics conglomerate has a market cap of $2.77 trillion, making it the most valuable company trading on the U.S. stock exchange.

We anticipate the positive trend in Apple to continue in the months ahead amid enthusiasm surrounding the company’s plans to develop its own electric vehicle as well as augmented reality and virtual reality (AR/VR) products geared for the metaverse.

Indeed, 35 out of the 41 analysts surveyed by Investing.com are optimistic on AAPL stock, forecasting a gain of roughly 3% from current prices to $175.17/share. 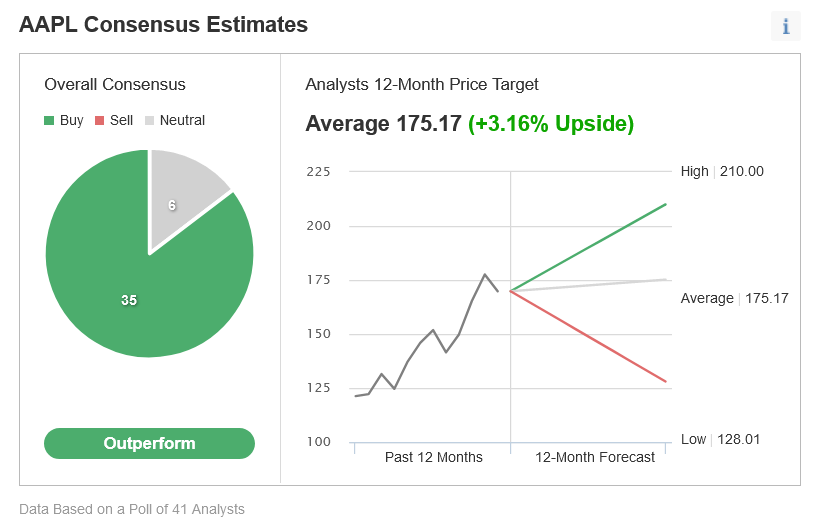 Google-parent Alphabet (NASDAQ: GOOGL ), which easily topped expectations for earnings and revenue in the last quarter amid broad strength in the online advertising market, has analysts calling for fourth-quarter earnings of $27.54 per share, improving by 23.5% from EPS of $22.30 in the same quarter a year earlier.

Revenue is forecast to clock in at an all-time high of $72.0 billion, increasing about 27% from the year-ago period, driven by an ongoing surge in digital ad spending.

As such, investors will stay laser-focused on growth rates at Google’s core ad revenue business, which saw a YoY gain of 43% to $53.1 billion in the previous quarter. YouTube ad revenue growth, which climbed 43% from a year ago to $7.21 billion in the last quarter, will also be scrutinized.

In addition, one segment that should be primed for another quarter of blockbuster growth is Alphabet's Google Cloud Platform, which saw sales surge 45% to $4.99 billion in Q3. The tech giant has been investing heavily in its cloud business as it plays catch up with Amazon Web Service and Microsoft Azure.

Last year’s best-performing ‘FAAMG’ stock, with an annual gain of nearly 65%, GOOGL ended Tuesday’s session at $2,719.96. At current levels, the Mountain View, California-based tech behemoth has a market cap of $1.81 trillion, making it the third most valuable company trading on the U.S. stock exchange.

We expect GOOGL stock to continue its strong uptrend in the year ahead thanks to robust demand for its innovative products and services. Indeed, the quantitative models in InvestingPro point to approximately 19% upside in GOOGL stock to a fair value of $3,234.38/share. 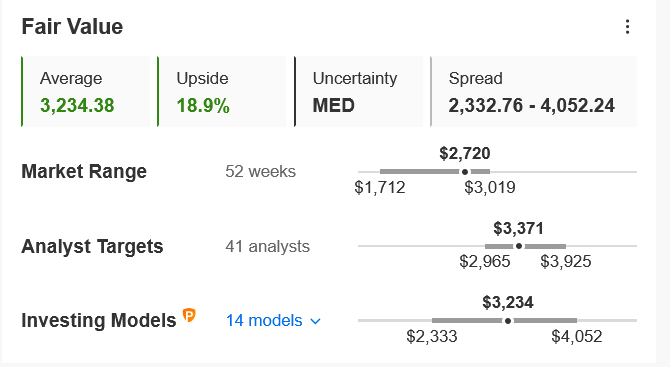 Amazon.com (NASDAQ: AMZN ), which reported its second straight revenue miss in the last quarter and provided weak guidance, is anticipated to report earnings per share of $3.73, sinking 73.5% from EPS of $14.09 in Q4 2020, due to tough year-over-year comparisons, higher labor expenses, and increased shipping costs related to global supply chain constraints.

Revenue is expected to climb less than 10% from the year-ago period to $137.8 billion, as e-commerce growth slows amid fading pandemic-era lockdown restrictions and consumers flocking back to physical stores in greater numbers.

Beyond the top-and-bottom line numbers, investors will focus on Amazon’s thriving cloud unit to see if it can maintain its torrid pace of growth. Amazon Web Services’ (AWS) revenue rose 39% to a record $16.1 billion in the third quarter, solidifying its spot as the leader in the cloud-computing space, ahead of Microsoft Azure and Google Cloud.

Advertising revenue, which has increasingly become another major growth driver for Amazon, will also be closely looked at. While Amazon does not disclose advertising sales figures, they are included in the company’s fast-growing “Other” category, which saw revenue surge roughly 50% in Q3.

AMZN finished 2021 with a meager 2.4% gain to vastly underperform the four other so-called FAAMG stocks. It closed at $3,178.35 last night. With a valuation of $1.61 trillion, the Seattle, Washington-based e-commerce and cloud giant is the fourth most valuable company listed on the U.S. stock exchange.

Even though the company's recent profit and sales growth failed to impress investors, we believe Amazon is well-positioned to march higher in the coming months, considering its leading position in the e-commerce, and cloud-computing spaces.

According to the InvestingPro model, AMZN stock could see an increase of more than 23%, bringing it closer to its fair value of $3,921.56 per share. Analysts also remain bullish on the stock, citing expectations for a rebound in its e-commerce business. 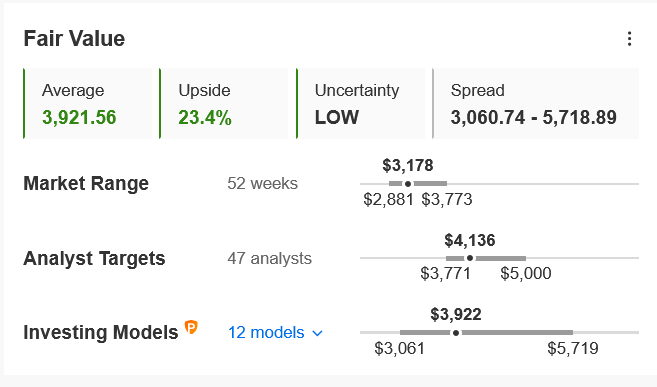 Facebook previously warned that higher costs and investments related to its hardware and VR segment will reduce full-year 2021 operating profit by approximately $10 billion.

Revenue is forecast to increase about 19% YoY to a record high $33.3 billion, boosted by strong advertiser demand and higher ad prices.

Perhaps of greater importance, investors will focus on the company’s plans to build and develop the metaverse, a virtual world simulation in which multiple people can interact within a 3D environment.

Highlighting the shifting digital landscape, Meta recently broke out its Reality Labs unit, which focuses on consumer hardware, such as Oculus virtual reality headsets, into its own reporting segment starting in the fourth quarter. Meta will also release growth metrics for its family of apps, which include Facebook, Instagram, Messenger, and WhatsApp, for the first time in the company’s history.

Comments from CEO Mark Zuckerberg on the post-earnings call will also be in the spotlight as the social media platform shifts away from its advertising-based business and positions itself for an increasingly digital future.

FB, which is down more than 5% year-to-date, ended at $318.15 on Tuesday. At current levels, the Menlo Park, California-based tech giant is valued at $885 billion, making it the sixth most valuable company traded on the U.S. stock market.

Despite the recent pullback, we expect Meta to outperform the broader market in the months ahead. While analysts are a little more conservative, the quantitative models in InvestingPro point to 31% upside from current levels to $417.46/share. 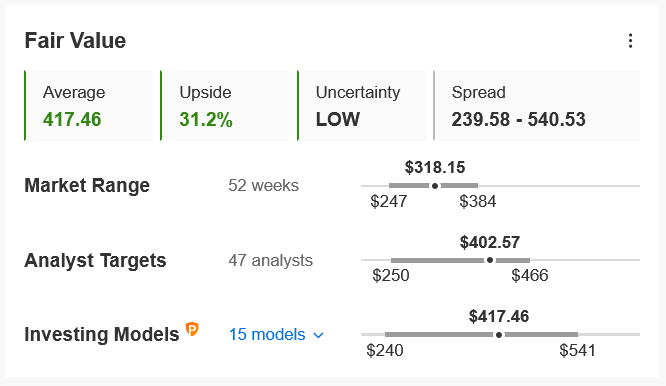