Total mining output (not seasonally adjusted) grew by 21.3% y/y in March, up from a downwardly revised contraction of 2.3% y/y (previously: + 0.8% y/y) in February. Non-gold mining production grew by 23.2% y/y following a 1.1% y/y contraction in February. The out-turn for overall mining production growth was materially above the Bloomberg consensus prediction for growth of 9.4% y/y. Sustained higher commodity prices and rising external demand remain supportive of mining activity. However, the more robust growth in mining output could largely be attributed to reduced output levels from last year's supply chain disruptions and lockdown restrictions (i.e. the lower base effect in 2020). Due to this phenomenon, mining output will undoubtedly post more robust year-on-year growth rates in April and May.

originally: 3.8% m/m) in February. Overall, seasonally adjusted mining output grew by 3.9% in 1Q21 after contracting by 1.6% in 4Q20- therefore, this means that the mining sector meaningfully supported overall real GDP growth in 1Q21. Our estimate is for the sector to have contributed around 0.3 ppt to overall quarterly real GDP growth.

So far, this data print and the manufacturing output data published earlier this week implies that the South African economy avoided a double-dip recession in 1Q21. Next week's retail sales will provide further clarity on how the economy fared in 1921. Last year's growth for the agricultural sector is expected to be sustained.

Our near-term outlook for the mining sector remains intact. We expect mining activity to be supported by the sustained higher commodity prices from last year and the anticipated robust economic growth rebound, mainly from South Africa's major trading partners. However, near-term potential risks include the slow roll-out of vaccines (versus the imminent third wave of infections) and the unresolved electricity supply, which could both limit production even as the global economy recovers.

Over the medium- to long-term, domestic mining activity might be supported by the likelihood of more infrastructure investment in the US, eurozone and other regions. 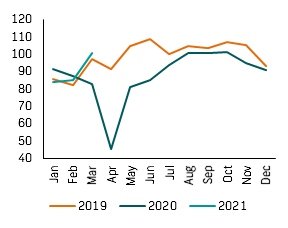 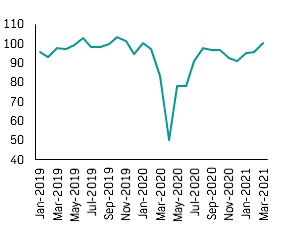