In case you didn't follow the news in the last few weeks, perhaps you didn't see that Bitcoin fell about 30% since its peak on 14 April. Normally, this wouldn't be a reason to worry for Bitcoin, given that high volatility is inherent to the crypto world (Bitcoin soared 525% since the beginning of 2020).

Nevertheless, something unusual has been happening in the last few days. After Tesla (NASDAQ: TSLA ) bought $1.5 Bi worth of Bitcoin back in January (and profited quite a lot from it), Elon Musk has been criticizing it openly, saying that it's damaging the environment since it consumes a lot of energy.

This surprised many investors because until a few days ago, Musk was seen as the shepherd of the crypto world.

At the same time, surprisingly, Musk continues to defend Dogecoin, a cryptocurrency created after a meme, and that it does not appear to have much room for improvement in the future (while Bitcoin does).

In this article, I will go over the potential motives behind Musk's recent behaviour and what to expect for the future. 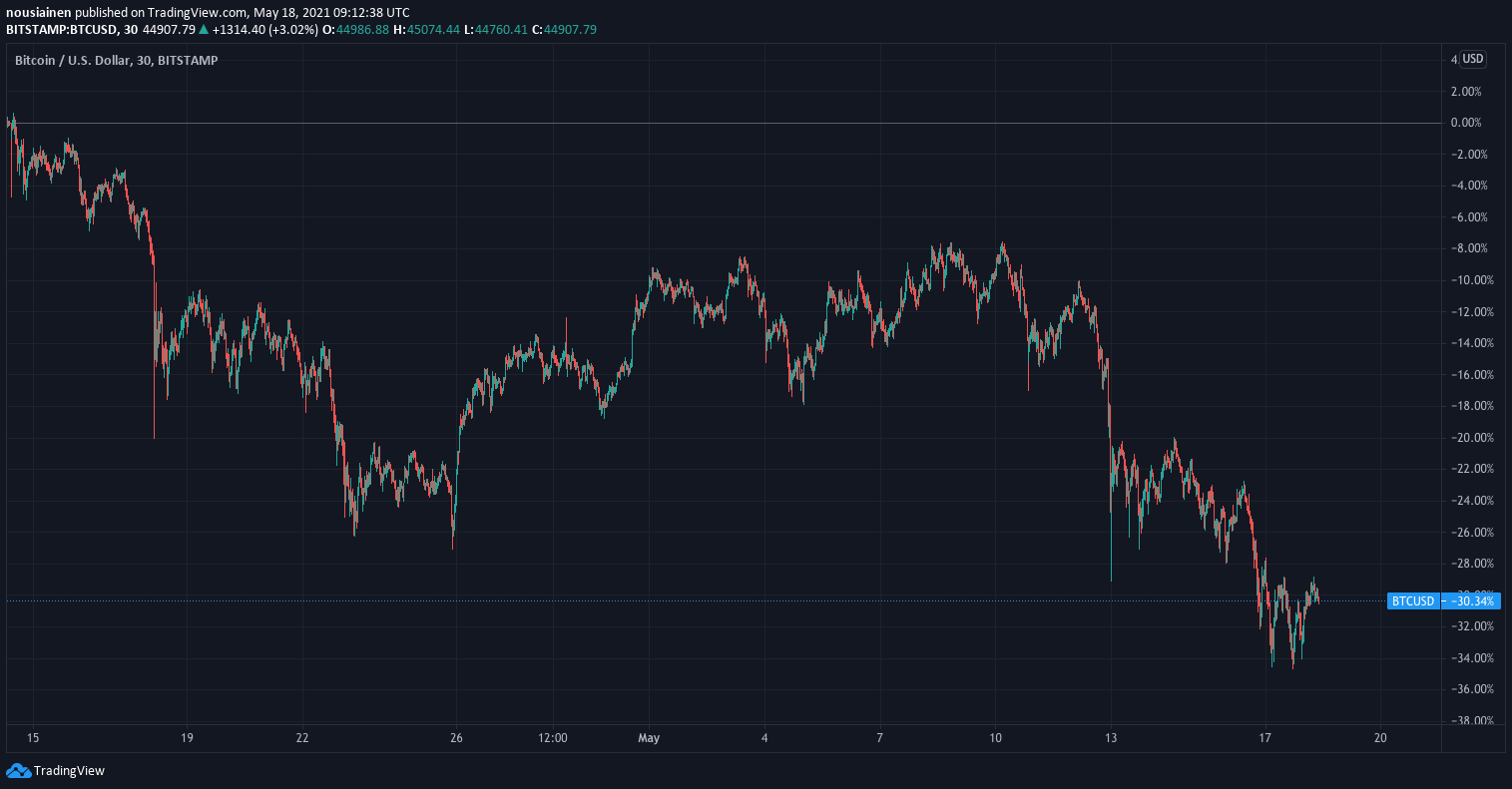 The brief love between tesla and bitcoin

In the results announced on its 10-K, Tesla (NASDAQ: TSLA ) revealed publicly for the first time that it had bought $1.5bi worth of Bitcoin in January. This decision was justified on the fact that Tesla has a considerable amount of cash yielding very little (due to low interest rates). So in order to diversify its holdings, they decided to invest a part of it into Bitcoin , with a long-term holding focus.

Furthermore, the company said that they would start accepting purchase orders for its cars paid with Bitcoin. At the moment, it was big news to the market and it made the cryptocurrency soar.

And this was what happened in the last quarter. The company had a realized profit of $128 million on the sale of Bitcoin (they sold about 10% of the initial holdings), but they had an impairment charge of $27 million on the remaining positions.

This represents a big accounting risk for the company, because it still generates very little profits (and only because of the sale of carbon credits). Therefore, holding Bitcoin (which is very volatile) on its balance sheet has a negative asymmetry for the company, in case it does not sell its Bitcoins.

On 13 May, Musk tweeted that Tesla would no longer accept Bitcoin as payment and that he would work with Dogecoin developers to improve its energy efficiency. According to Musk, Bitcoin consumes a lot of energy from fossil fuels, especially coal, which is harmful to the environment.

It's not public how many Teslas have been purchased until then with Bitcoin, but the news took the market back. Mainly because Musk knows a lot about energy, and, as such, he should have known about Bitcoin's energy consumption (currently more than Sweden) in the first place.

If bitcoin was a country, it would be ranked 27th in the ranking of energy consumption 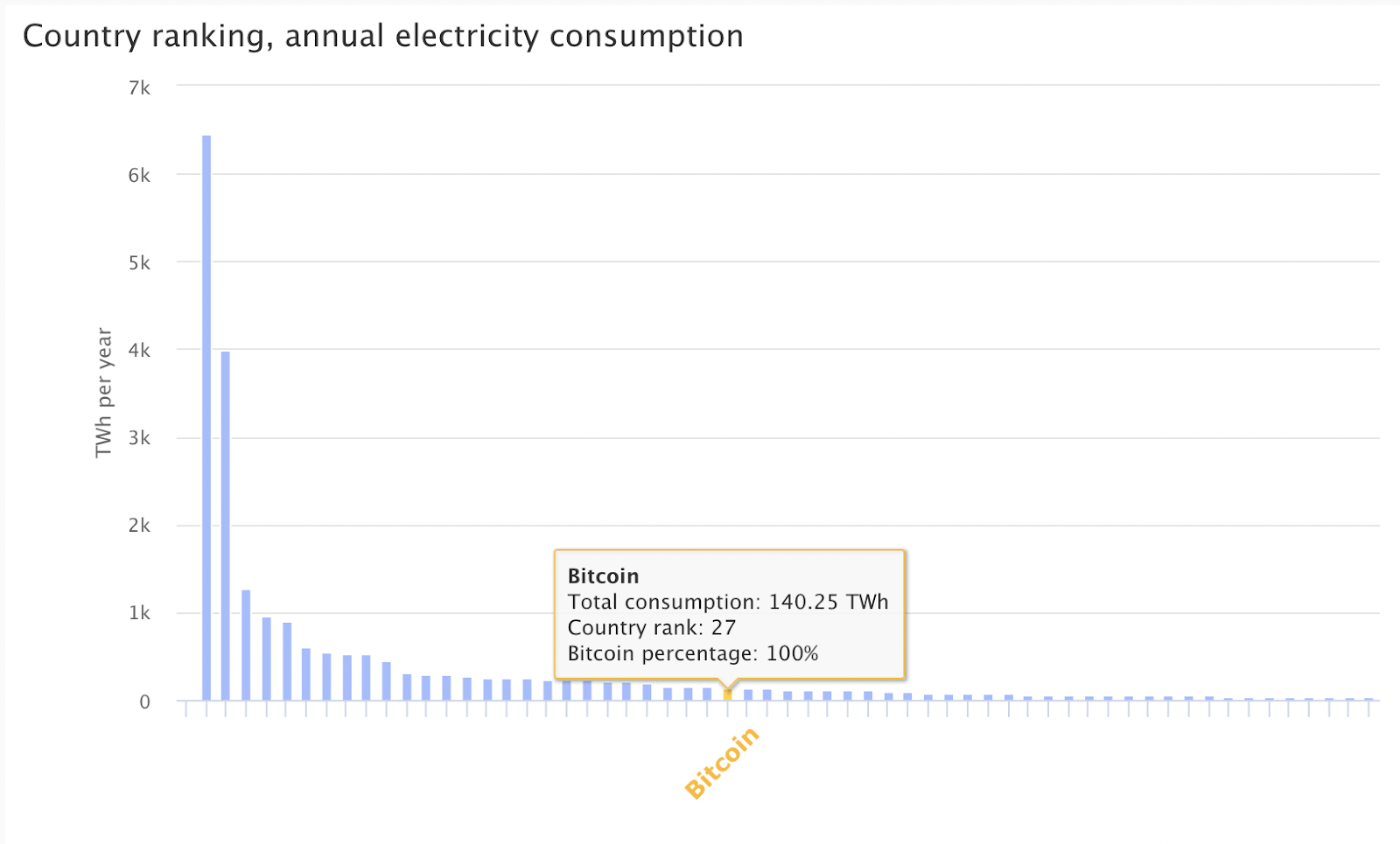 Furthermore, about 76% of Bitcoin miners say they use energy from renewable sources, which is 4 times higher than the global average. Although it seems that "only" 39% of the total energy used by miners comes from renewables.

In any case, all this information was publicly available for a long time, and Musk already knew it before Tesla bought Bitcoin. In a podcast with the Ark team (from Cathy Wood) back in February 2019, Musk was already speaking about Bitcoin's high energy consumption.

So why did Tesla buy in and give up on Bitcoin in such a short time? Maybe there are other still unknown reasons. Some people say that Tesla had a lot of negative PR after buying Bitcoin. Others argue that Tesla could lose its rights to sell carbon credits to other car companies, given that Tesla would be increasing its carbon footprint with Bitcoin. In the end, we still don't really know what happened, but what do you think?

The other romance of musk: dogecoin

Musk has been publicly boasting about Dogecoin's attractiveness for some time.

Dogecoin is a cryptocurrency created in 2013 by two developers (Billy Markus and Jackson Palmer) that wanted to create a more friendly version of Bitcoin: more fun, cheaper, faster transactions and easy to understand. They then chose a viral meme at the time, a dog from the breed Shiba Inu that usually speaks broken English sentences. So Dogecoin started as a meme (and it still is).

What's interesting is that Dogecoin is a fork (a descendent) from Litecoin , which is also a fork from Bitcoin. In other words, Dogecoin has some similarities to Bitcoin, but it's much simpler (it took only 2 hours to write the code)

But what about the differences between them?

At the time, Dogecoin was trading around $0.004. Since then, there were a series of tweets from Musk, including one where he called himself: the Dogefather. This created heavy momentum for the coin, which jumped to the current price of $0.40, a 100x rise in just 6 months. MUCH NICE!

It seems, however, that the relationship of Musk with Dogecoin started in 2018, and that he was working with Doge developers to escalate it without much energy consumption.

The problem lies in the fact that Dogecoin does not have a full time dedicated team of developers. Actually, its founders abandoned the project in 2015 and the protocol hasn't seen improvement in years.

Furthermore, there are hundreds of other crypto projects that use very little energy, are fast, secure and cheap to use. So why does Musk still prefer Dogecoin?

Finally, is Musk right in the way he talks about Bitcoin in the last few weeks, might be able to boast (shilling) it or criticizing (FUDing) it?