Against the backdrop of the Freeport LNG crisis, Cheniere has reached a final investment decision to add 10 million tonnes of liquefied natural gas a year to the current capacity of its Corpus Christi LNG facility. 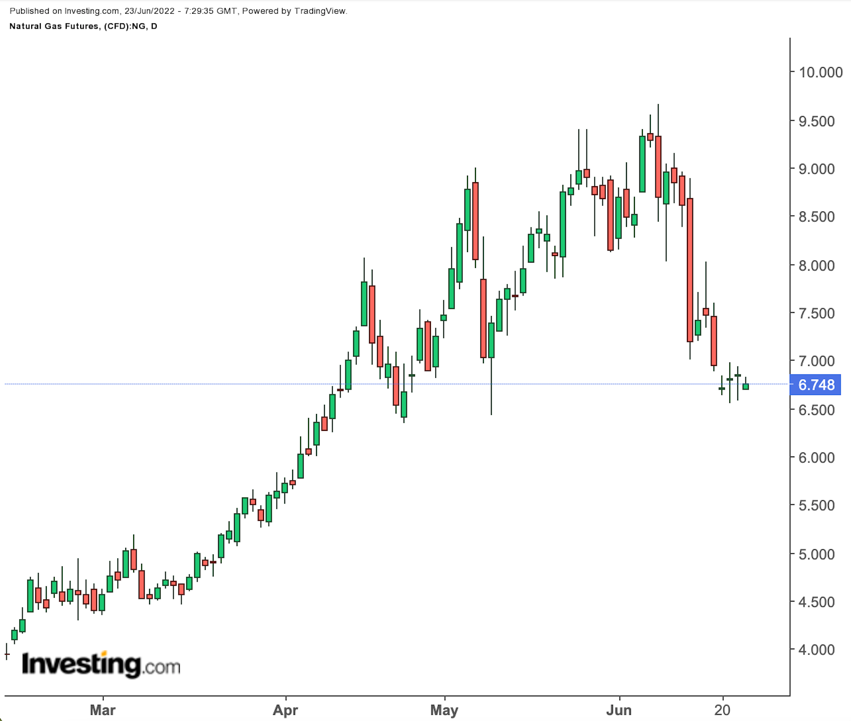 The expansion, to be completed by end-2025, will position US domestic LNG to grow to an export capacity of beyond 22 billion cubic feet (bcf) per day by the end of 2026 from a current 13 bcf/d.

Corpus Christi’s Stage 3 comes on the heels of the May 25 announcement by Venture Global LNG to make a final investment decision (FID) to build the proposed Plaquemines LNG export plant in Louisiana.

Plaquemines is the first US LNG project to reach financial close since Venture Global's Calcasieu Pass in August 2019. Calcasieu delivered its first LNG earlier this year.

Venture Global said it has 20-year agreements to sell LNG covering about 80% of the full 20-MTPA Plaquemines project.

FID for any of these facilities could push LNG export capacity beyond 26 bcf/d by the end of 2026.

“The current tightness in the LNG market has benefited these LNG projects, pushing them quickly through the process of US infrastructure development,” Houston-based gas markets consultancy Gelber & Associates said in a Wednesday email to its clients, seen by Investing.com.

As Europe shifts away from Russian gas and pivots towards LNG, the United States will be expected to play a significant role as a major natural gas exporter.

While the US has long been a swing supplier in natural gas, it only became relevant of late when Europe and Asia needed to fill in demand gaps caused by the Russia-Ukraine war. Since last winter, the US has proven that it will be able to play a larger, more dominant role in the global LNG market.

Gelber, however, added that there were still some unknowns about the new, upcoming US LNG capacity.

“It will remain to be seen whether 1) there is sufficient production growth to supply these facilities and 2) these terminals will be able to return profits in a more “normal” environment where LNG netbacks are lower,” the consultancy wrote in the email to its clients, adding:

“Regardless, expectations for additional demand have lifted the end of the forward curve past 2025 higher and will likely steepen the existing contango in the outer years.”

Contango is a commodity markets structure where contracts in farther months are priced more than those for nearby delivery. A typical contango structure would make a speculator who does not take delivery of a commodity, but “rolls” the investment month-to-month by switching out an expiring front-month to an active forward month, poorer.

The premium in gas futures on New York’s Henry Hub has dramatically collapsed over the past couple of weeks after the June 9 explosion at the Freeport plant idled some 2.1 bcf/d of natural gas supply in a severely-constrained market, where storage had consistently been under five-year averages for months.

Until the Freeport crisis came along, Henry Hub futures had been coasting at or near 14-year highs, with the front-month contract reaching a peak of $9.66 on June 8—a day before the blast.

Now, the same contract hovers under $7.

Charts suggested that short-term momentum on Henry Hub’s front-month was trapped in a tight range of between $6.97 and $6.55, said Sunil Kumar Dixit, chief technical strategist at skcharting.com. He explained:

“A sustained break above $6.97 will help prices rise and retest the $7.24 horizontal resistance and the 50-Day Exponential Moving Average of $7.67.”

Some analysts polled by naturalgasintel.com found that gas deliveries to US LNG facilities had slipped to around 10.5 bcf/d. The portal’s LNG Export Tracker, meanwhile, showed a recovery in feed gas volumes to around 11.2 bcf/d suggesting that demand elsewhere was filling in for the lack of processing at the Freeport facility.

“With the gas market reeling from the Freeport LNG extended outage, any hints of rising supply could add incremental bearishness and selling pressure” ahead of the expiry of Henry Hub’s front-month July contract, EBW senior analyst Eli Rubin said in comments carried by naturalgasintel.com. 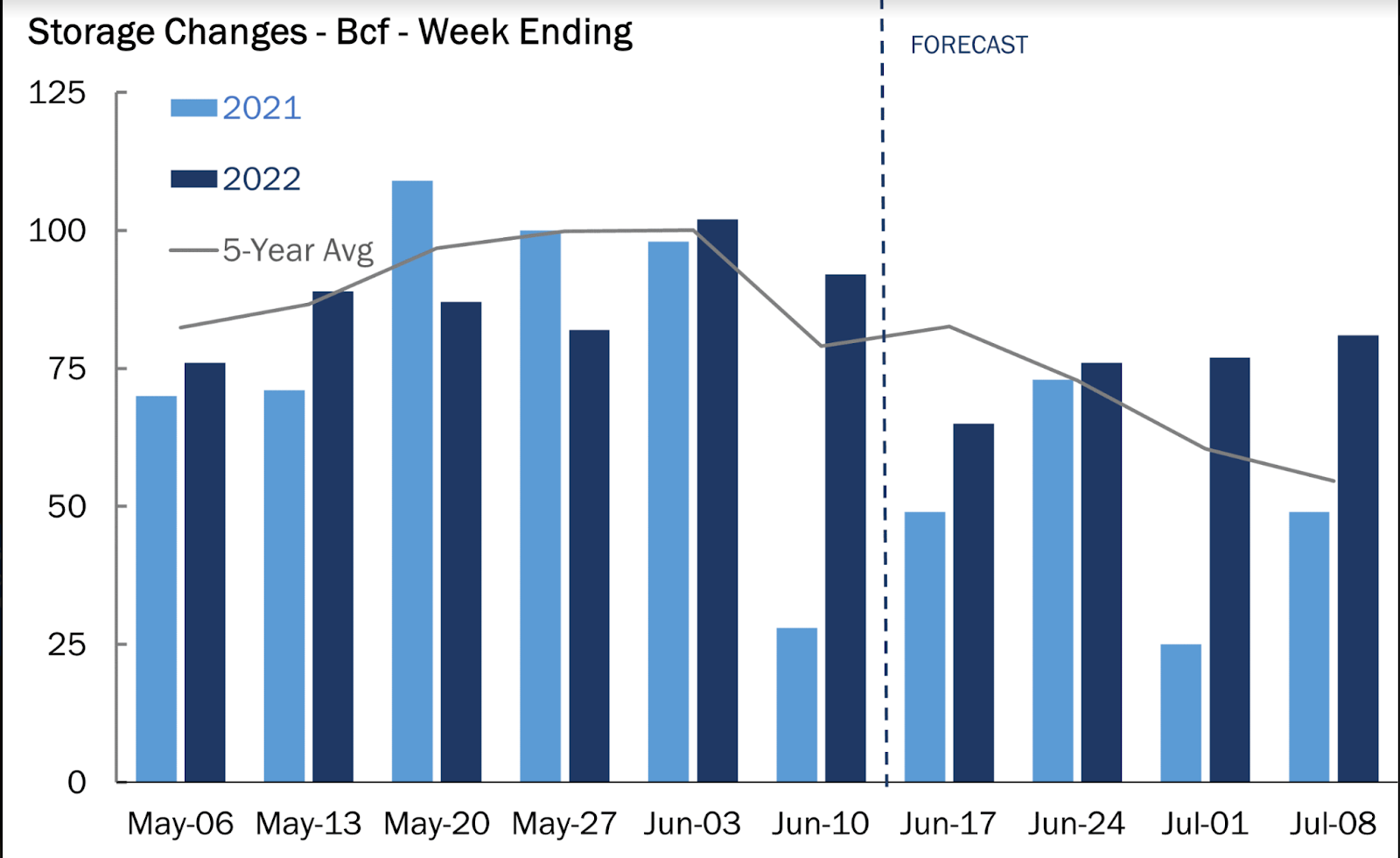 Prior to that, the weekly update on gas storage by the US Energy Information Administration is expected to show a much smaller build of 65 bcf as hot weather likely boosted the amount of gas that generators burned to keep air conditioners humming, according to a consensus of analysts tracked by Investing.com.

Reuters-associated data provider Refinitiv said there were around 89 cooling degree days (CDDs) last week, which was more than the 30-year normal of 63 CDDs for the period. Used to estimate demand to cool homes and businesses, CDDs measure the number of degrees a day's average temperature is above 65 degrees Fahrenheit.

In the prior week, utilities added 92 bcf of gas to storage.

The injection forecast for the week ended June 17 would lift stockpiles to 2.160 trillion cubic feet (tcf), about 13.6% below the five-year average and 12.7% below the same week a year ago.