Cash prices for natural gas have already broken above $10 and it seems natural for futures to follow.

There’s one problem though: Futures are heavily overbought. 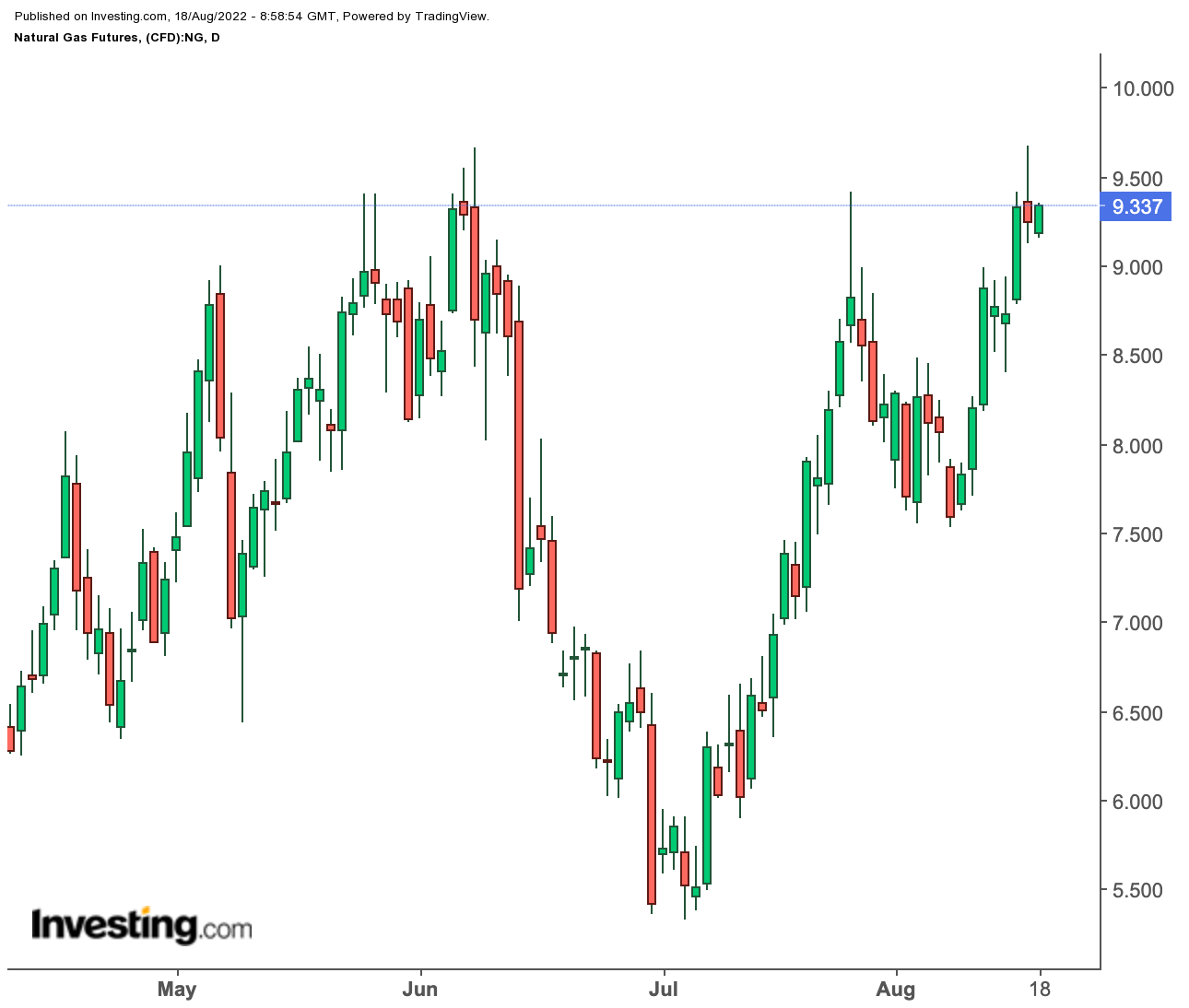 Not that it matters to longs and speculators who’ve been flattening every resistance point in the market over the past two weeks, as gas bulls experience their most phenomenal year in a decade and a half.

With just one month in the red over the past six, gas futures on New York Mercantile Exchange’s Henry Hub have smashed the performance of oil and all other energy markets, delivering a return of 138% to those who rode the rally from February's low of $3.88 per thermal unit to the previous day’s settlement of $9.24.

With Wednesday’s session already resulting in a 14-year high of $9.67, the hub’s front-month, September, has less than 35 cents to go for its first double-digit pricing since July 2008.

Were that to happen, very little of that action will have any fundamental backing, say those in the know.

Production of dry gas in the United States is rising by the day and could reach an all-time high of 99 billion cubic feet (bcf) a day or more by the end of the year.

Record gas prices in Europe, meanwhile, have attracted a flood of liquefied natural gas (LNG) that has the continent on track to fill storage to a target of 80% by November 1.

And large parts of the Lower 48 U.S. states are forecast to see below-normal temperatures this week, with some areas being 20 to 30 Fahrenheit cooler than the week before, meaning little or no need for air-conditioning—the driver for summer gas demand.

“Most market participants can provide the news-generated ‘excuses du jour’ for the supposed reasons why NYMEX gas futures are so bullish, such as [why] skyrocketing global LNG prices are influencing NYMEX gas futures higher, [despite] record-high dry gas production having a tendency to pull back [the market] during the work-week amid maintenance operations.”

“These reasons do not really justify September natural gas prices.”

September resides in the lower demand shoulder period for gas between the summer and winter seasons, which is typically not very bullish for gas consumption. Dry gas production is currently sitting at roughly 5 bcf higher than this time last year, which isn’t bullish. 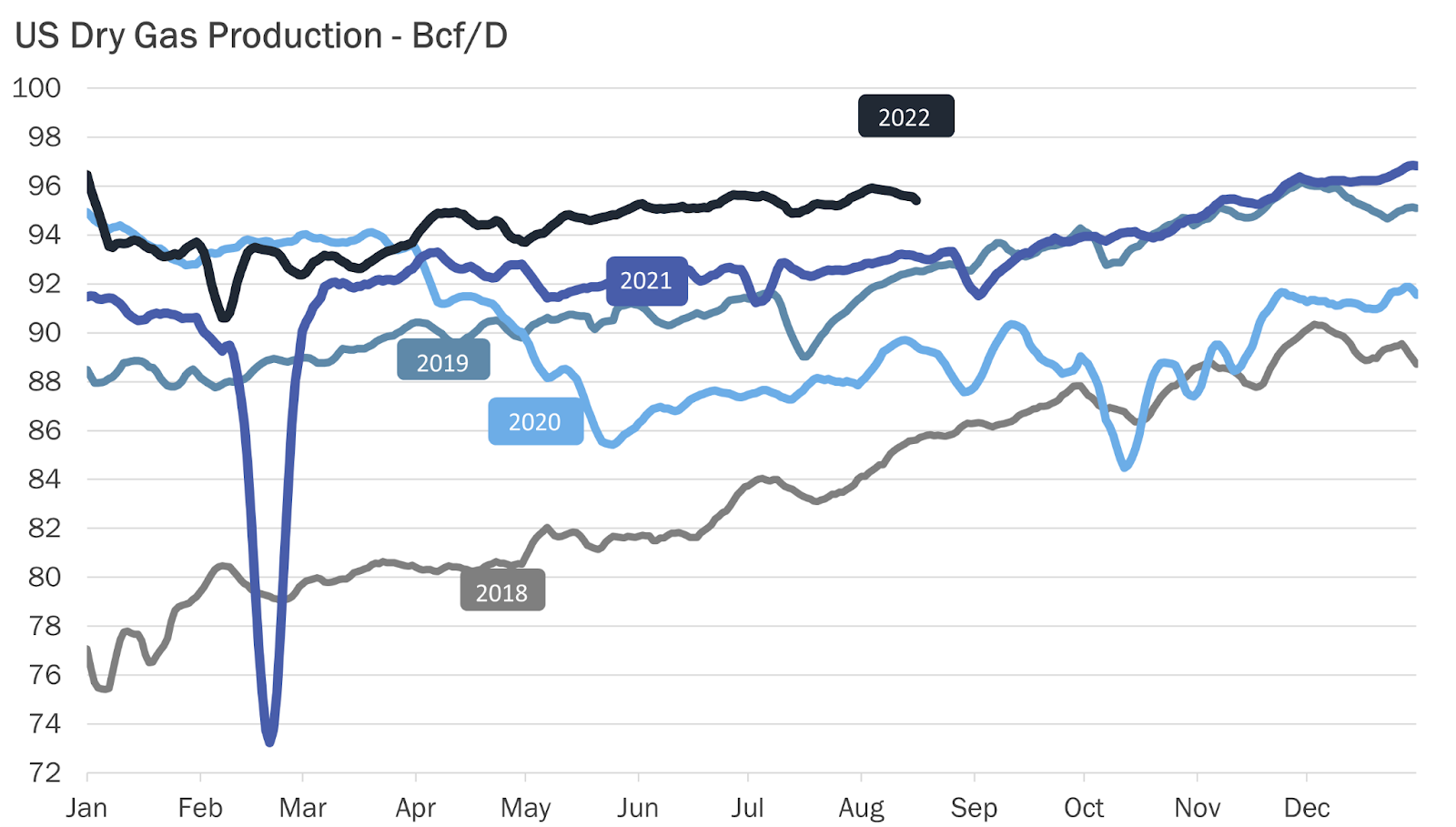 On the side of wet gas, LNG export capacity is maxed out at around 13 bcf per day—including the shuttered Freeport LNG facility—so regardless of how high global LNG prices might ascend, the United States can’t export any more natural gas.

Meanwhile, the three-week temperature forecast for the near entirety of the southern tier of the U.S.—where all the hefty cooling degree days are concentrated—is showing unusually below-average temperatures. Once again, this isn’t bullish. The last few weekly storage builds have come in larger than expected and the gas storage injections over the next several weeks will likely come in larger as well, which is not bullish.

As natural gas prices have remained so elevated for most of the year, the economic conditions they create often lead to demand destruction across a bevy of industries. This is not bullish either. The recent tumble in U.S. crude oil prices cannot be considered as bullish either for natural gas futures.

The tropical season, meanwhile, is lighting up with multiple waves in the forecast coming off of Africa, which not only increases the chances of weather-related demand destruction from the potential for widespread power outages in the U.S., but it also threatens Gulf Coast LNG export facilities.

Looking ahead, there are already indications from the longer-range weather forecast models that the first half of the 2022-23 winter may come in warmer than normal.

Lastly, gas futures are extremely overbought from a near-term and longer-term technical perspective.

Sunil Kumar Dixit, chief technical strategist at SKCharting.com, said that Wednesday’s retreat of September gas from an intraday high of $9.67 to a negative close of $9.24 was basically a reflection of “overbought Daily Stochastics with a negative overlap.”

“All the same, the weekly Stochastics continue to show bullish signs for a potential test of $10. That’s probably what’s telling the speculators that the double-digit target is really possible this time.”

Dixit said based on his chart modeling, the current uptrend in September gas required prices to sustain above $8.99.

On the physical market, $10-and-above pricing prevailed in parts of the tropics where the weather was hotter than usual, naturalgasintel.com.

The National Weather Service said dangerous hot weather would continue for the Pacific Northwest to the central valley of California. The Gulf Coast also was in store for above-average high temperatures, from East Texas to the Florida Panhandle.

Prices were higher heading east. In Louisiana, physical gas jumped 26 cents on the day to average $9.505 for next-day gas, while Transco Zone 5 ticked up only 2.0 cents but averaged even higher at $9.985.

On the West Coast, cash prices remained well above $10 despite slipping a bit in some locations. SoCal Citygate fell 4.5 cents day/day to average $12.095, while KRGT Del Pool shed a half-cent to average $11.190.

On the storage front, U.S. utilities likely added a smaller-than-usual 34 bcf per day to national inventories last week as power generators burned lots of gas to keep air conditioners humming during a heat wave, according to a Reuters poll of analysts who track the market.

That injection for the week ending August 12 compares with a build of 46 bcf during the same week a year ago and a five-year (2017-2021) average injection of 47 bcf.

The expected smaller-than-normal build came even though the ongoing shutdown of the Freeport liquefied natural gas (LNG) export plant in Texas has left lots of gas in the U.S. for utilities to inject into storage.

The Freeport facility, the second-biggest U.S. LNG export plant, was consuming about 2 bcf per day of gas before it shut on June 8.

In the week ended August 5, utilities added 44 bcf of gas to storage.

The injection analysts forecast for the week ended August 12 would lift stockpiles to 2.535 trillion cubic feet (tcf), about 12.2% below the five-year average and 9.9% below the same week a year ago.

Data from Reuters-associated data provider Refinitiv, there were around 99 cooling degree days (CDDs) last week, which was much more than the 30-year normal of 86 CDDs for the period.

CDDs, used to estimate demand to cool homes and businesses, measure the number of degrees a day's average temperature is above 65 Fahrenheit (18 Celsius).

So, other than modestly lower gas storage volumes, what DO the gas market bulls have to support such lofty prices in the midst of so many bearish drivers?

The largest gas market bulls, which are by and large likely made up of a few deep-pocketed hedge funds, have enormous investments of out-of-the-money call options located around the $8.50, $9, and $9.50 strike price levels. Presently, for the expiry months of September, October, and December there are in excess of 17,000 call options at the $9 strike price alone.

With blatant disregard for the bearish price-setting mechanisms that would normally trigger frequent sell-offs on the Henry Hub, it could be that hedge funds’ objective is to muscle prices above the $9.50s/MMBtu area in order to attempt to profitably cash in on their options positions.

However, should a contrarian hedge fund or two that smells blood in the water decide to heavily dive into the gas futures market to take the opposite direction on prices by forcing a mass liquidation of the massively long-positioned market bulls, it could result in a deep downside correction on the front-month gas futures in the relatively near-term.

“Obviously, only time will tell how this situation plays out, but it does appear that there are far more bearish catalysts now in play than there are bullish drivers at this point in time, which can’t be ignored forever.”