As this January shapes into the month when Americans may use the most heating for a winter in seven years, energy traders are grappling with the question: Will the next few natural gas drawdowns from storage by utilities be game changers for the fuel’s price? 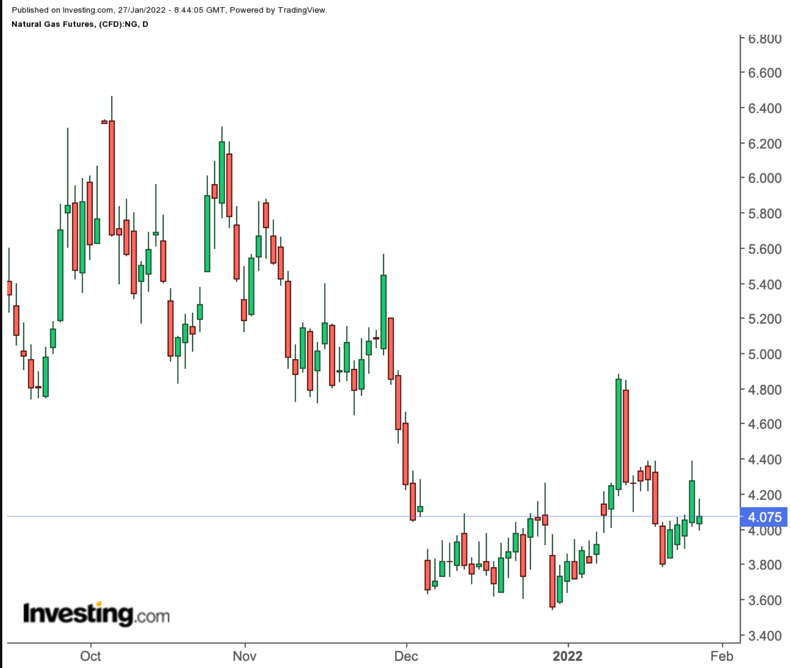 A consensus of analysts tracked by Investing.com project that utilities drew down 216 billion cubic feet (bcf) of gas from storage to burn for heating and power generation during the week ended Jan. 21.

If the analysts tracked by Investing.com are right with their projections for last week, then total gas in storage is expected to have come down to 2.594 trillion cubic feet—about 1% lower than the five-year average and 10% below the level the same week a year ago.

Last week’s usage would follow the 206 bcf that the EIA said utilities consumed during the previous week to Jan. 14.

“Next week’s withdrawal is also expected to be above 200 bcf,” Dan Myers, analyst at the Houston-based gas market consultancy Gelber & Associates wrote in a Wednesday email to the firm’s clients seen by Investing.com.

“The market, in the span of a month, will have seen storage drop from above to below the five-year average of total inventories.”

The driver behind the outsized draws and depleting storage is, of course, the freezing weather descending across much of the United States now, particularly the East Coast which accounts for the largest gas-fired heating market. 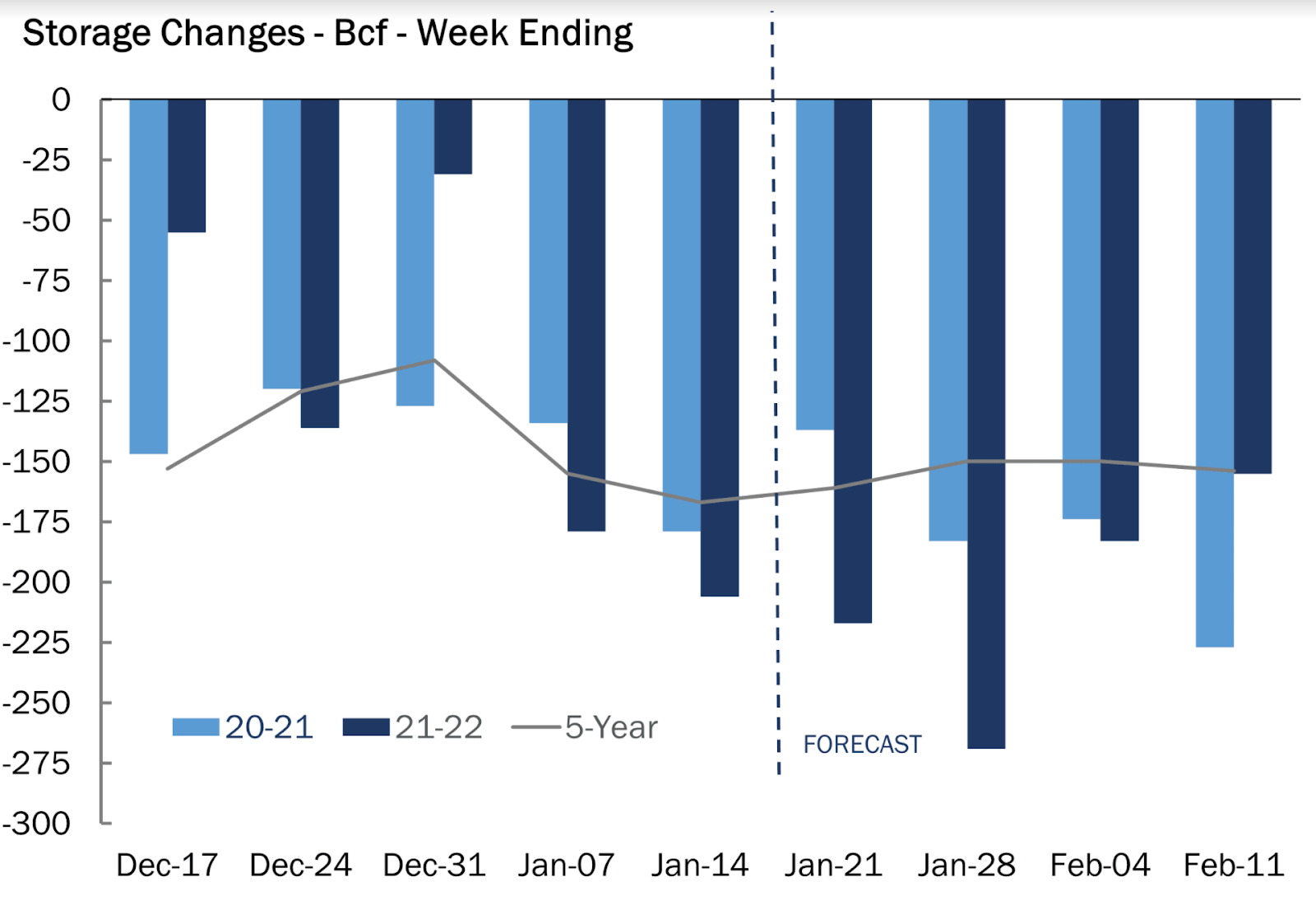 According to data provider Refinitiv, there were 218 heating degree days (HDDs) last week compared with a 30-year normal of 195 HDDs for the period.

HDDs, used to estimate demand to heat homes and businesses, measure the number of degrees a day's average temperature is below 65 degrees Fahrenheit (18 degrees Celsius).

Weekly changes to fundamentals have also accentuated the magnitude of withdrawals as drop-offs in weekly production, estimated at 1.2 bcf, and increases in exports of liquefied natural gas, predicted at 0.4 bcf per day, have widened the gap between demand and supply, Myers said.

The shifts in supply-demand—and potentially large weekly drawdowns in gas through February—could be a game changer boosting gas prices from their current holding range of $4.00-$4.30 per thermal unit.

“Drastically colder temperatures across the Midwest and Midcontinent towards the start of February, has incited the front month higher,” wrote Myers.

“Nearly 27 bcf of additional natural gas demand is expected to be realized over the next two weeks as states bulk down and prepare for the next onslaught of cold to come in.”

In Wednesday’s trade, the front-month February ​​gas futures on New York’s Henry Hub settled at $4.28—up 5.5% from the previous session and nearly 13% above its last negative close of $3.80 on Jan. 20. The contract expires in Thursday’s session, to be replaced by the March contract.

“This move effectively prices in the colder change in modeling, but the question now is whether or not there will be additional ‘panic buying’ into expiration, given what happened last February.”

Even the technical outlook for natural gas points to a rally that could run another 50 cents higher.

“If there is enough volume-led buying, the current rally may extend to $4.70, though it may also set up sideways volatility in the short term,” said Sunil Kumar Dixit, chief technical strategist at skcharting.com. Dixit added:

“The current up move remains conditioned by prices holding above $4.00, failing which horizontal support of $3.70 and $3.60 may be seen.”

EBW Analytics Group, commenting on the same trade portal, noted that Henry Hub’s expiring front-month contracts have a tendency to rally into options expiration and final settlement. It noted that over the past 14 months, the front month has increased in 10 of 14 instances over the final two trading days, logging an average gain of 17.9 cents before rolling off the board.

The trend becomes even more pronounced on final settlement day, according to EBW’s study, with the prompt month rising in 12 of the past 14 months for an average gain of 12.1 cents. Further, over the last five months, the front month has risen at least 30 cents on four occasions and more than 45 cents three times.

“While natural gas is likely to be extremely volatile, the weather-driven boost for Week 3—if sustained—may be the catalyst needed to achieve significant gains into the February final settlement,” EBW senior analyst Eli Rubin said.

Even without a significant chill lingering into next month, production—already well off earlier highs because of freeze-offs—could slide further this week if new shut-ins occur. EBW said pipeline flow monitors have pointed to declines in recent days, while the polar air set to arrive in Texas later this week sets the stage for further curbs to output in the Permian Basin.

Meanwhile, storage withdrawals have mounted in recent weeks, with a further substantial drawdown in inventories ahead. EBW noted that the steep pulls are leading to a market that is 10.0 bcf per day tighter than the five-year average over the next four EIA storage reports.