If you’re living somewhere in the US Northeast and have been wearing extra layers lately—or, worse, already cranking up the heat at home—this month’s natural gas price slump might have left you a little nonplussed. 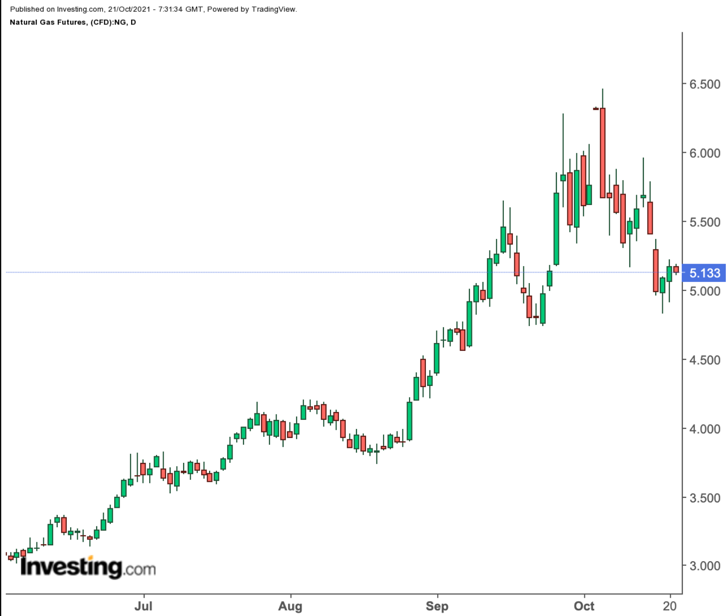 Last week might have been especially tough on those long gas as prices fell almost 3% despite the weekly build in gas storage reported by the US Energy Information Administration (EIA), coming in at almost 15% below forecast.

And while the price rebounded almost 2% on both Tuesday and Wednesday, the market was trending red again at the time of writing, showing another potential weekly loss of 5%, if it fails to spring back adequately by Friday’s close.

Since the week ended Sept. 24, gas prices have not had a positive week, with cumulative losses standing at around 8%. Truth be told, that’s not a lot, compared to swings the gas market has endured.

Also, the spot gas contract on the New York Mercantile Exchange’s Henry Hub for November, is back at near mid-$5 levels after plumbing to a one-month low below $4.83 per million metric British thermal units (mmBtu) earlier this week.

Yet, if one were to peruse weather forecasts and the potential for burns versus injections over the coming weeks, the market’s behavior may be perfectly justified, say analysts crunching numbers at the various energy consultancies across the country.

“Weather forecasts are holding steady today and continue to project that well above-normal temperatures will dominate much of the country east of the Rockies for the next two weeks,” said Dan Myers of Houston-based Gelber & Associates.

“Early hints of normal and cooler weather (and stronger heating demand) are only beginning to crop up at the tail end of the forecast, which suggests that healthy storage injections will continue into at least the first week of November.” 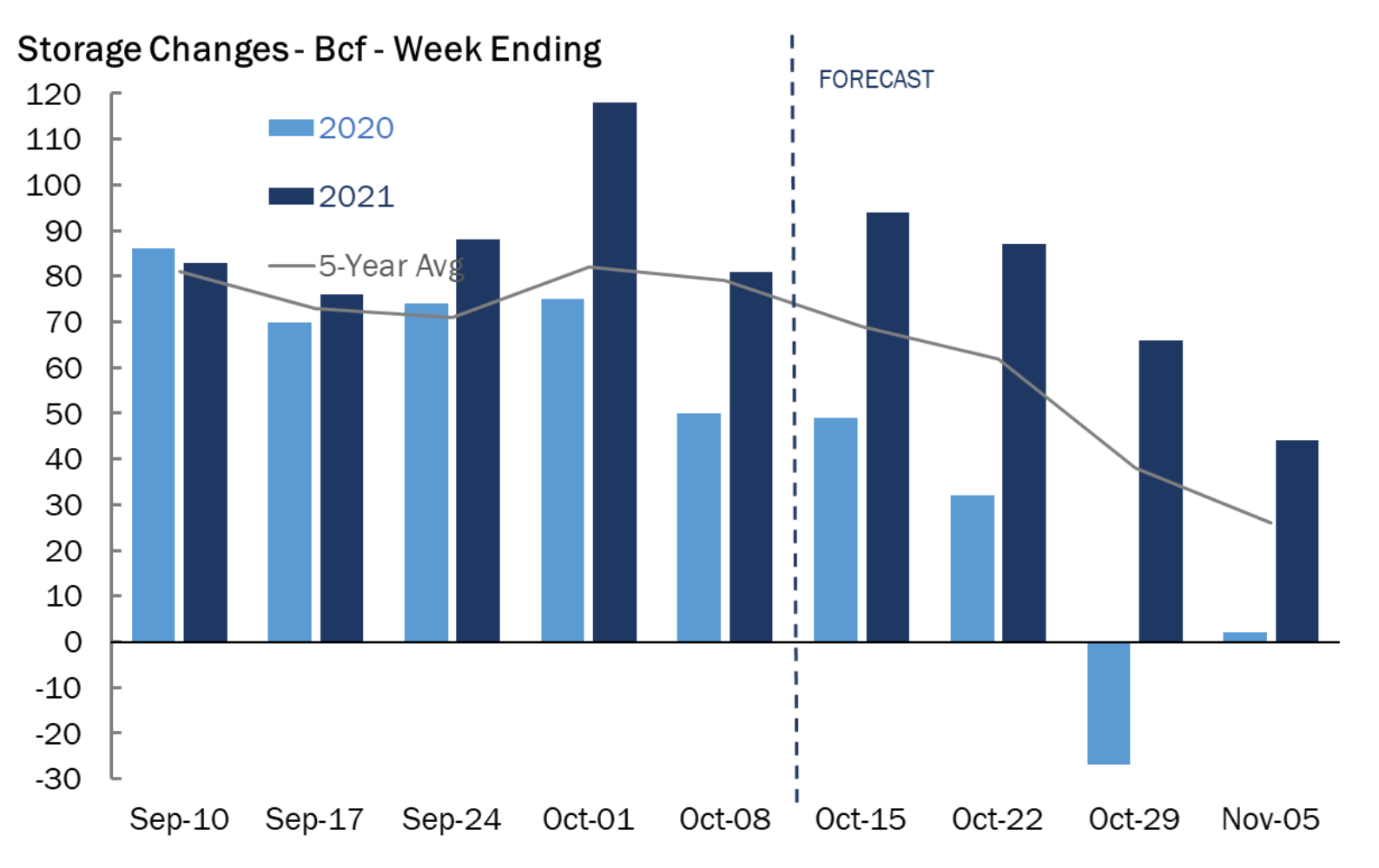 Gelber & Associates are predicting that there was a 94 bcf, or billion cubic feet injection into natural gas storage last week—much stronger than the five-year (2016-2020) average build of 69 bcf for the week.

The consensus among analysts tracked by Investing.com is that at 10:30 AM today (14:30 GMT) the EIA will report a 90-bcf injection for last week versus a 49-bcf build during the same week a year ago.

In the prior week ending Oct. 8, utilities injected 81 bcf of gas into storage, which was the fifth week in a row that utilities stockpiled more gas than usual.

As aforementioned, the EIA’s last inventory report was about 15% lower than analysts’ forecast of 94 bcf. There’s a potential for such a variance again this time, although the dynamics of weather might swing the number to the favor of gas bears—meaning the build could be even larger than forecast.

If analysts’ consensus for a 90 bcf injection is on target, total gas in stockpile would rise to 3.459 tcf, or trillion cubic feet—some 4.2% below the five-year average and 11.7% below the same week a year ago.

The estimate for a higher build comes amid last week’s milder-than-normal weather that resulted in 52 total degree days (TDDs) compared with a 30-year average of 69 TDDs for the period.

TDDs, used to estimate demand to heat or cool homes and businesses, measure the number of degrees a day's average temperature is below or above 65 degrees Fahrenheit (18 degrees Celsius).

“In upcoming weeks, we project storage increases of 87 bcf, 66 bcf, and 44 bcf from weeks between Oct. 22 and Nov. 5, respectively,” said Gelber & Associates’ Myers.

“These storage builds will continue to help inventories make up significant ground on the 5-year average, before injection-season winds down in the middle of next month.”

EBW Analytics Group agrees that a potential weather shift in the Lower 48 US states remains a “critical wildcard” for gas.

“Recent warm weather appears likely to continue into early November, but the progression of the Madden Julian Oscillation into Phases 4-5 could finally dislodge the current milder-than-normal paradigm,” naturalgasintel.com said in a report that carried EBW’s weather analysis.

While the second week of November is likely to see remnants of warmer weather from the central US to the East Coast, cooler temperatures by mid-November could dramatically shift market sentiment, according to EBW.

The firm noted that DTN, another weather forecaster, has cautioned that while model guidance on atmospheric drivers is fairly well aligned, temperature anomaly outcomes remain more bearish than analogs suggest is likely.

“If it verifies, the forecast would likely arrest declines and could reinflate Nymex winter risk premiums by early to mid-November.”

The EBW analyst team also pointed out that the importance of weather is magnified with supply and demand, which are both relatively price-inelastic in the short run. With little ability to modify natural gas demand via coal-to-gas or gas-to-coal switching near current price levels, the market is particularly exposed to any weather demand shocks heading into early winter.

“Any significant cold shot before Thanksgiving, however, could return prices toward recent highs north of $6.00/mmBtu.”

With the market firmly in the grip of shoulder-season blues—where demand for heating is typically wonky in the summer-fall-winter transition—weather-independent fundamentals have seen interesting shifts in recent days that could impact coming storage injections.

For instance, dry gas production pulled back late last week under 90 bcf daily on a variety of maintenance events in the South-Central region, although it is beginning to bounce back this week (see chart below). 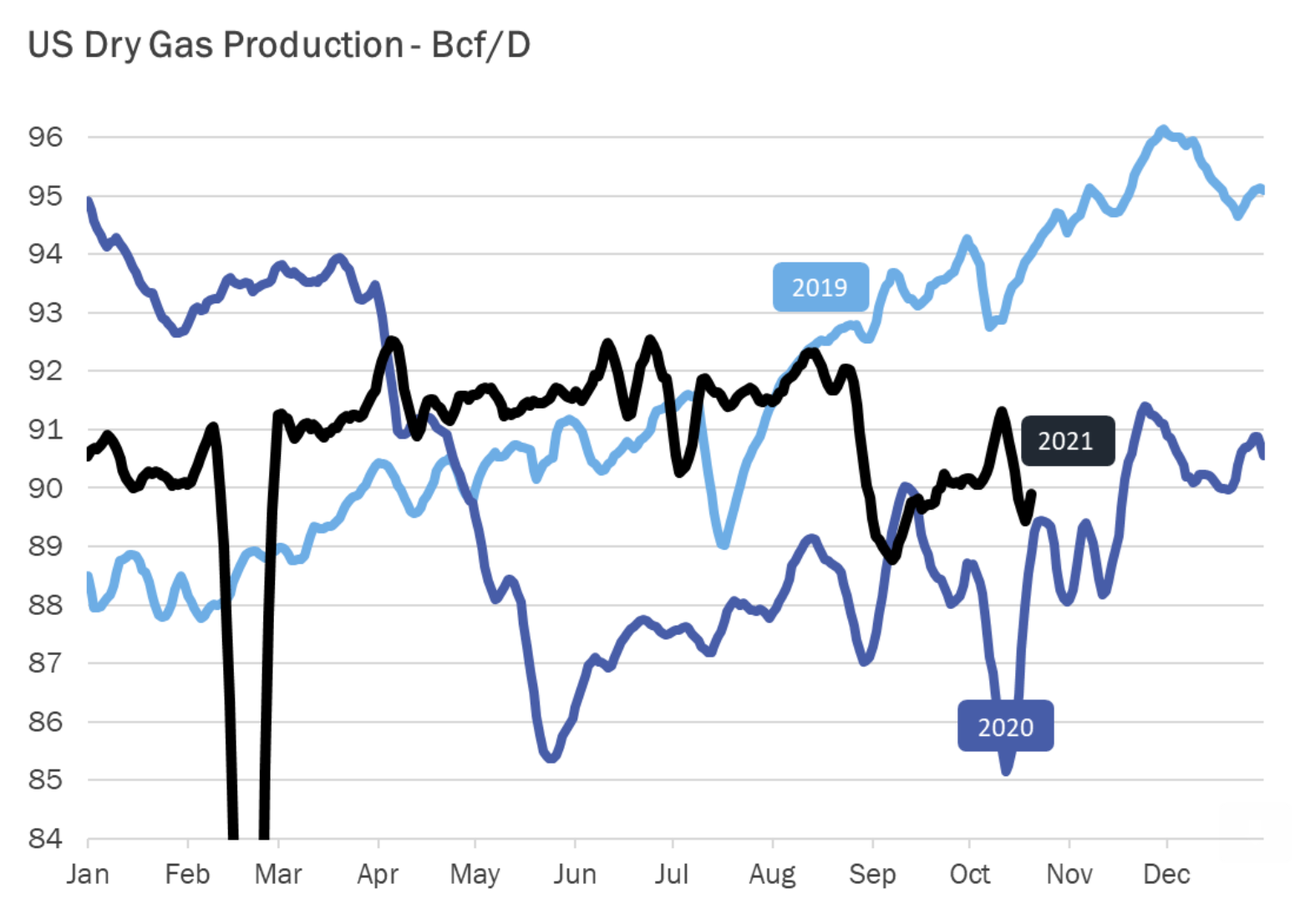 On the broader demand side, including for LNG, or liquefied natural gas, Mexican exports have found renewed vigor and returned to a seven-day average between 6-6.5 bcf daily.

LNG exports as a whole, while fluctuating day-to-day, are exiting the recent US maintenance period and trending to a steadier average near 11 bcf daily in preparation for winter.