When video-streaming giant Netflix (NASDAQ: NFLX ) releases its latest earnings later today, the focus will be on subscriber growth after a powerful pandemic-fueled boom.

Netflix, the world’s largest paid streaming service, had warned that 2021 would start slowly after record-setting growth during the previous year. The company signed up nearly 26 million new customers in the first half of 2020 as people stuck at home during the pandemic flocked to its movies and shows.

Netflix is expecting it will add just 3.5 million subscribers in the third quarter, as, amid the economic reopening, people watch less of its shows than they did last year. The strength in Netflix share price during the past quarter, however, suggests that investors are confident the California-based company will beat that number by a significant margin. 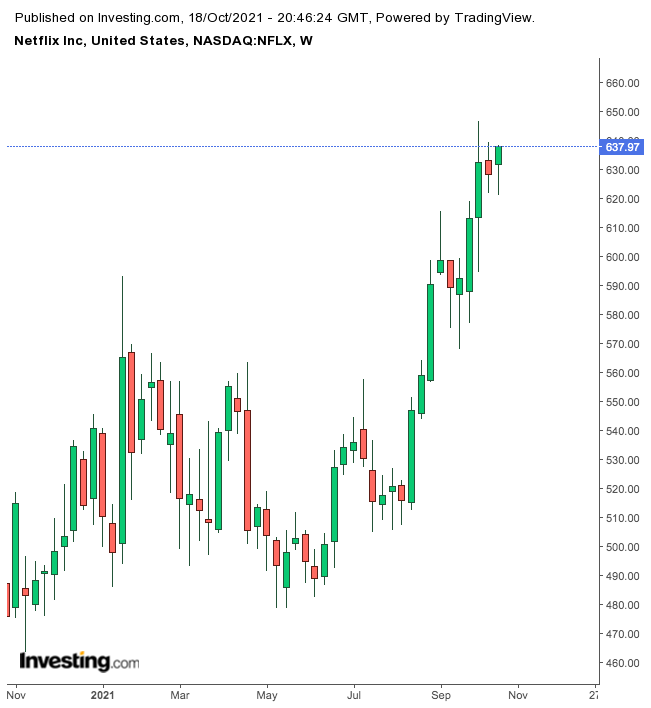 Netflix stock surged 18% in the past three months, recovering strongly from its summer weakness. Shares closed Monday at $637.97, near a record high. In comparison, the tech-heavy NASDAQ 100 Index rose just 3% during the same period.

Behind this powerful upside move are clear signs that Netflix continues to remain the most powerful streaming brand in the post-pandemic environment. The latest releases of popular titles, including new seasons of The Witcher, the South Korean hit series Squid Game, as well as the addition of Seinfeld, have shown that the appeal of Netflix will remain strong during normal times as well.

YipitData, cited by a Bloomberg report, estimated that global Netflix downloads have reached their highest levels of 2021, driven by the Asia-Pacific region in particular. About 132 million people have watched at least two minutes of Squid Game in the show’s first 23 days, smashing the Netflix record set by Bridgerton.

The success of Squid Game and other titles means that the recovery in subscribers after the pandemic boom is happening much more quickly than many analysts had expected and that should be reflected in the stock price.

“We believe that the global popularity of South Korean sourced Squid Game is indicative of the unique value proposition that Netflix brings to content creators and consumers around the world.”

Another positive development that long-term investors should take into account is that Netflix is no longer dependent on debt to fuel its growth. After years of borrowing to fund production, Netflix has said it no longer needs to raise outside financing to support day-to-day operations. The company plans to reduce debt and will buy back up to $5 billion of shares.

Netflix has solidified its cash and market position after the pandemic windfall. In addition, the company’s latest popular shows reveal that it is in a strong place from which to compete in a crowded streaming market and maintain its lead. Today’s earnings report could very well prove that point.