Global stocks were slowing down in trading on Wednesday after a strong rally on Wall Street yesterday. This suggests the market is reconsidering how to proceed after solid economic data was overshadowed by the most hawkish rhetoric from Federal Reserve Chair Jerome Powell.

The Federal Reserve boss said that the US central bank would "keep pushing" rates higher until there is evidence that inflation has cooled down. The combative tone adopted by Powell may be in response to former Fed Chair Ben Bernanke criticizing the current board for sleeping on the job.

Bernanke warned that the US might be heading into stagflation—an environment of rising prices despite a slowing economy. Bernanke was the Fed leader who championed quantitative easing and helicopter money—when a government gives cash to citizens—which was partially responsible for the highest inflation in over four decades.

All four US index futures were red with the tech-heavy NASDAQ leading the decline while the Dow outperformed.

Asian stocks were mixed. The MSCI Asia Pacific advanced for the fourth straight day along with Australia's ASX 200 which also extended gains to its fourth day. Miners listed on the Australian index recorded their best day in three weeks, leading the country's benchmark to a 1% gain, outperforming the region.

Hong Kong's Hang Seng rose 0.20% while China's Shanghai Composite dropped 0.25%, making it the only regional index in the red. Traders were concerned that government support would be inadequate to revive the virus-hit Chinese economy. In its mid-year outlook, Morgan Stanley forecasted China's growth would miss Beijing's 5.2% target.

US equities opened higher, whipsawed, and closed at or at least near session highs. Stocks sold off after Powell's comments that he would increase interest rates as much as needed without apologies.

However, investors seemed impressed with data showing that US retail sales expanded at a strong clip in April, demonstrating a resilient consumer, despite inflation and higher rates.

What made the retail data even more powerful is that it came against the backdrop of factory production rising for the third month which indicates confidence in the economy.

Treasury yields on the 10-year note slipped after jumping on Tuesday when bonds underperformed. It seems the retail sales figures had helped lure investors out of the safety of Treasuries and into higher risk stocks.

The dollar rose, capping a three-day selloff, its longest losing streak since Feb. 3. 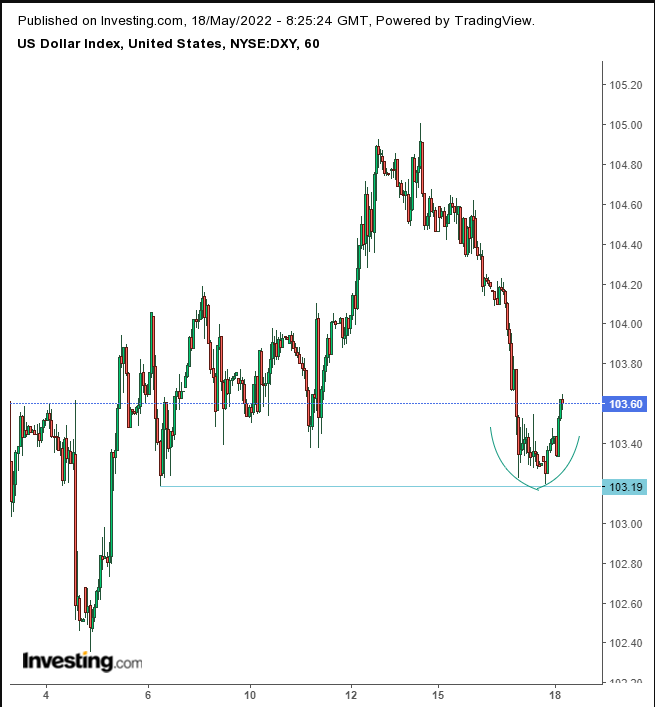 The greenback bottomed on the hourly chart, bouncing off the support of the May 6 lows. However, if the dollar falls below 103, it may complete an hourly H&S top.

Gold opened lower, giving up a two-day winning streak in its longest gain since Apr. 29. Its trading range may widen as investors remain unsure about its position as a hedge against economic and political risks. 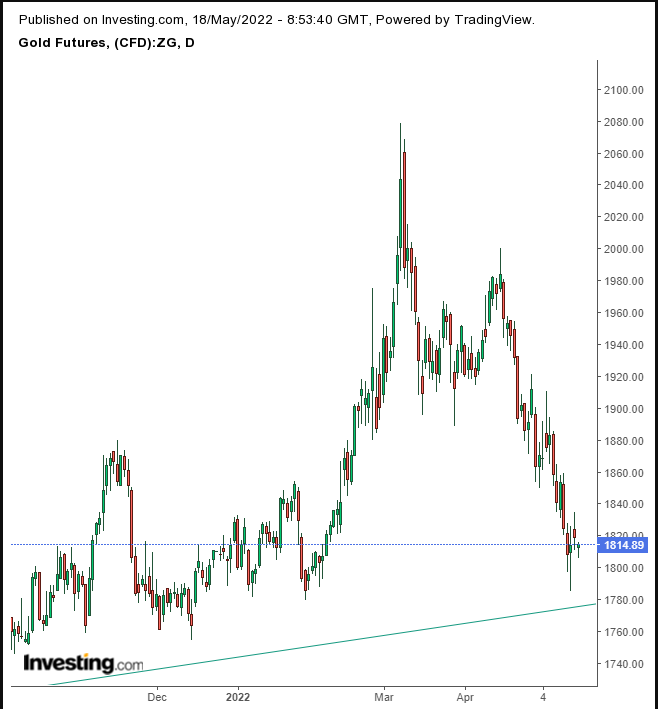 The price may retest the uptrend line since the March low.

Bitcoin erased yesterday's gains. El Salvador President Nayib Bukele is promoting the adoption of the cryptocurrency to financial representatives from 44 developing countries, despite the fact that BTC's implosion could wreak havoc on the country. 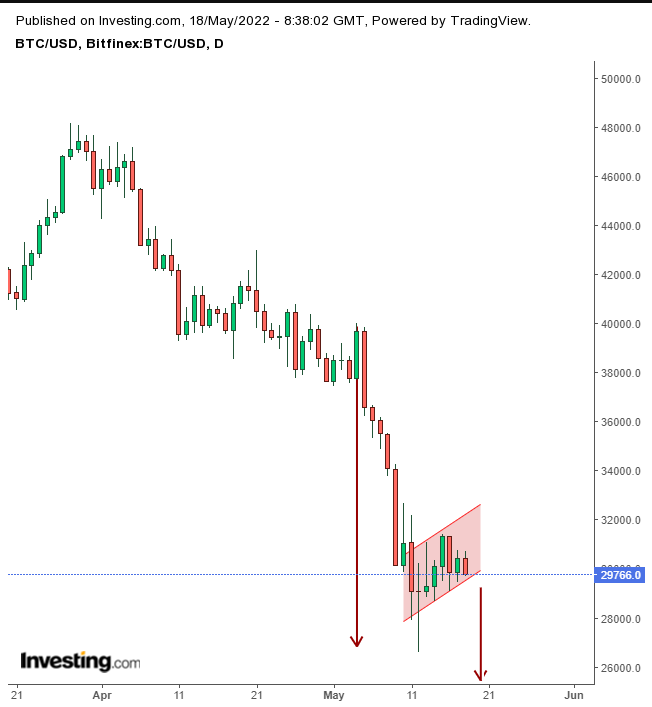 The price appears to be developing a Rising Flag, bearish after losing a third of its value in a week. A downside breakout will imply a retesting of $20K. If that decline follows through, it will trigger another bearish move.