Investing in the Canadian and Russian markets may not only be appealing for citizens of those countries. Bets on those regional assets could be beneficial for market participants beyond each country's borders.

Although many investors have a homeland bias, tending to buy equities headquartered in their own countries, established and growing stock markets in Canada, Russia other locations can offer respectable returns while adding additional diversity and limiting risk.

ETFs make investing internationally relatively accessible, simple and inexpensive. Below we address 2 ETFs to diversify into the Candian and Russian markets:

The iShares MSCI Canada ETF (NYSE: EWC ) provides exposure to large and mid-sized companies in Canada, a country with a population of around 40 million. Canada is a member of the G7, an informal grouping of seven of the world’s advanced economies as well as the world's second-largest country by total area.

Energy, mining and machinery are the backbones of exports, which account for approximately a third of Canadian gross domestic product ( GDP ). Around 80% of Canada’s trade is with the United States. 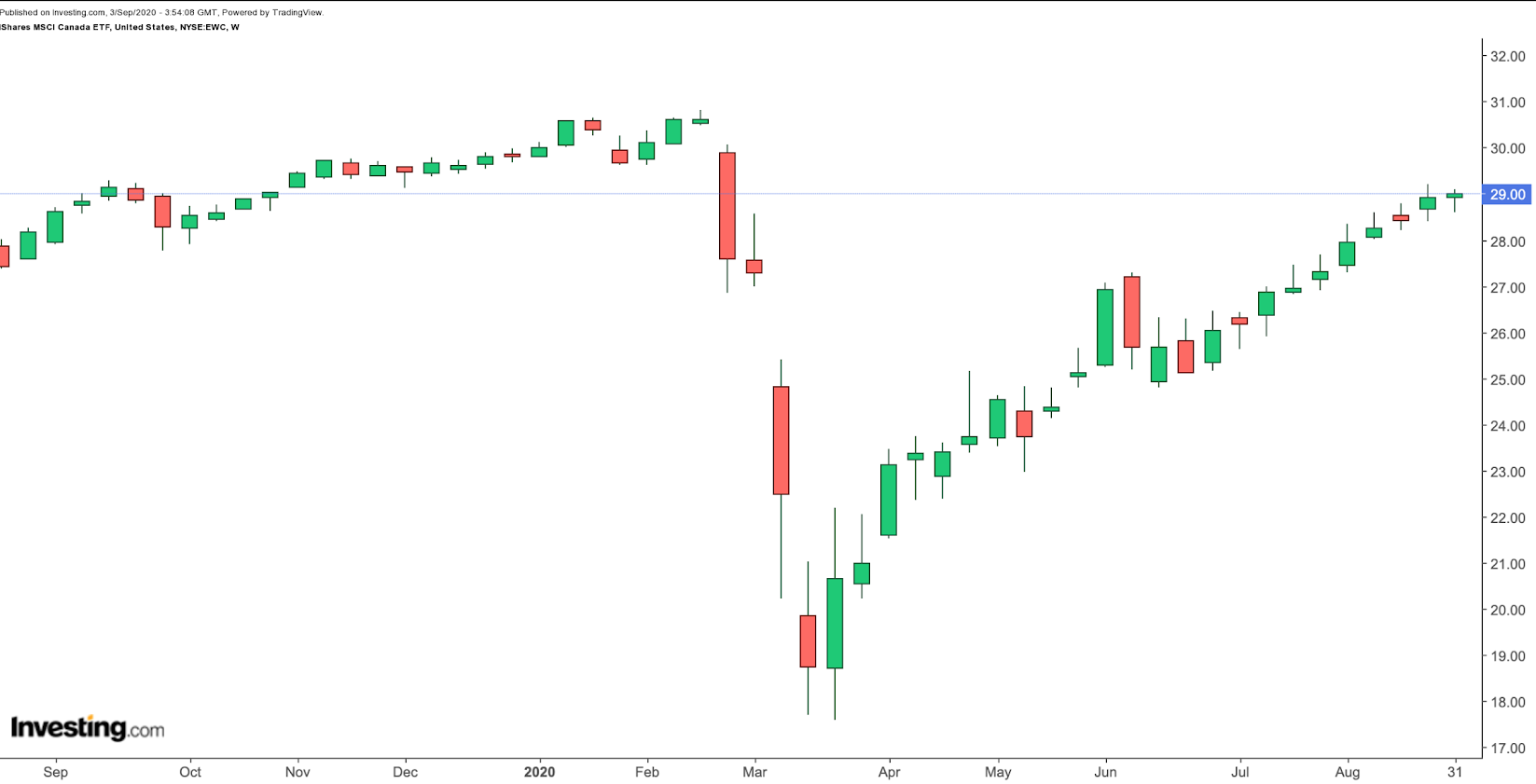 EWC, which has 85 holdings, tracks the MSCI Canada Custom Capped index. The top ten holdings comprise around 50% of EWC's net assets, which stand around $2.3 billion. The top two companies are Shopify (NYSE: SHOP ) and Royal Bank of Canada (NYSE: RY ).

In the coming months, EWC may come under pressure due to potential weakness in the financial sector and volatility in energy prices. Market participants who have benefitted from the run-up in prices since early spring may also decide to take some money off the table. New potential investors may regard a decline toward the $27.5-level and below as an opportunity to go long EWC.

The iShares MSCI Russia ETF (NYSE: ERUS ) provides exposure to a broad range of companies based in Russia, a country with a population of around 150 million. It is the world's largest country by total area. 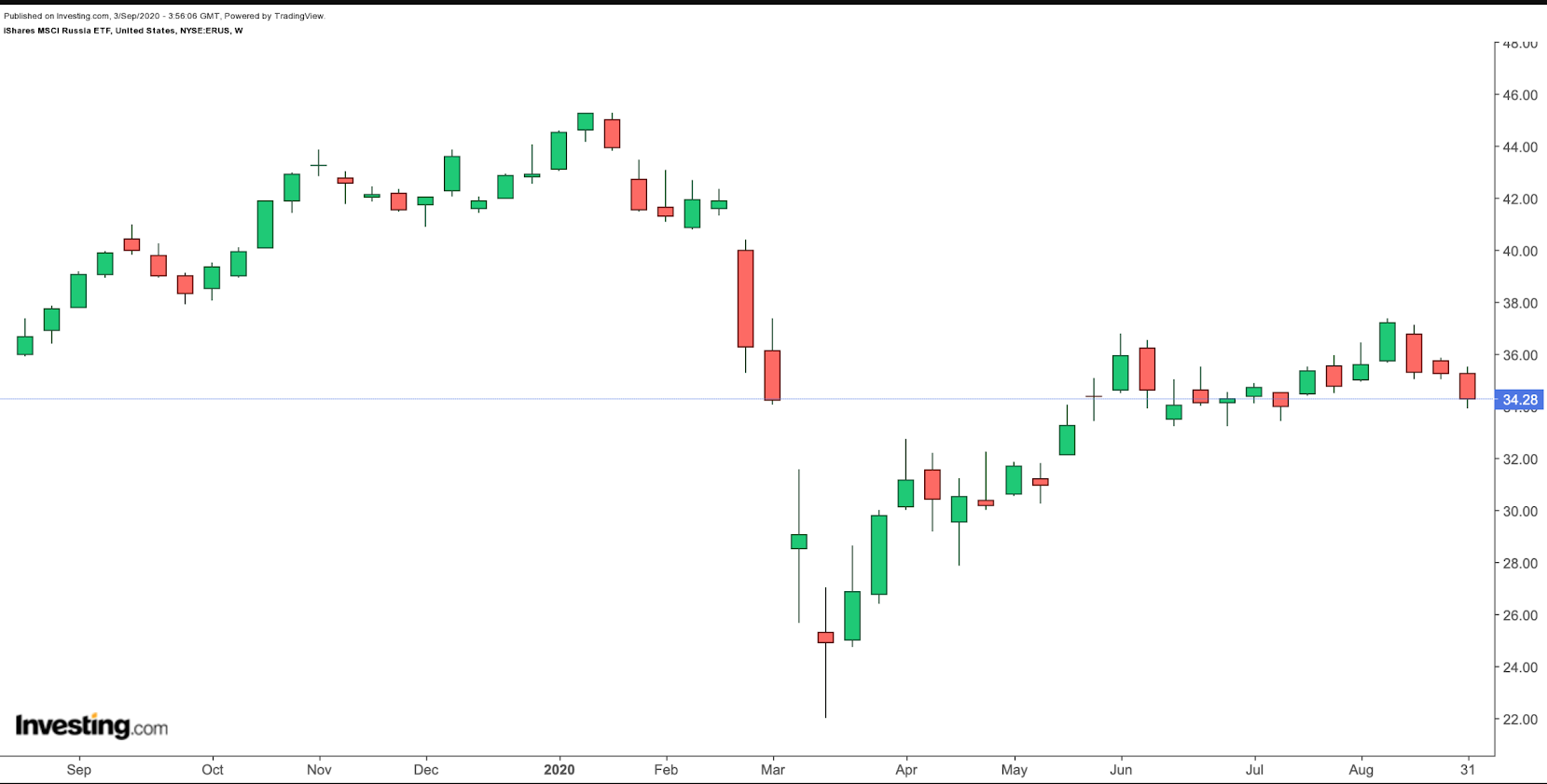 So far in the year, ERUS is down over 17%, hovering at $35. Yet it is up around 50% since the lows hit in March. The trailing P/E and P/B ratios stand at 6.52 and 0.89, respectively. The valuation, coupled with the appealing dividend yield, is likely to appeal to contrarian investors ready to look at the country's equity markets closely.

According to a recent World Bank report, Russia is headed for an economic recession. The study highlights, "The COVID-19 pandemic has resulted in reduced fiscal revenues and a weakened ruble." Furthermore, the euro area and China, Russia's top two trading partners, are also contracting, which would put pressure on Russia's export-driven economy led by gas , oil , metals, iron , steel , timber , and agricultural produce.

The immediate fundamental outlook and volatility in oil prices, coupled with possible short-term profit-taking, will likely send ERUS lower in the coming weeks. Seasoned investors would know that the Russian stock market typically has a strong correlation with the price of oil. Thus, investing in the short-run may feel like a roller-coaster run and may not be appropriate for most retail investors.

However, we believe the country offers long-term growth prospects, in part due to infrastructure improvements, transportation upgrades and various government programs that support entrepreneurship as well as foreign investment. Therefore, those with a two- to three-year horizon may consider buying the dips. Any capital gains would be complemented by generous dividend payments companies provide to shareholders.