The Pound to Rand exchange rate has stabilised above the 19.0 handle with support from a turn higher by the U.S. Dollar but would likely struggle to advance beyond the nearby 19.90 level if USD/ZAR remains contained by its 2022 high around 16.32 in the days and weeks ahead.

South Africa’s Rand was a middle of the road performer among G20 currencies during the week to Thursday after a rise in the U.S. Dollar called a halt to an earlier pullback by USD/ZAR from levels close to its 2022 highs.

“This combined with indications from the Fed that it would be difficult to orchestrate a soft landing while fighting inflation saw the rand again reject the 15,8000 support level,” de Wett added in a Thursday market commentary.

The Dollar’s drift lower from earlier in the week was halted in the Wednesday session when Federal Reserve (Fed) Chairman Jerome Powell told Congress that U.S. interest rates are likely to rise quickly in the months ahead as the bank seeks to curb inflation by slowing the economy. 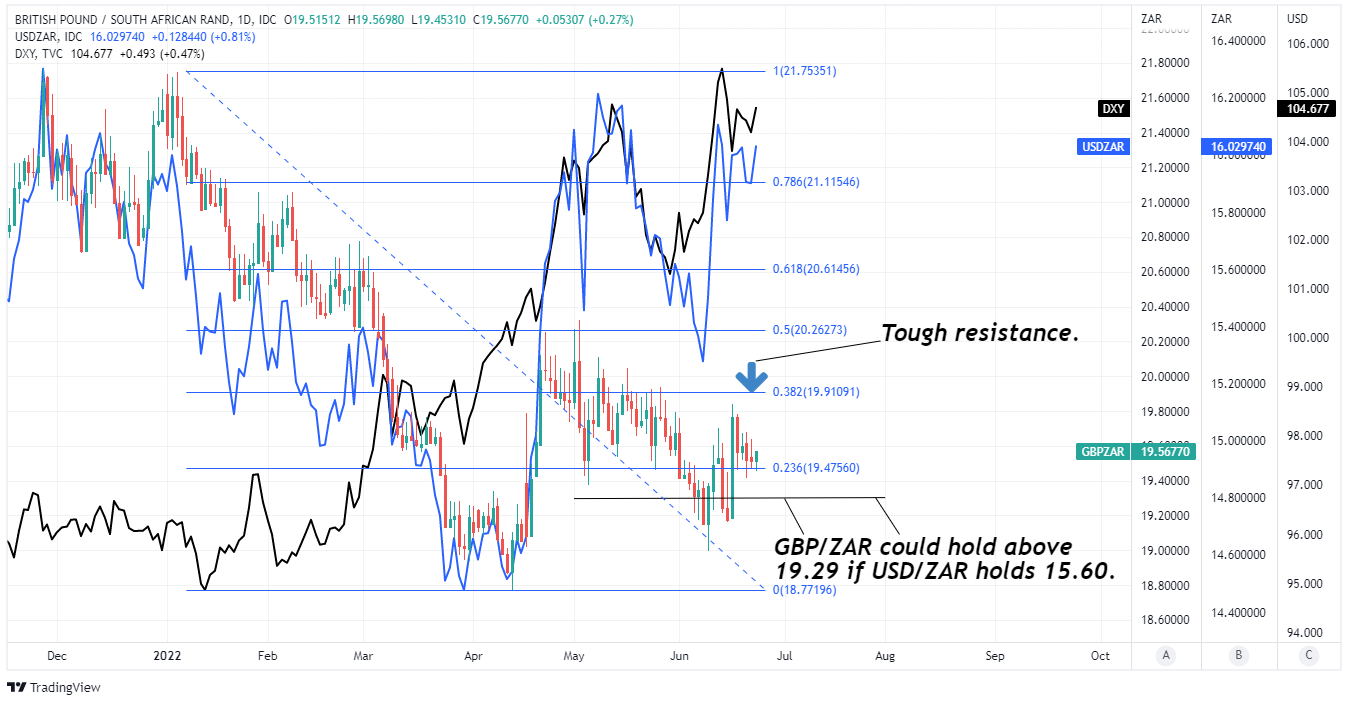 Above: Pound to Rand exchange rate at daily intervals with Fibonacci retracements of 2022 decline indicating possible areas of technical resistance for Sterling and shown alongside Dollar Index and USD/ZAR.

Chairman Powell’s remarks mostly reiterated many of the sentiments that were already expressed in last week’s policy decision press conference but his acknowledgement of recession risks and reluctance to rule out even larger interest rate steps were widely noted by analysts.

Wednesday’s Semi-annual Monetary Policy Report testimony was followed by declines in U.S. bond yields and a bid for U.S. Dollar exchange rates that helped lift GBP/ZAR , ultimately keeping it buoyant above the 19.50 level.

GBP/ZAR would likely lose its upward momentum near the 19.90 level, however, if 2022’s high in the influential USD/ZAR pair remains intact up ahead.

“The Fed is expected to continue to move aggressively this year to stamp out high inflation, and will not be adverse to causing weakness in the labour market, and in the US economy, to break the upwards shift in US wage increases, with further rand weakness the risk. The rand is currently expected to average R15.80/USD in Q3.22,” says Annabel Bishop, chief economist at Investec.

“CPI inflation came out at 6.5 y/y (0.7% m/m) in May, above the consensus estimate of 6.1% y/y (Bloomberg), and above April’s 5.9% y/y. Higher agricultural commodity price pressures saw the food price inflation rate rise to 7.8% y/y in May, contributing 0.4% to the overall 0.7% m/m lift in the CPI,” Bishop said in a review of Wednesday’s South African inflation figures. 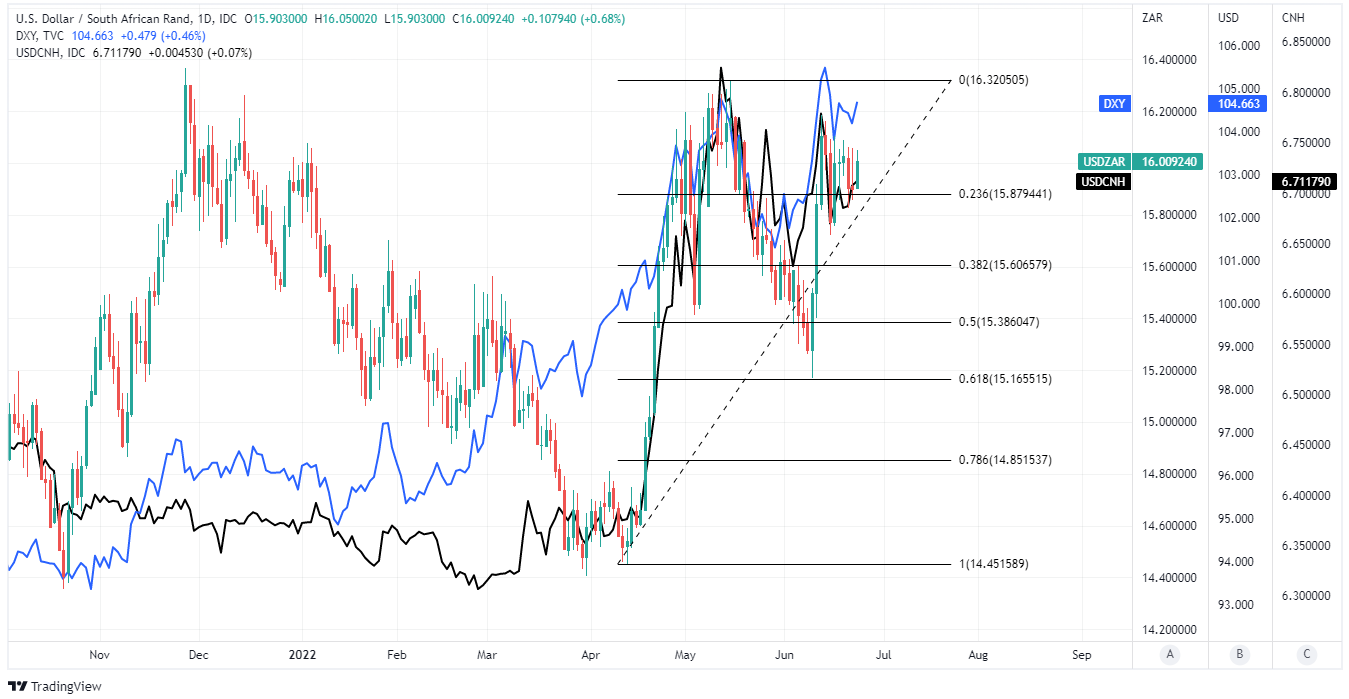 The broad bounce in Dollar exchange rates may be why the Rand was unable to capitalise on inflation figures released in South Africa on Wednesday, which showed the main inflation rate rising above the top end of the three-to-six percent target band of the South African Reserve Bank (SARB).

Core inflation, which excludes volatile food and energy prices, rose from 3.9% to 4.1% for the month of May and remained below the midpoint of the SARB target band although this wouldn’t necessarily keep the SARB from responding to the data with a further interest rate rise in July.

The core inflation rate was slightly ahead of the SARB forecast for the second quarter and emerged at a point when the Federal Reserve has recently further stepped up the pace at which it’s raising U.S. interest rates, which potentially has implications for SARB policy.

“ZAR should benefit from a more front-loaded tightening cycle from the SARB and a Chinese recovery, as they would boost its terms of trade. But the size of monetary policy tightening will be limited by still-benign growth prospects, which may further be limited by already tight financial conditions,” says Ashish Agrawal, head of emerging market macro strategy at Barclays (LON: BARC ).

The SARB lifted its cash rate by 0.50% to 4.75% in May and raised forecasts to suggest the benchmark would likely need to end the year up at 5.25% before rising to 6.25% over the course of 2023 if South African inflation is to be brought back to within the target band over the coming years.