The Pound to Rand exchange rate has sat out a rally in Sterling and would likely be at risk of slipping back toward its May lows in the days ahead if China’s Renminbi furthers a nascent rebound and if the U.S. Dollar continues to cool its heels following a lengthy advance.

Pound Sterling rose against almost all of its G20 counterparts on Tuesday but was little changed against the Rand following the release of labour market figures that showed the UK unemployment rate falling to a 50-year low and wage packets expanding at their fastest pace for decades.

The UK’s data is likely comforting for Bank of England (BoE) policymakers and was read by the market as supportive of expectations for further increases in UK interest rates later this year, hence the rally in Sterling, although GBP/ZAR already appeared to be running out of road on Tuesday.

“As we have seen so often over recent years, writing off sterling should come with a health warning,” says Chris Turner, global head of markets and regional head of research for UK & CEE at ING, who sees Tuesday’s rally by the Renminbi as having implications for other currencies too.

“Given that the sharp adjustment lower in the renminbi had hit emerging market FX and commodity currencies in general, while helping the dollar, one could now expect a very short-term reversal of those trades,” Turner and colleagues wrote in a Tuesday market commentary. Most notably for the GBP/ZAR outlook, Tuesday’s price action came amid broad corrective falls for the U.S. Dollar from recent highs and a rebound in the Renminbi that pushed USD/CNH sharply lower.

The South African Rand’s near 10% loss against the Dollar over the last month has coincided closely with the sharp upturn in the Dollar-Renminbi exchange rate, which at least appeared to be a significant contributor to the generalised Dollar strength during that time.

"The Chinese renminbi weakened sharply in the second half of April, sparking fears of a devaluation to limit downside to China’s growth. However, the weaker yuan reflects market fundamentals to a large degree, as the narrowing yield differential between China and the US has prompted portfolio outflows," says Carmen Nel, a Cape Town based strategist at Matrix Fund Managers.

The Renminbi pared back part of its recent decline on Tuesday as China’s largest city and the nerve centre of the global manufacturing industry, Shanghai, headed for a phased reopening from one of the country’s most stringent coronavirus containment efforts yet. 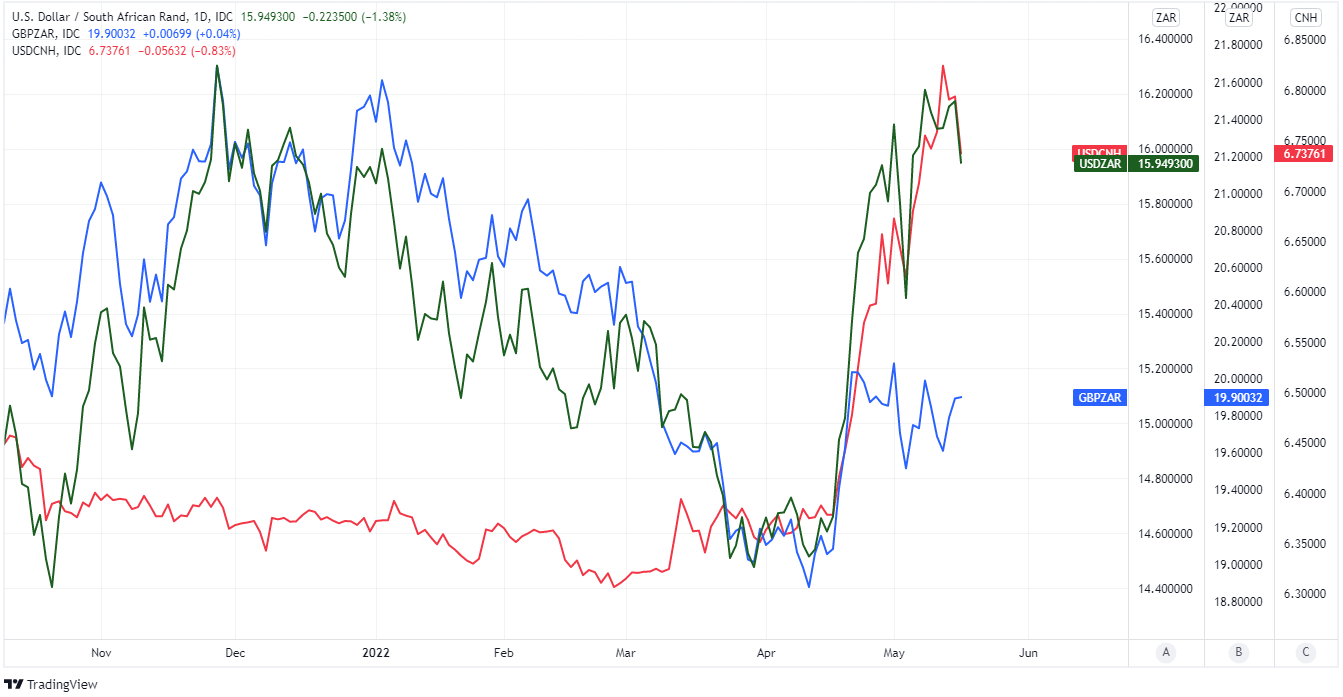 All of this has potentially bullish implications for the Rand once beyond this Thursday’s policy decision from the South African Reserve Bank (SARB), which economists and markets expect will see the cash rate lifted for a fourth time.

“South Africa’s financial markets expect a 50bp increase in the repo rate at the MPC meeting this week on Thursday, and the FRA curve has largely factored this in. Failure to deliver on market expectations would likely cause further rand weakness,” says Annabel Bishop, chief economist at Investec.

While the Rand rose strongly against the Dollar on Tuesday and was also able to keep a rallying Sterling at bay, it’s possible that the South African currency’s performance would have been stronger had it not been for the closing proximity of Thursday’s SARB decision.

But before then market expectations and the outlook for South African borrowing costs in later months are likely to be susceptible to the influence of inflation figures for April, which are set for release on Wednesday.

“The consensus view for a 50 bps hike. This is as local trade unions seek double-digit wage hikes,” de Wet and colleagues said on Tuesday.