While the revised GDP estimate from the latest benchmarking cycle reflects a significant expansion in the size of the economy, the upcoming 1Q21 and 2Q21 GDP data pose challenges from a forecasting perspective. Therefore, to estimate 2Q21 GDP growth, we consider three key practical issues. First we look at the variations between the revised and previous GDP quarterly growth estimates. Notably, in the previous dataset, seasonally adjusted real GDP grew by 1.4% q/q in 4Q20, while the revised dataset shows growth of 2.5% q/q for the same quarter. Secondly, the revised GDP dataset did not come with 1Q21 actual figures, as was the case with the previous GDP dataset, and this poses a critical challenge. Lastly, we observe that seasonal factors from the revised GDP differ slightly from the previous GDP. This also needs to be considered in the 2Q21 GDP estimate in the context of a pandemic-induced deep decline in 2Q20.

We extrapolated from the actual difference between the previous and revised levels to find the missing 1Q21 GDP data from the revised dataset. Here, we consider the average difference of levels (previous and revised) and the quarterly changes in each first quarter since 2015. This high-level method results in an implied growth outcome of 1.2% q/q for 1Q21, reflecting a significant moderation from the reported 2.5% growth outcome in 4Q201 (Figure 1).

To estimate 2Q21 GDP an assumption must be made about June 2021 mining production figures, which have not been published yet and will still not be available by next Tuesday when GDP is released. Nevertheless, our preliminary estimate is for mining production growth of 1.8% q/q in 2Q21 compared to 3.5% q/q in 1Q21. Other reliable high-frequency cyclical indicators, bar manufacturing production, show that quarterly growth momentum persisted into 2Q21. Combining the above, we therefore estimate the economy to have expanded by 0.9% q/q in 2Q21, with about 18.5% y/y growth, reflecting a solid rebound from the lockdown-induced deep decline of 16.9% in 2Q20. However, the practical issues advanced above, together with the uncertainty created by the pandemic, pose a material forecast risk.

As of 2 September, 9 203 new Covid-19 cases have been reported locally. The seven-day moving average of infections stood at 8 776, reflecting a 25.4% w/w decline. Cases declined across all provinces, with the seven-day moving average of infections in Gauteng and the Western Cape declining by 36.2% w/w and 35.4% w/w respectively. Notably, KZN, which had become the epicentre, saw a decline of 25.3% w/w, from an increase of 13.2% in the same period last week. The total number of new cases in August stood at 330 266, down from 473 421 in July – a decline of 30.2% m/m. This suggests that July represented the peak of the third wave of Covid-19 infections. However, scientists are predicting the fourth wave before year end. The improved procurement and distribution of vaccines is encouraging, although vaccine hesitancy remains a worrying factor.

Globally, the Delta variant remain a concern, with a growing number of countries forced to impose tighter lockdown restrictions that are stifling economic activity and disrupting supply chains. These factors feed into higher prices and weigh on economic recovery, as evidenced by a number of high-frequency data releases. Nevertheless, this is unlikely to completely derail activity since global economies are becoming increasingly capable of limiting the economic impact of the virus. Rather, we are of the view that this dampens expectations on the strength and speed of the global economic recovery. 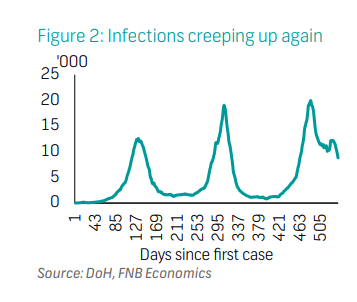 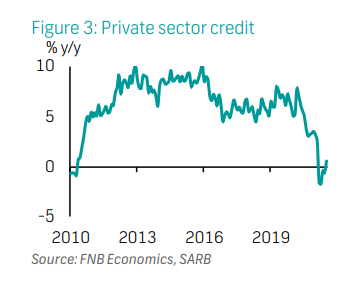 The trade balance narrows in July 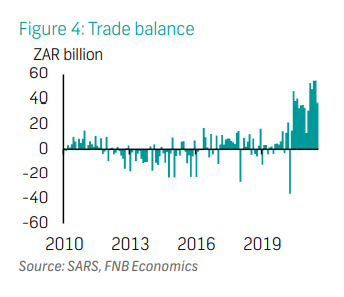 Domestic vehicle sales recovered from the economic disruptions caused by the unrest in July 2021, recording 24.6% y/y in August, from 1.7% in the previous month. Nevertheless, the knock-on effects of the disruptions, as well as the cyberattack on Transnet operations, were still visible on vehicle exports with a decline of 15.6% y/y in August, following a decline of 35.8% in July. Despite the large drop in exports, yearto-date figures were still 36.3% higher than a year earlier. This shows that improved mobility and rebounding trading partner growth continued to support exports, although this is beginning to slow as several major economies battle with the Delta variant. 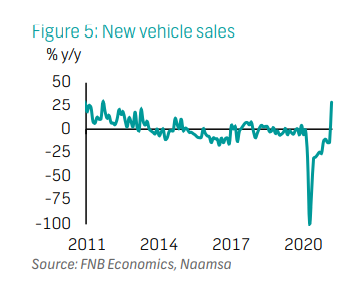 Following a steep decline induced by the social unrest, the PMI bounced back in August, recording 57.9 points from 43.5 points in July. The recovery was supported by a normalisation of demand and output for businesses affected by the looting in July as well as a further boost from less strict lockdown restrictions. This saw both the business activity and new sales order indices returning to levels slightly above those seen in June. Looking ahead, however, respondents turned less optimistic about near-term business conditions. Renewed concerns about the strength of the global economic recovery amid the spread of the Covid-19 Delta variant and rising production cost pressures due to higher fuel and input prices may have contributed to this decline. 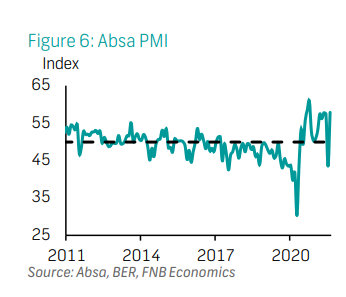 Latest trends in the electricity, gas and water industry

Electricity production (not seasonally adjusted) grew by 3.5% y/y in July, following growth of 3.2% y/y in June. On a month-on-month basis, seasonally adjusted electricity production grew by 0.7% after contracting by 1.4% in June, indicating a good start in 3Q21 for the industry. On the demand side, electricity consumption grew by 2.9% y/y in July and by 2.0% m/m seasonally adjusted. Stats SA recently published 2019 survey results for the electricity, gas and water industry. The survey is generally conducted every three to five years and covers trends in production, employment, energy mix, income and expenditure. Crucially, the survey results indicated that in 2019 the industry produced less electricity relative to 2010 and 2013. The industry’s employment level peaked at 58 485 in 2013 and was estimated at 55 796 in 2019, reflecting employment reduction in electricity generation while water supply and gas supply saw employment gains. South Africa’s energy mix is gradually shifting away from coal, and renewable energy is taking up more of the energy mix, accounting for 4.9% in 2019 compared to 0.4% in 2013. In 2019 the industry consumed 531 million litres of diesel to generate electricity, reflecting a significant reduction from 1 336 million litres in 2016. Although gradually falling, at 87.2% in 2019 (compared to 88.8% in 2016), coal still accounts for a large share of the industry’s energy mix.

On Tuesday foreign exchange reserves data for August will be published. South Africa’s foreign exchange reserves declined to $54.46 billion in July, from $54.47 billion in June. Movements in gross reserves and the international liquidity position were mainly on a higher US dollar-denominated gold price, valuation adjustments driven by asset price and currency movements, as well as an increase in the forward position and foreign payments made on behalf of government.

The Consumer Confidence Index (CCI) for 3Q21 will also be published on Tuesday. Consumer confidence faltered in 2Q21. After recovering to -9 index points during 1Q21, from -12 index points in 4Q20, consumer confidence backpedalled to -13 in 2Q21. The latest reading was well below the long-term average of +2 since 1994 and reflected very depressed consumer confidence levels, albeit less negative compared to the extraordinarily pessimistic readings of -33 and -23 recorded during the second and third quarters of 2020 (when severe pandemic-induced economic restrictions were implemented). A breakdown of the CCI per household income group showed a collapse in consumer sentiment among low-income households, which crashed from a neutral level in the first quarter to deep into negative territory during the second quarter. 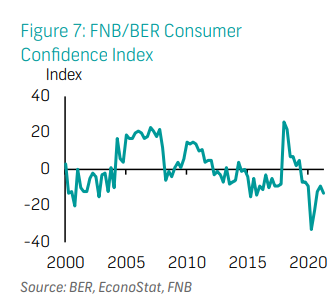 Current account data for 2Q21 will be published on Thursday. In 1Q21 the current account recorded a historically large surplus of R267 billion, up from R198 billion in 4Q20. As a percentage of GDP, the current account stood at 5.0% in 1Q21 from 3.1% in the prior quarter. The trade balance reflected a surplus supported by terms of trade gains, as the value of exports increased on elevated commodity prices. While export gains were on value increases, imports increased in volume terms. The services, income and current transfer account recorded a lesser shortfall of R163 billion vs R227 billion in 4Q20 (3.1% of GDP vs 4.2%), on smaller deficits in services and primary income. Current account data should also be revised in the September SARB Quarterly Bulletin, following the recent GDP benchmarking exercise. 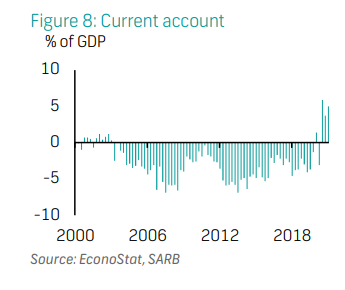 The Business Confidence Index for 3Q21 will also be published on Thursday. After declining by 5 index points in 1Q21, business confidence jumped by 15 index points to 50 in 2Q21, clearing its pre-pandemic levels. Encouragingly, the improvement was broad-based, although uneven across sectors. For example, it rose sharply in the manufacturing, retail trade and motor trade sectors, but only marginally among building contractors and the wholesale trade sector. The 3Q21 survey outcome should potentially reflect the impact of the recent adjusted level 4 lockdown restrictions as well as the effect the civil unrest had on confidence. 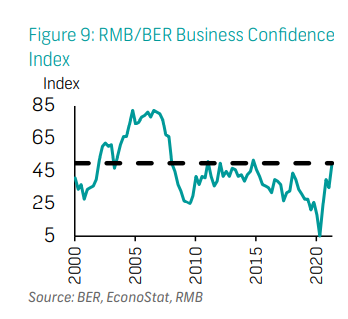 Also on Thursday, manufacturing production data for July will be published. Total manufacturing output grew by 12.5% y/y in June, reflecting a moderation from an upwardly revised 36.3% y/y (previously: 35.3% y/y) in May as the impact of last year’s pandemic-induced low base diminished. Manufacturing output was up by 16.4% in 1H21 compared to 1H20, but down by 4.0% compared to 1H19, broadly reflecting a steady but incomplete recovery. Seasonally adjusted manufacturing output, critical for the official calculation of quarterly GDP growth, contracted by 0.7% m/m in June after contracting sharply by 2.0% m/m (upwardly revised from a contraction of 2.6% m/m) in May. Electricity shortages, the impact of the recent unrest, and the projected fourth wave of Covid-19 infections before year end could disrupt production going forward. 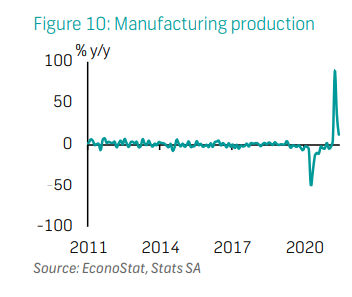