The last quarter has turned into an absolute firestorm, and investors are not sure where to turn next!

At what is meant to be one of the best moment for retailers, the economy and business in general, the whole world seemed to momentarily stop as news spread like wildfire from SA on Friday.

Once again, South Africa was in the global spotlight for all the wrong reasons, amidst reports of a new 'variant' being 'discovered' locally rattled the markets.

What had been a poor week for the ZAR turned into an absolute fiasco, as the Rand crashed to worst levels for the year against the Dollar and Pound, and lost huge ground to the Euro.

Is the chaos of devastating global lockdowns going to take hold of the world all over again as governments arbitrarily shut down travel, business and more?

One thing is clear, investors are fearing the worst. The thought of another damaging lockdown (which has been proven to be ineffective) is enough to make any economy shudder.

But let's start with a full review of the week, and take some forward looks into the days ahead.

And so the week began, and all eyes were already on the end of the week with all of the retail action on Thanksgiving, Black Friday and then Cyber Monday.

Investors and market traders were looking to see if another holiday season with less restrictions could stimulate economies again and give them the boost they needed heading into the end of year.

A great holiday season would undoubtedly help positive sentiment for everyone.

And boy, was the Rand in need of positive sentiment heading into this week, as it opened in the R15.60s!

Already at the worst levels of 2021, everyone was hoping for a change in the trend. We were expecting things to be a bit different, with more Rand weakness before we would get a clearer indication on how the next few weeks would go.

As the Rand continued to weaken through the week until we were in touching distance of R16/$ on Wednesday afternoon, we then issued another update showing potential to move higher toward R16.20 to the Dollar.

Following that, we saw the market pullback some ground as per our prediction from Friday, getting to the low R15.80s by Thursday afternoon.

But this was when things really started to fall apart!

Europe was already shaky following spiralling cases over the last few weeks, as a supposed 4th wave of the 'pandemic' was hitting them...had investors on high alert.

And then on Friday, things got really crazy.

A new supposed new 'variant' which the WHO claimed had 'mutated' from the original strain had been found in SA, but now with cases in Botswana, Israel, Hong Kong and Belgium. (Of course, they don't say how this supposed 'new variant' was detected or how new cases are detected - based on what test? Where is the science?)

Nations went into panic mode. EU and the US imposed travel bans on Southern African nations, as the number rose to more than 20 countries by Friday evening. Expect that number to continue to grow.

And then there was the markets: 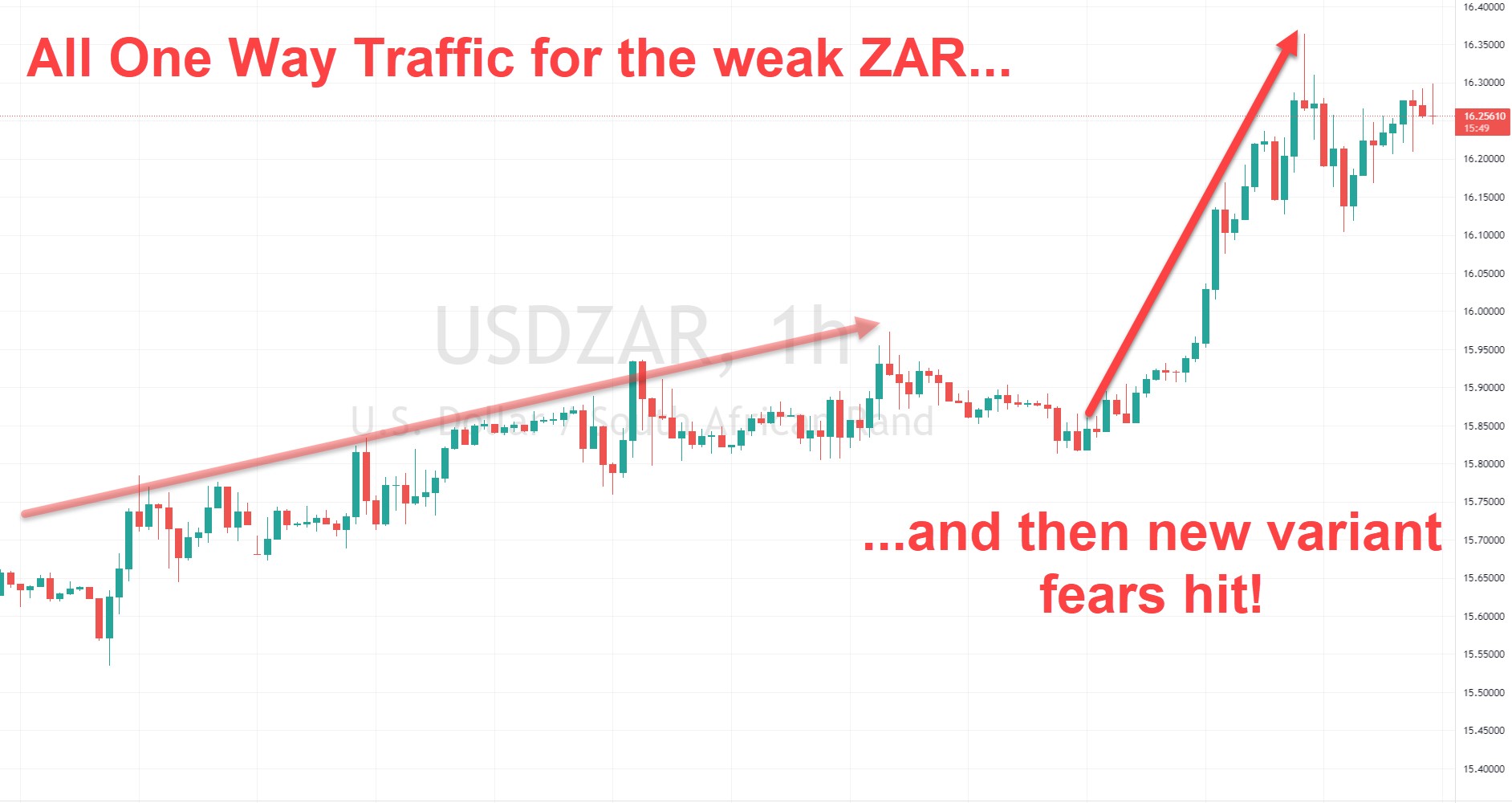 Stock markets took a big tumble. As did Crypto. Oil was hit very badly, losing more than 10%. Even Gold had a rough time, but managed to hold its ground. The Dollar Index crashed lower, showing the fear that was gripping investors worldwide.

While it all feels very premature and without solid facts backing up all these decisions, it proves the irrational, emotional and fear-greed driven approach to markets, that persons can so quickly be swayed one way or the other.

The reality is that another massive worldwide ripple effect of draconian government lockdowns would be nothing short of disastrous for the global economy, which cannot take another end of the year like 2020 was, so what next?

Right now, the landscape looks rather a mess. No one knows what tomorrow holds, and expect the volatility of markets to continue.

The one thing we can offer as a guiding hand in times like these is an outlook on where we see markets going. The Elliott Wave based forecasting system we use and have developed is not perfect, but it has held its own even in crazy times like these.

This move of the Rand weaker has validated longer term outlooks that we have issued back in October, July and even March 2020's outlook for the next few years is holding true.

The Elliott Wave Principle is an amazing study of human emotion in the markets, and we have found it to hold true even in times of great uncertainty and volatility.

Getting back to the Rand, we saw the markets pull back just a little before the close on Friday, but the damage had been done.

The Rand now sat on the ropes, more than 60c weaker during the course of the 5 days against all 3 majors and that is the wrap for now...phew!

Who knows what to say for the week ahead.

Days ahead are looking more uncertain than ever, and right now, our expectation would be that news coming out over the days ahead of possible lockdowns will probably overshadow any economic news.

The biggest risk facing the markets would not seem to be any further spreading of a 'variant', but more how governments will react.

Will the same overreaching irrational decisions be made at the expense of business and normal life, impinging on the basic human rights and liberties (for a virus that is proven to be treatable and has a flu-like mortality rate)?

Regardless, here are the events we are watching for triggers over the coming days:

Once again, we will be watching some key levels to confirm our most probable outlook for the days and weeks going into the yearend.