Another week, another win for the local currency, as the Rand turned the tables on the Dollar.

A most unusual few days one has to say, as the Dollar actually recovered as a whole against the majors - but the Rand did not follow suit, driving home it's advantage towards R14 to the USD.

We had some good local economic data to drive the news, but it was really a waiting game as we watched for the next breakout.

With the Rand, you know that volatility is never far away.

Let's get into the full review as we watch with anticipation as to the Rand's movements this week!

Here were the biggest talking points from the 5 days:

So to begin with the local unit, we opened around R14.25 to the Dollar.

Following the horrific US Jobs report, many were hoping for the ZAR to further push home its advantage and head lower toward R14 - while exporters were anxiously looking for a turnaround.

But what we saw from the Dollar was quite a different story - as the chief reserve currency actually strengthened against the basket of currencies, as the Dollar Index moved back upward of 92 points, and toward 93.

This Dollar Index is really an overall measurement of Dollar strength - and a key indicator as to what the coming years hold for the staple world currency. We actually provide predictions on this over on our sister platform, Dynamic Forex Solutions over here. If you have exposure to Dollar in your investment decisions, this could be of interest to you.

But to get back to the Rand, the interesting thing about this week was that we saw the Dollar Index make up ground - and yet the Rand continue to push stronger.

It was not a week of massive swings in currency value, but still, we saw the Rand moving ever closer toward that R14 level, eventually hitting R14.05 on Friday afternoon!

Yet through the week, what we saw was the Dollar gaining ground against the basket of currencies.

It was a strange thing to see - but confirmation that the Rand actually had some strength of its own, and was its own animal, not just moving with the tide but fighting against it.

There were some triggers locally that were involved with this, such as SA's GDP coming in better than expected at a 1.2% gain in Q2. This followed a revised 1.0% rise in Q1, meaning SA was sitting 2.2% in the green during 2021 - not nearly the growth required after the losses, but better than being in the red, following more government lockdowns through the year.

The most interesting turn of events, one would have to say!

And the Rand loved it: 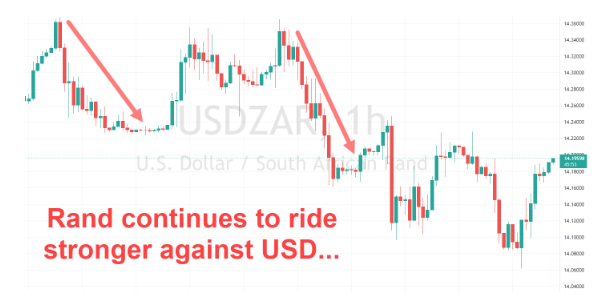 And then we had in other news:

And to get back to the local unit, now the best performing emerging currency market in 2021, we saw the eventual end of SA trade around R14.15/$.

A week where the local unit dominated and gained some ground once again, but what do the next few days hold?

As we look to the week ahead, there are a few events to keep an eye on as we look for triggers, but overall it should be a quieter few days until we approach the end of the month economic events.

Here are the few events we are watching this week:

As for the Rand, it has had a considerable good run, but with signs of waning momentum, it could be that the tides may be turning, and we will be watching some key levels on our updated forecasts to confirm this.

We can expect an interesting few days ahead of us.