What a start for the Rand so far this year, defying expectations for an explosive start to the new year, and roaring back to sub R15.30 levels.

And locals will be hoping this trend can continue, as right now it looks like January is already slated to be a month 'in the green'.

So let's try do some catchup on the last few days, and then give some idea of our views for the remainder of this year.

Before we begin, these were the biggest headlines from the 5 days, with a lot of focus being on US Policies and economic figures:

And so to get back to the Rand, we had opened the year just a touch below R16 to the Dollar, and the early stages were a little shaky, but from there, it has largely been plain sailing.

We saw the market track down to begin this week right around R15.50, a significant improvement already.

When the uncertainty of these last few years has largely left the Rand on the back foot, it is a welcome change when we see the local unit pullback despite the volatility in the markets.

And this week there was hopes of more of the same - especially as the US showed increasing uncertain signs in it's economy.

The biggest cause for concern was the inflation rate, as December's figures came out showing a 7% increase year on year. This is now the biggest increase since December of 1982. Excluding food and energy, the core CPI was 5.5% in the year, which was the biggest growth since 1991.

This is a serious concern for the Biden administration, as their best efforts to control inflation seem to be having little to no effect.

At the same time, jobless claims continue to be a little uncertain, despite the decrease of the unemployment rate - which now sits at a highly impressive 3.9%.

The months ahead are going to be critical to see whether there can be a hold placed on inflation, as consumers are starting to get angry with the results they are seeing of the administration's decision making...

But as for the Rand, it continues to ride the wave of this news, and continued to do so through the week, as it pushed stronger to the Dollar: 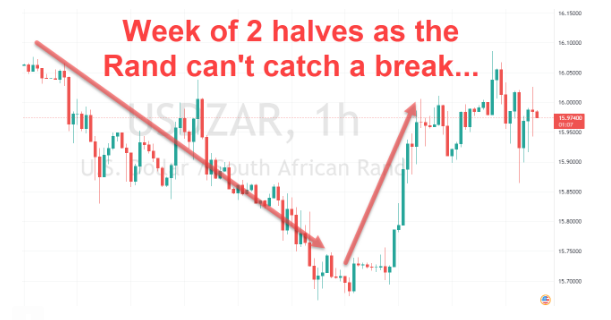 It has been a dream start to the year, and now it is a question of whether that momentum can be maintained.

And on that note, we have done some extensive work in updating a lot of our long term outlooks for the USDZAR , EURZAR and GBPZAR - giving the complete picture now for the days, weeks, months and years ahead. If these are markets that affect your business exposure, your import or export decisions, your investment planning or trades you plan on making, it may well be worth your while looking at our trial...

You can get started over here

Getting back to the local unit, we saw the ZAR make further inroads through the week, breaking below R15.50, and touching nearer R15.25 to the Dollar! These are now the strongest levels since November last year, and are a welcome breath of fresh air for consumers who are looking for some respite.

So as we look to the days ahead, there are some important events coming up and locally, one of the biggest is the SARB monetary policy meeting which is scheduled for 25 January, where discussions will most likely focus on a rate hike.

Analysts expect inflation to rise again during the first quarter of the year due to supply chain concerns as well as international rising food prices (not to mention the hike in electricity and fuel prices in South Africa).

Inflation pressure may dominate the agenda at the policy meeting, which in turn will drive the inflation rate prospects for this year. The expectation is for a rate hike...but we will have to see!

As for this next week, these are the events we are watching:

So pretty limited, but we know that triggers for the market are often not ones that are planned, such as economic releases!

Once again, we will be shutting out all the noise and focusing on what the chart wave structures and cycles are telling us - and watching some key levels to confirm our most probable outlook for the days and weeks going into yearend.