Rand volatility continues, but the trend at the moment is all one way.

Despite the rioting and looting stopping, the Rand has not fared very well at all.

Factually, the long term effects of the destruction caused mainly in Kwa-Zulu Natal and Gauteng will be felt for a long time.

For now, it looks like supply chains are only just managing to keep afloat, so that extreme shortages are not widespread across the country.

But effects on GDP are already being seen, with the full effects on the economy still to be seen.

So what does the future hold for the Rand?

Before the week began, we issued our Short Term Forecast for the Rand/Dollar on Friday the 16th of July, showing a clear outlook for the days ahead. With the market at R14.40, our view was that we would see the market bottom out and head higher (weaker Rand) over the coming days, with a break above R14.61 confirming further upside

It was going to be an interesting week of patterns to watch, as the country unwound from a frantic previous few days.

And these were the biggest headlines:

Ramaphosa's Response - or non-response…many were very disappointed in the lack of action and accountability, as the nation was left to fend for itself. Citizens made themselves heard.

Metros On The Ropes - part of the stimulation for the rioting is the lack of service delivery, government corruption and more, which has now left the metros on the verge of collapse

US Recovery - while things are moving back toward normality, the US just cannot seem to shake jobless claims and payroll disappointments...

Interest Rates - SA's decision during the week, and the US's soon to follow...how with the different Reserve Banks react?

And so the Rand opened around R14.36, as the week began with an eerie silence compared to the previous week of looting and chaos.

Cleanups were in full swing, as local citizens worked and tried to regain some normality to their cities again.

There was anger amongst the looters, but too amongst the citizens following this ordeal. Ramaphosa had failed hopelessly in managing the situation, reacting with too little, too late.

The damage had been done.

Considering how efficient the army deployment was for the crackdown at the start of lockdown, it seems ironic that when the country is burning, it took that long to get the military involved.

And that really raises questions around agendas - and what really matters to the ANC, as 40,000 businesses have been affected by the rioting.

In an amazing, blunt and scathing open letter to Ramaphosa, an anonymous source penned their thoughts to the President in a piece that went viral across the country. It is well worth a read.

Will it bring change?

That is doubtful. But it gives insight into how persons are feeling.

And the problem doesn't only lie at the top of the pile, as more and more bad news continued to pour out from local SA metros, who were on the bring of collapse.

Moody's downgraded them to junk status, and this even included City of Cape Town, despite it being one of the best run in the country.

As the local government elections draw closer, the finances of South Africa's 257 municipalities are expected to come under keen focus.

In the latest report, Moody's said rating downgrades reflect rising liquidity pressure "as a result of material shortfalls in revenue collection" in the context of very weak growth.

All these issues contribute back to citizen frustration. What is the solution?

Getting back to the Rand, these woes took their toll on the local unit, as we saw a one way trend throughout the week: 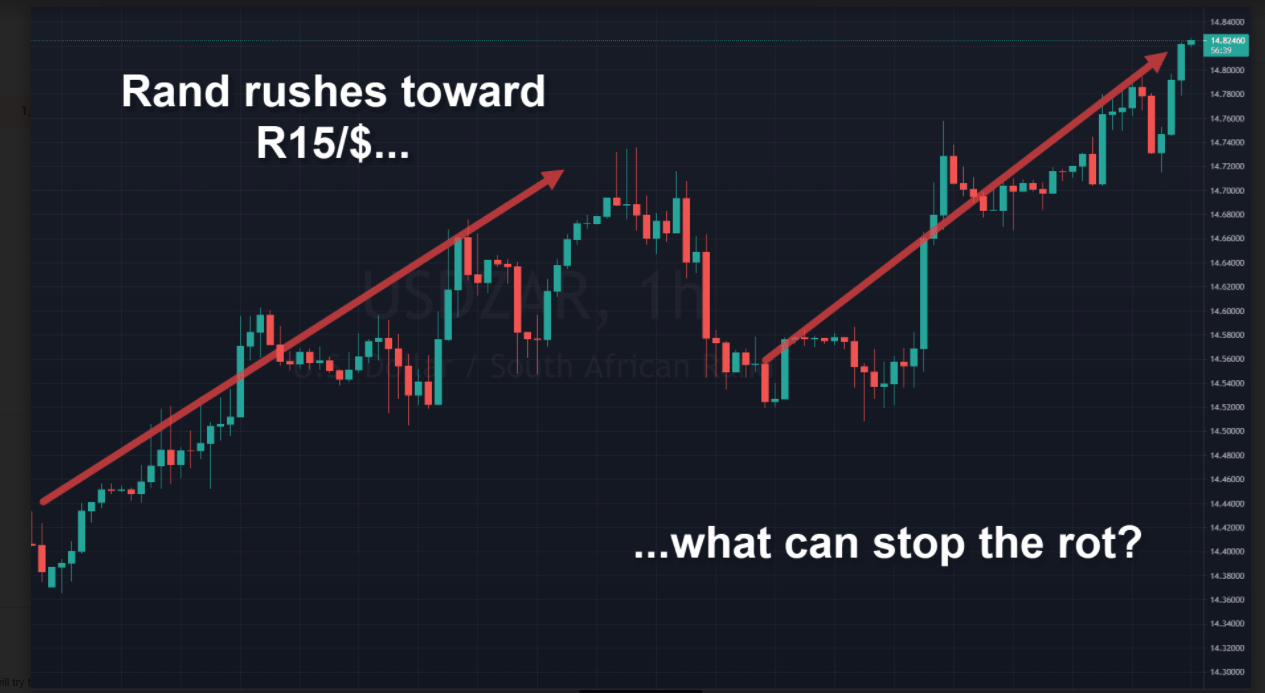 By Thursday, it was testing upward of R14.70 to the Dollar.

The week had flowed just per our Elliott Wave based forecasting system, as the market had bottomed in the target area before moving higher to break that R14.61 level and above.

What a turn it has been since early June!

And then getting back to the Rand, Friday saw more bad news for the local unit.

The USDZAR continued to push higher and higher, eventually testing over R14.80 after SA market hours, as all too suddenly we were nearing the big number of R15 to the Dollar.

Volatility is certainly here to stay - but overall, the weaker Rand trend that we and our forecasts have been waiting for, is well and truly here.

Trust you had something to keep you ahead of this trend before the market turned back in June!

We are heading into an interesting remaining Q3 and Q4 of this year, that is for sure...!

As we head into another week, there are a huge amount of economic events to watch, as we have the end of month rush.

The focus will be especially in the USA, as major Fed events are incoming.

Here are the big ones:

Lots to focus on with the above - apart from all the tensions globally, whether politically, economically or socially around the globe.

The Rand has potential to test higher, and once again, we will continue to filter out the noise and simply follow what the charts themselves are telling us as to how far, based on our Elliott Wave based forecasting system.