The quest for the next explosive cryptocurrency has become a dream for treasure hunters. Nothing ignites a market’s speculative fervor like the chance to turn a single dollar into an over one-million-dollar fortune in a little more than a decade.

Not since the US gold rush in the 1800s have so many fortunes appeared from thin air. Those with the foresight to realize Bitcoin would burst on the scene and change the status quo notions of currencies made fortunes. A $1 investment in Bitcoin in 2010 at five cents was worth $1.14 million at the end of last week, with the leading cryptocurrency trading at the $57,000 per token level. It's worth even more this week even after the token is off its record high price above $66,000, hit on Wednesday.

Cryptocurrencies are the offspring of technological advances, as is the power of social media. The public relations effort in cryptos has only enhanced interest in the asset class. Elon Musk, founder and CEO of Tesla (NASDAQ: TSLA ) is a brilliant engineer. The EV company he built has provided wealth for early investors as it became the world’s most valuable automobile manufacturer.

Musk is also the founder of SpaceX and The Boring Company and the world’s wealthiest person currently, with an over $200 billion net worth. As well, he's a big supporter of cryptocurrencies. When asked how regulators should approach the cryptocurrency asset class in a recent interview, he said they should leave it alone. Kara Swisher, a New York Times columnist, asked Elon whether the US government should be involved in regulating the crypto space. Musks' answer: “I would say, do nothing.”

Elon Musk supports the growth of the cryptocurrency asset class. He and his companies hold sizeable long positions in a host of crypto tokens. When he tweets about one token or another, the prices rise and fall based on the tone of his message. Aside from his business interests, Elon Musk is one of the most influential forces in the asset class.

Musk has his fingers in many tech-based pies

Elon Musk is now the world’s wealthiest individual. He recently overtook Jeff Bezos for that honor. His current net worth of well over $200 billion means he has more money than Bill Gates and Warren Buffett combined.

Musk is also an engineer. Aside from founding SpaceX and The Boring Company, he was an early-stage investor, CEO, and product architect for Tesla. He is also a co-founder of Neuralink and Open AI.

He was also instrumental in creating the company that became PayPal (NASDAQ: PYPL ). PYPL’s $1.5 billion sale to eBay (NASDAQ: EBAY ) in 2002 provided the seed money for the launch of SpaceX that same year.

Clearly, Musk is a busy man. His experience with PayPal and technology in general have given him deep knowledge as well as a pedigree in the payments business. A good bridge as it were to cryptocurrencies which are a revolutionary financial technology and means of exchange that reflect the evolution of finance.

He pumps, but he doesn’t dump

In my view, Musk is a genius and a modern-day DaVinci, a true Renaissance man. But his style is irreverent.

He has taken on short-sellers and nonbelievers in Tesla shares, raising the hackles of the US's Securities and Exchange Commission. He threatened to take Tesla private at $420 per share in 2018 when the stock was trading around the $372 level. The same year, he appeared on Joe Rogan’s podcast in a two-hour convesation and video where the pair drank whiskey and smoked marijuana.

Last summer, at the B-word conference, a major cryptocurrency event, Mr. Musk prodded regulators again, expressing his support for digital currencies when he said, “I might pump, but I don’t dump” cryptocurrencies.

While the world focuses on Bitcoin and Ethereum , the crypto pack leaders, Musk has taken a particular interest in Dogecoin (DOGE). Along with billionaire Mark Cuban, Musk agrees that Dogecoin is a powerful medium of exchange.

Each of his Dogecoin tweets seemed to push the price higher. As of Oct. 18, DOGE remains a leader in the asset class. It's now the ninth leading cryptocurrency, trading at around the 25.5 cents level, with a market cap of around $33.5 billion.

Dogecoin was the child of software engineers Billy Markus and Jackson Palmer, who decided to create a payment system as a “joke.” But with a $33.5 billion valuation and high-profile support the digital currency no longer something to laugh at.

DOGE is a satirical homage to Bitcoin with a brand. The internet meme centered around the image of a Shiba Inu dog with bad spelling habits, explains “doge” instead of “dog.” In June 2021, Musk tweeted the following:

Obviously, he loves that canine!

A new cryptocurrency, Shibavax (SHIBX) is a knock-off of that original joke that's soared since it came to market on Oct. 10. ShibX mainly took blight because of the popularity of Doge.

Shibavax’s website outlines the new entry into the cryptocurrency market. ShibX is a reflection token, meaning it takes a 10% reflection fee on each transfer and distributes it to all ShibX holders. Essentially, the token rewards passive investors with dividends. 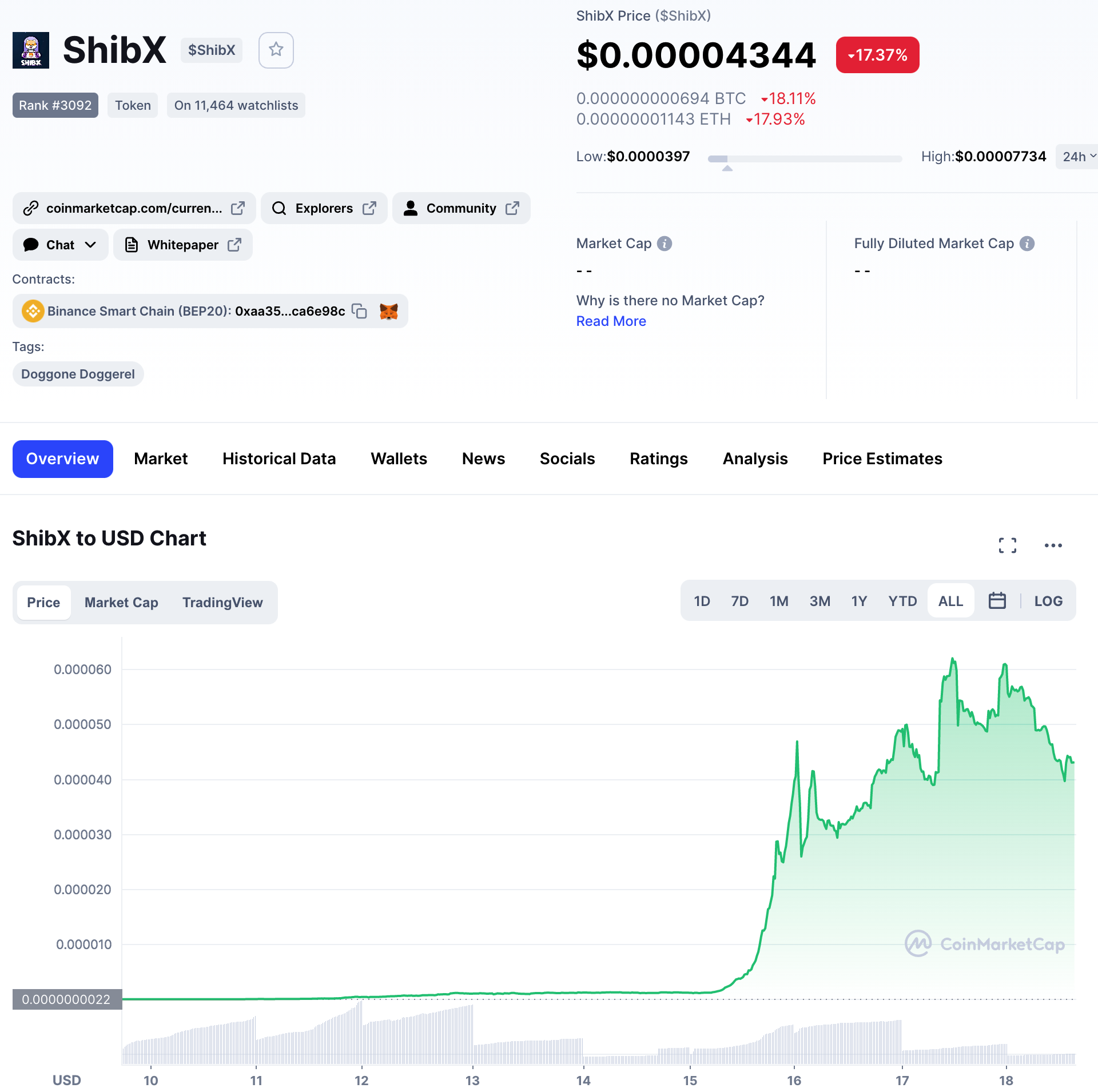 Oscar Wilde once said, “The only thing worse than being talked about is not being talked about.” Elon Musk, Mark Cuban, Jack Dorsey, and other high-profile billionaires have provided invaluable press for Dogecoin making sure it remains 'talked about.' The token's symbol, a Shiba Inu, a breed of hunting dog from Japan, is a brand that turned a crypto joke into a trendy investment.

To paraphrase the old saying, imitation is the highest form of flattery. ShibX is one of the tokens that is running in the pack behind the Dogecoin.

The dog has another two tokens pulling the sled to the upside. Shiba Inu (SHIB) was the 19th leading crypto on Oct. 18, with an over $11.18 billion market cap. Bone ShibaSwap (BONE) was number 1004, and Shiba Puppy (ShibaPuppy) was number 3321 in the hierarchy. Moreover, there are over fifty other Shiba tokens, including my favorite name, Baby Shiba (BHIBA).

Elon Musk deserves lots of credit for his work in EVs, payments, space travel, and networks of tunnels that will improve future traffic flows. The pack of Shiba tokens owes Elon lots of thanks as Mr. Musk has turned out to be the Shiba family’s best friend.