When South African Finance Minister Tito Mboweni unveiled the government’s 2021 Budget on 24 February this year, it is fair to say that the commentary following it was far more upbeat than has become customary over the last number of years. There were good reasons for this – compared to the dire expectations presented in the Medium-Term Budget Policy Statement (MTBPS) in October 2020 (a mere four months prior), the Budget presented a materially improved outlook. Higher-than-forecast revenues, buoyed by increased VAT, customs duties and corporate taxes (particularly from the mining sector which has benefitted from elevated commodity prices), together with better-than-expected collections across a range of other sectors, helped reduce the projected budget deficit in 2020/21, as well as in the medium term. This in turn reduced the government’s borrowing requirement over the coming three years and lowered the country’s projected peak Debt/GDP ratio from around 95% to 89% in 2025/26. 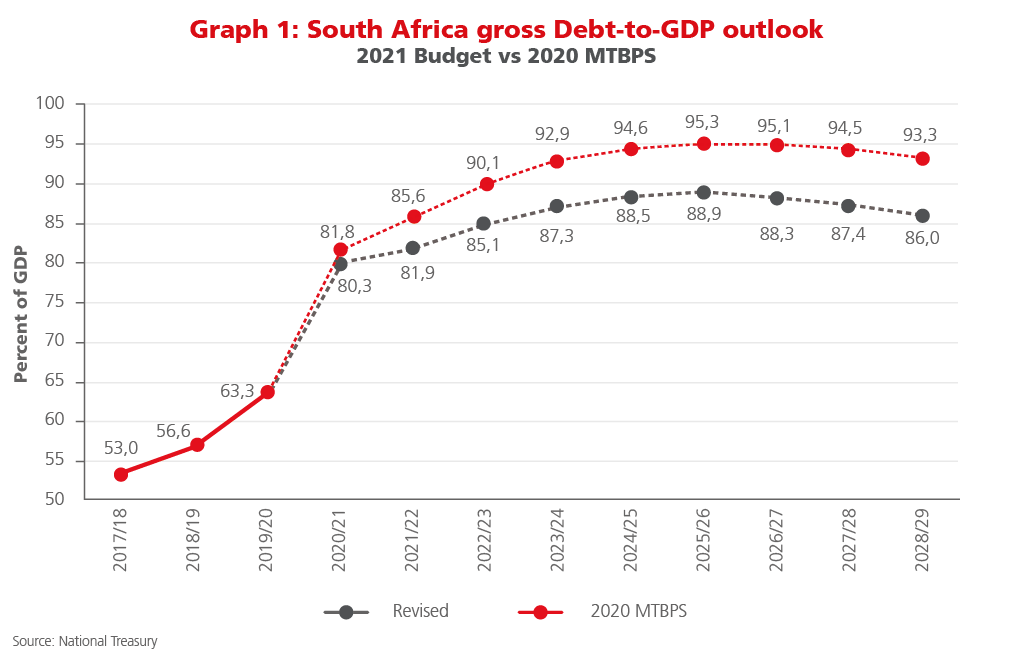 A contrarian move in Q1 2021
What were the immediate implications for the SA bond market? Taken in isolation one might have thought the February Budget would have been positive for bond yields given the improved fiscal position and reduced supply versus what had been projected in October. Combined with National Treasury having already pre-funded a fair amount of its needs, the market saw reductions in the supply of nominal and inflation linked bonds (ILBs) on auction at Treasury’s weekly auctions. Instead, the SA bond market has experienced a material sell-off in yields since the February budget! Yields have moved higher, with the FTSE/JSE All Bond Index ({{ALBI) returning -1.7% over the first quarter of 2021. What could be the explanation for this seemingly contrarian behaviour?

One explanation could be to focus on the global dynamics which have come to dominate headlines since the budget announcement – the spectre of higher inflation in the US has now become the focus of the day. This involves the notion that accelerating growth will be accompanied by significantly higher inflation given the massive fiscal stimulus provided by governments (such as the US’s most recently proposed US$2.25 trillion infrastructure spending programme) and concerns as to possible monetary policy tightening or even the potential lack thereof. This concern, in turn, has manifested in a significant sell-off in US Treasury yields which has rippled across global bond markets and pushed emerging market (EM) yields higher. The South African bond market sell-off in this narrative is all about the global dynamics.

Another explanation could be the weakness in bond yields in Brazil and Turkey in recent months reverberating across all emerging markets and causing EM bond markets to sell-off, re-pricing the entire sector wider. Brazil’s economy has been hit by the uncontrolled spread of the Coronavirus, and the Turkish President has brought on a crisis in investor confidence by firing his latest central bank governor and top Cabinet members.

Or perhaps the explanation is something else entirely.

Compelling returns on offer
So where does this leave the outlook for local government bonds? Notwithstanding the significant and much-improved outlook in the February Budget, it is worth reflecting on the fact that South Africa still finds itself in a precarious financial position. Against a developed country backdrop, a Debt/GDP ratio of around 90% would not appear problematic (at least not at the moment), since the US and many other countries have higher metrics. The key difference is the high cost of interest South Africa has to pay on the debt it raises versus the near-zero rates at which developed countries can borrow. The real cost of debt (the nominal interest cost less inflation) in South Africa is significantly above its real growth rate – something that is unsustainable in the long term. One simply has to look at the size and growth of South Africa’s interest bill to get a sense of the challenge. With a large part of National Treasury’s budget projections being reliant on successfully negotiating a public sector wage bill that will shrink in real terms, investors and South Africans should be under no illusions as to the fiscal challenge.

As our clients will know, we focus on asset valuations and not forecasts (or “stories”) when making our investment decisions. In this regard, we remain constructive on SA government bonds. The past quarter’s weakness has made valuations even more attractive. We believe they currently offer investors a compelling prospective real return. With 10-year bonds yields around 9.5% and with a long-term inflation assumption of around 5%, investors are being offered a very attractive real return of around 4.5% (and more for longer-dated bonds). This compares very favorably with our internal long-term equilibrium real return estimate of around 2.5% – making bonds a compelling investment prospect. This view is reflected in our overweight bond positioning across our multi-asset funds. In fact, during the recent market weakness we added to our overweight bond positions in the Prudential Balanced and Inflation Plus Funds, among other multi-asset portfolios.

As with all investments, this return does not come without risk. We have highlighted some of the risks above – the country’s fiscal trajectory, global dynamics and inflation to name but a few. Additionally, investors should not expect these prospective returns to be delivered in a straight line – bond returns, as we have seen over the last year, can be extremely volatile! But for those investors prepared to look through the short-term noise and volatility, we do think there are compelling returns to be made.