The Rand entered the new week in a position of vulnerability after recent losses undermined a pair of important resistance levels for the USD/ZAR exchange rate, giving rise to a risk of further losses for the South African currency that would also imply upside potential for GBP/ZAR .

South Africa’s Rand rose more than 10% against a cratering Turkish Lira while edging higher against the Polish Zloty last week but was otherwise left to carry noteworthy losses against developed and emerging market counterparts alike into the new week.

Most notably the USD/ZAR rate has rallied through much of November and last week climbed above its 100-week moving-average at 15.6004 and the 38.2% Fibonacci retracement of its 2020 decline located at 15.6759 in price action that leaves the Rand with little by way of support on the charts.

“The rand seems set to continue to trade at weaker levels since last week’s MPC announcement. The rand is likely to trade in a range of 15.50-15.80 to the greenback in the absence of any significant news,” says Siobhan Redford, a macro economist at Rand Merchant Bank.

“High inflation and hawkish sentiment from Federal Reserve speakers has markets also trying to divine if the 6.2% October inflation print will push the FOMC to increase the pace of asset purchase tapering at its December meeting to enable earlier rate hikes,” Redford wrote in a Monday research note.

Dollar gains and Rand losses lifted the USD/ZAR rate to 2021 highs last week and have had an uplifting impact on the Pound-to-Rand rate also, although Sterling remained a way away from its own equivalent peak on Monday. 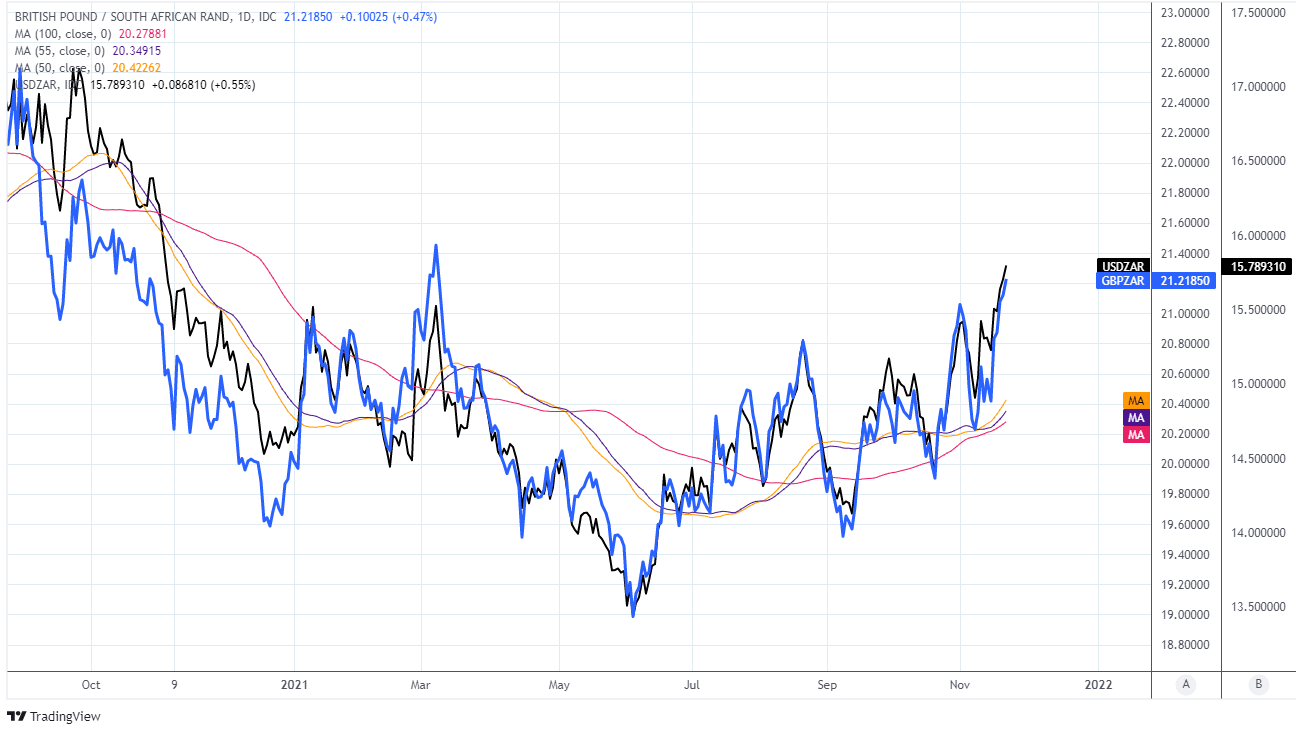 Redford and the Rand Merchant Bank team are looking for a USD/ZAR range of 15.50-15.80 this week which, when combined with the level of the main Sterling exchange rate GBP/USD on Monday, loosely suggests an indicative GBP/ZAR range spanning the gap between 20.8320 and 21.2352.

There have been multiple factors driving the Rand and wider market including last week’s South African Reserve Bank (SARB) monetary policy decision, investors’ responses to commentary and statements from Federal Reserve officials as well as coronavirus-related developments in Europe where some countries are attempting to reimpose restrictions on activity and social contact.

“Despite the fact that the South African central bank (SARB) delivered as expected and hiked its key rate by 25bp to now 3.75% the rand suffered significant losses. From our point of view this was also due to bad timing – the collateral damage of the lira collapse, which also affected other EM currencies, dominated and put notable depreciation pressure on the rand,” says Elisabeth Andreae, an analyst at Commerzbank (DE: CBKG ).

Last Thursday’s Thursday’s SARB decision to lift its benchmark interest rate from 3.5% to 3.75% was overshadowed by a further collapse of the Turkish Lira, which reached new all-time lows after the Central Bank of the Republic of Turkey cut its interest rate a third time in as many months, and some analysts believe this may account for some of the Rand’s heavier losses.

Others have floated the possibility of a market protest over the SARB’s guidance about the outlook for interest rates in South Africa where the central bank assesses that domestic inflation pressures are still mild and enough so to merit only a gradual cycle of interest rate rises over the coming years.

While the Rand’s correlation with the Lira and domestic policy matters may have impacted the currency, broad strength of the Dollar has also been an important factor.

Three Federal Reserve policymakers suggested last week that U.S. inflation pressures could ultimately merit a faster end to the Fed’s quantitative easing programme than has so far been planned, as well as interest rate rises that come sooner than so far suggested.

“To me, the inflation data are starting to look a lot more like a big snowfall that will stay on the ground for a while, and that development is affecting my expectations of the level of monetary accommodation that is needed going forward,” Federal Reserve Board Governor Christopher Waller told the New York based Center for Financial Stability in an address last week.

“The timing of any policy action is a decision for the FOMC, but for my part the rapid improvement in the labor market and the deteriorating inflation data have pushed me towards favoring a faster pace of tapering and a more rapid removal of accommodation in 2022,” Waller said among his concluding remarks. 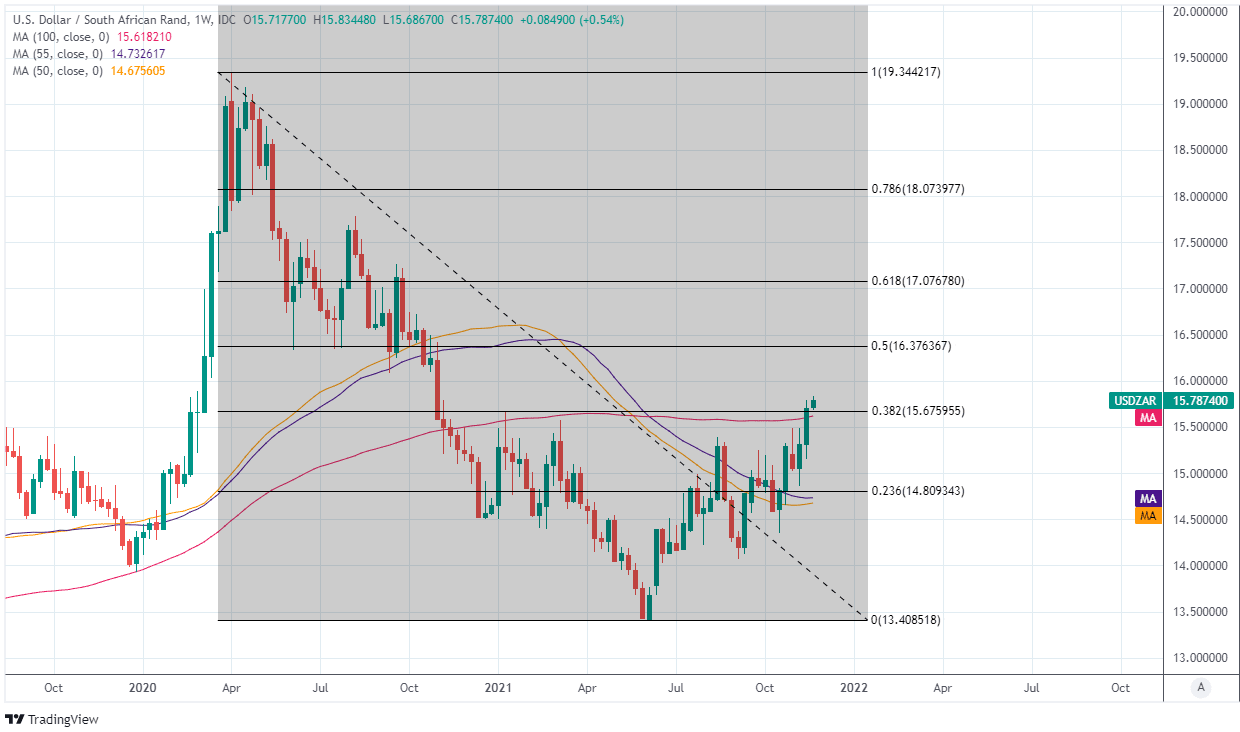 The South African economic calendar offers little by way of major data for the week ahead although what is lacking there is made up for on the U.S. side where the latest reading of the Fed’s preferred inflation measure will be announced on Wednesday and just hours before minutes of November’s monetary policy meeting are published.

“Investors will focus on this week’s PCE index, FOMC minutes and any news regarding a change of leadership of the Federal Reserve. If Brainard is appointed as Fed chair, the market will expect low rates for longer,” says Steen Jakobsen, chief investment officer at Saxo Bank.

The danger is that the PCE index reading reveals yet a further rise in U.S. inflation that could lead to renewed upward pressure on American bond yields and particularly those with shorter-term maturities, which would potentially have bearish implications for the Rand as the USD/ZAR exchange rate tends to follow shorter-term U.S. bond yields more consistently.

However, the White House is also due to announce its nomination for the leadership of the Federal Reserve from February 2020 and there’s a chance the nomination could favour an alternative candidate to the incumbent Chairman Jerome Powell, which would likely have an adverse impact on the Dollar.

“The nomination news could generate significant short-term volatility on the choice of the nominally more dovish Lael Brainard over current Fed Chair Powell, though we see little difference in the medium-longer term implications for monetary policy,” Jakobsen told clients on Monday.