Investor confidence in the Rand has been permanently shaken by the July riots, while expectations for interest rate rises at the U.S. Federal Reserve will act as a global headwind to the currency.

These are the findings of Elisabeth Andreae, FX and EM Analyst at Commerzbank (DE: CBKG ), who has told clients she is lowering her forecasts for the South African Rand against the Dollar and Euro .

This therefore also implies weaker-than-anticipated purchasing power against the Pound.

"The prospect of interest rate hikes by the South African central bank is supportive. However, due to the fragile economy, we see the rand weakening in the medium term. We have adjusted our forecasts," says Andreae.

Expectations for the Rand to trade at lower-than-expected levels come as the Rand trades a broad sideways pattern against its peers. 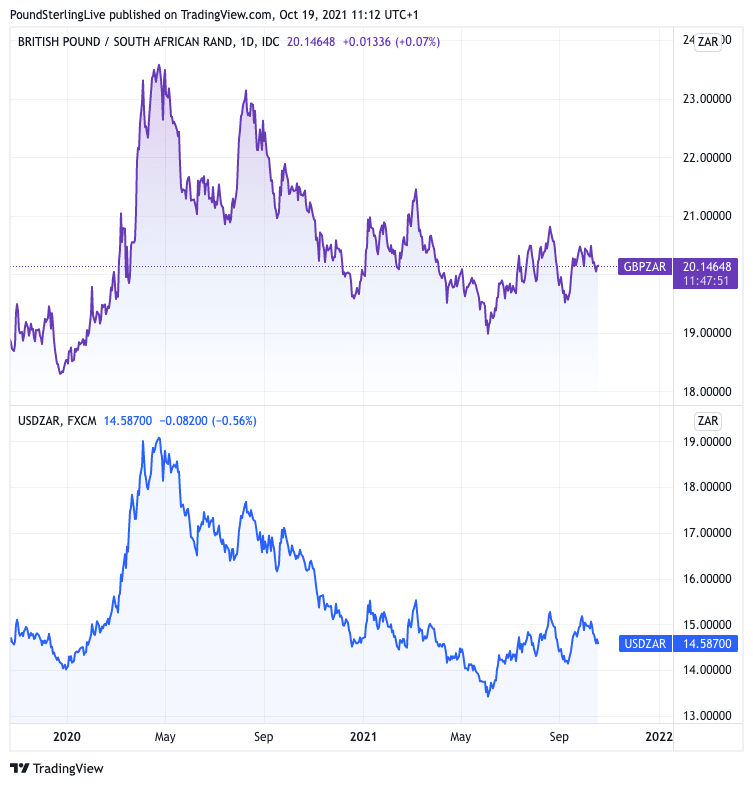 FX transfers: Secure a retail exchange rate that is between 3-5% stronger than offered by leading banks, learn more. (Advertisement).

Longer-term the Rand has recovered from the all-time lows experienced in early 2020 but the trend of appreciation ultimately ended mid-year.

"The rand was able to recover the pandemic-related losses against the USD and EUR by the end of 2020 and mid-2021, respectively. The main drivers were hopes for a strong recovery in the wake of booming commodity markets," says Andreae.

That commodity boom continues and should provide some insurance against significant weakness.

But further international Covid waves and expectations for the Federal Reserve to withdraw monetary support are expected to weigh on the Rand over coming weeks and months.

"The global environment shaped by the pandemic and its aftermath is likely to remain challenging for the time being," says Andreae.

The Fed is likely to begin shrinking its asset purchase programme by year-end and could raise interest rates as soon as mid-2022.

This would suck up excess liquidity in international markets which can act as a headwind to Emerging Market growth.

Commerzbank's forecasts for the Rand in August were more generous:

Back then analysts said the recovery in commodity prices would likely support the South African currency, together with the prospect of a strengthened government team following President Cyril Ramaphosa's cabinet shakeup.

Andreae is also now of a view that the impact of the July riots is casting a long shadow over sentiment.

"The violent riots in July also contributed to this, which are likely to have permanently shaken ZAR investors' confidence," she says. "The domestic economy remains fragile and vulnerable to global risks."

Despite a more dynamic recovery in the first half of the year South Africa's total economic output remains below pre-crisis levels.

"Key factors are too hesitant structural reforms, too little investment, the immensely high unemployment rate and the recurring bottlenecks in energy supply, which are in danger of becoming even worse," says Andreae.

But the prospect of higher inflation should be met with higher rates at the Reserve Bank of South Africa (SARB), which will "remain an important support for the rand with its stability-oriented course."

The SARB could raise rates as early as November, according to Commerzbank.

They have adjusted their interest rate forecast and now expect a key rate of 4.25% by the end of 2022.