While the jury is still out on whether the worst is behind us or not, I will present you with a series of factors that may help evaluate what we have ahead. Spoiler: the number of bullish indicators appears to be growing.

Let's see what you think.

1. Friday's U.S. employment data was good, but of course, at the same time, it is a double-edged sword because it allows the Federal Reserve, if it sees fit, to maintain a tighter monetary policy for longer.

Given the Fed's latest statements, the intensity of the rate hikes will likely remain the same. Still, with a more resilient economy, we may see a pause rather than a pivot, meaning the high-rate environment would be kept in place for longer.

2. This latest resurgence of investor sentiment for equities is reminiscent in some ways of the one experienced at the beginning of August when fund and hedge-fund managers increased their purchases and exposure to the stock market. That did not end well, as the S&P 500 plunged more than -15% in 8 weeks.

3. The S&P 500 has fallen as much as -25.2% from its all-time high this year, slightly less than the average -28% drop the index has recorded in recessions since World War II.

4. When the S&P 500 falls during a year in which there is a U.S. mid-term election (as is the case in 2022), the following year has been strong every time. Such a scenario has occurred eight times since 1950, and the benchmark index has risen all eight times in the following year, with an average annual return of +24.6%.

5. In 2024, there will be presidential elections in the United States, so 2023 will be a pre-election year. Pre-election years are historically very strong for stocks, with the S&P 500 rising an average of +16.8%.

6. Also, watch the markets the week before and after Christmas. Since the end of World War II, the average return for the S&P 500 in the week before Christmas is +0.5%. Returns greater than +1% have occurred on 23 occasions (30% of the time). There were 14 occasions when the S&P 500 was up more than +2%, with the last instance being in 2014. The first half of December is generally not very strong; however, that tends to change as we approach year-end.

7. Earlier this week, the S&P 500 managed to close a session slightly above its 200-day moving average, something that had not happened in 7 months. In the 13 previous occasions in which the index stayed below this 200-day moving average for at least six months and then closed higher, it only fell to new lows once, and the average rise in the following year was +18.8%.

8. The greater strength of the European stock markets in general compared to Wall Street lies fundamentally in 2 reasons:

9. In Europe, two stock exchanges stand out for their strength compared to the others. They are the British ( FTSE 100 ) and Portuguese ( PSI 20 ). The former is up +2.32% in 2022, and the latter +6.4%. The reason is that they have a higher exposure to the commodities sector, which has had strong rises this year due to the war in Russia and Ukraine.

Bullish sentiment (expectations that stock prices will rise over the next six months) fell 4.4 percentage points to 24.5% and remains below its historical average of 37.5%.

Bearish sentiment (expectations that stock prices will fall in the next six months) increased 0.2 percentage points to 40.4% and remained above its historical average of 31%. 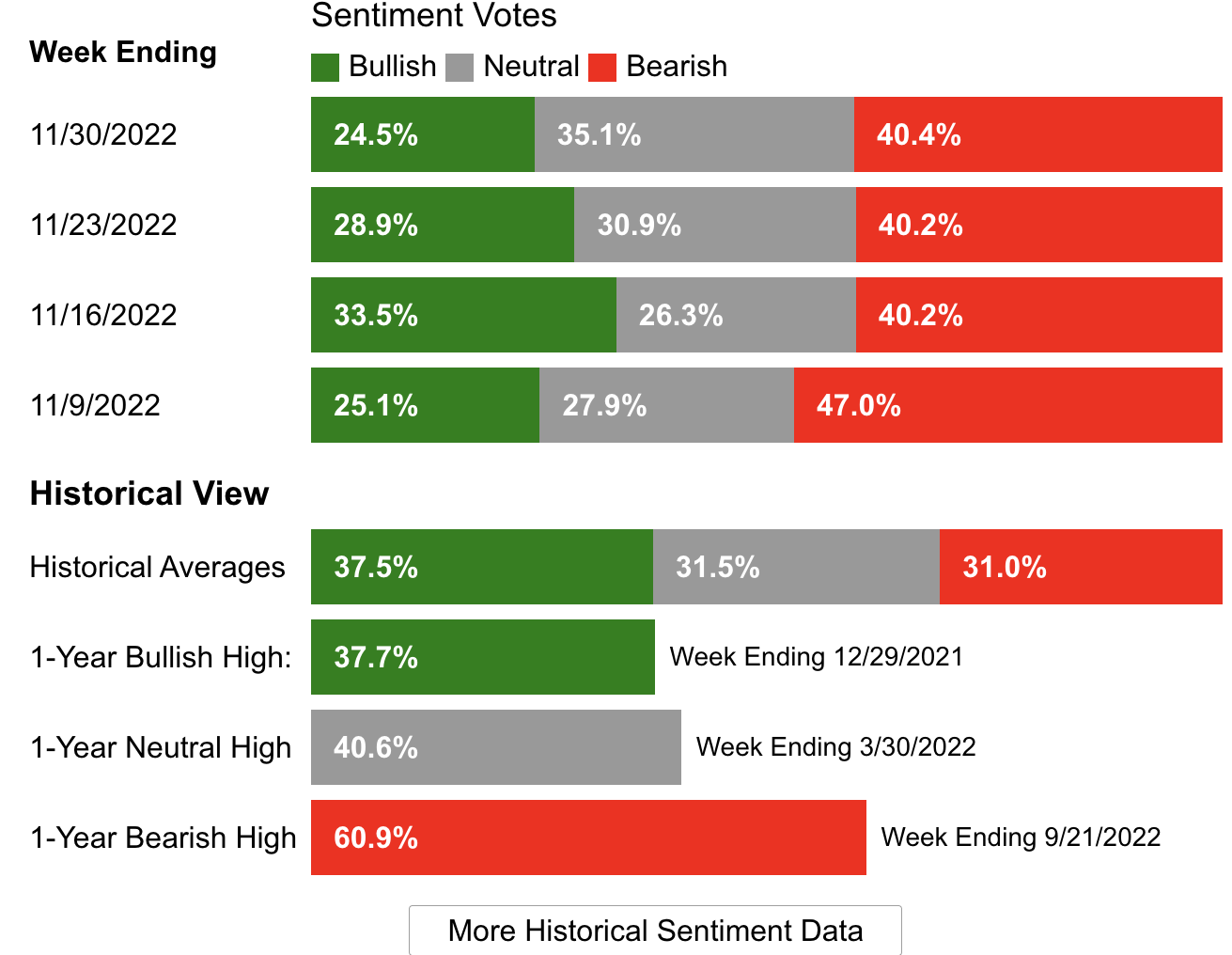 Gold has been thriving on the back of a risk-on environment. The Fed's less aggressive stance, the fall in the dollar , and the fall in interest rates on debt have accelerated gold's rise to reach the $1,800 level, a record high since last July.

In sum, the yellow metal could see further upside in 2023 with the Fed, the dollar, and debt interest rates as allies. Even the threat of economic recession could reinforce its attractiveness as a safe-haven asset. The combination of these factors could result in the conquest of the psychological barrier of $2,000 per ounce.

At the moment, it has just reached resistance, and neither Thursday nor Friday was it able to break through it.

The year-to-date ranking of the main stock markets is as follows: