If inflation is cooling, you would never know from those retail sales numbers that came out yesterday. I’m not going to get into all the data, but the numbers were better than expected. One item that I found interesting was the Food and Drink numbers; like going out to dinner, it was up 14.1% y/y. Interestingly, it steadily decreased, but it recently turned higher again. That’s inflation. I have seen it first hand, in my own experience.

It is also worth mentioning that the Atlanta Fed sees 4Q growth at 4.4%, so if there is a recession, I’m not seeing it yet.

Why do I bring this up? Well, the FOMC minutes are coming on Wednesday, the day before Thanksgiving. Five governors will be talking today, on top of 3 or 4 yesterday. So all of them, from my standpoint, made it pretty clear that slower does not mean fewer, and I hear that 5 to 5.25% target rate more often than not.

Meanwhile, the S&P 500 closed lower by about 80 bps at 3958. If that 3950 level breaks, it is not going to be good. That is a considerable level that, if broken, probably leads to that gap at 3,750 getting filled. Again, it looks very much like a diamond reversal top and not all that different from those we saw in August and early October. 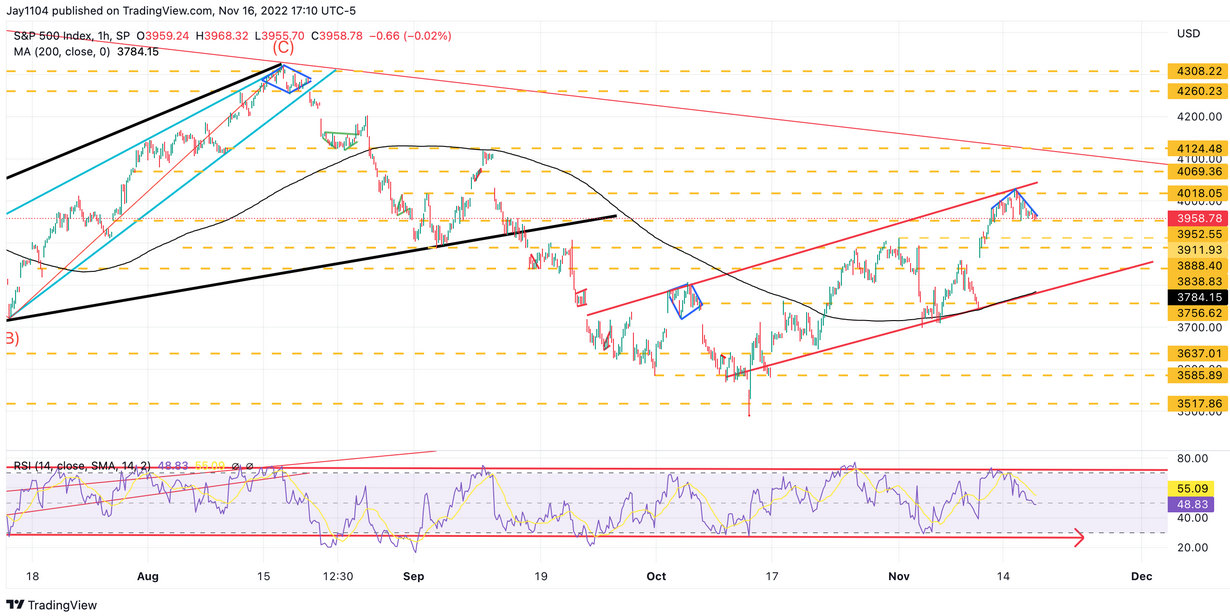 NVIDIA (NASDAQ: NVDA ) results were mixed at best, with revenue coming better than expected, while earnings were $0.58 per share, missing estimates of $0.70 per share. Adjusted gross margins came in at 56.1% versus forecasts of 64.9%. The outlook wasn’t much better, with revenue guided to $6.0 versus estimates of $6.09 billion. The stock was up slightly after hours, despite running up about 50% from the October lows. My guess here is if the stock does go up, that is an IV melting-type situation then because the results were far from stellar. Implied volatility for the November 18 expiration date was at 140% yesterday.