The Case For Concern

In less than 6 weeks, the S&P 500 has dropped nearly 15%, and just pulled off the lows we saw in mid-June. A feeling of panic has crept into financial markets around the world, and it’s getting harder to ignore the reasons for that panic.

I still believe the U.S. economy and market is in a relatively stable position. Spending remains high, jobs growth is likely to slow but was still strong in August, and there is less of a world ending feeling than there was in 2008 or in 2020.

That’s also a straw man. I started investing in 2011. From then through 2021, the market rallied from every dip. The market has meanwhile felt expensive since 2015. And the 2008 crisis remains unique in size and scope. Those all can teach one the wrong lessons.

It is possible for the current environment to be much less bad than 2008, less uncertain than the March 2020 bottom; and still be pretty bad and plenty uncertain.

The three things that make this period especially uncertain to me, and justify market skepticism are:

The Case For Buying

For all that, I’ve been buying stocks. Not a lot, and I still have 30% of my portfolio in cash, about my usual level as stock values also drop. But for the right time frame and in the right stocks, I have felt it’s worth adding to positions.

How’s that square with the uncertainty? Uncertainty makes stocks cheaper. For good reason: added risk of systemic breakdown, and added risk of over-leveraged companies not making it in a recessionary or higher interest-rate environment. Many business models that have not been tested in such a tough climate will go bust.

Those are the risks. My buying is a bet that any systemic breakdown won’t be huge, and that I can avoid the business models that go bust from leverage or poor economics, while finding good businesses that have gotten more affordable. The risk of inaction is rising to the level of those other risks, in my view.

Here are four names I’ve added in my portfolio or portfolios I manage for family and friends in the past couple of weeks.

Juniper Networks (NYSE: JNPR ) was an original dot com boom and bust stock, and has really done not much for investors since. My friend and podcast co-host Akram’s Razor turned me onto the stock, and the thesis at this point is that it is at a point in the cycle where sales are going higher, not pulling back – the company has guided for 10% sales growth this year and mid-single digits growth in 2023. Demand has been too high for the company to service it, so a slowdown is almost welcome. The company’s debt is all fixed, mostly below 4%. They invested in working capital last quarter to help meet demand, so free cash flow is lower than normal, but they trade at about 18x enterprise value to EBDA – Capex, before this demand surge plays out. 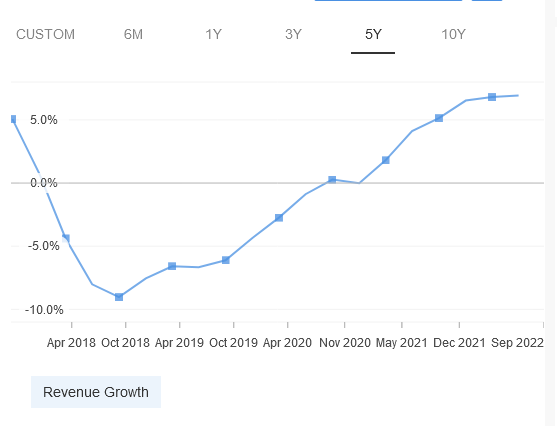 You also get a 3.2% dividend. Between the operational momentum, the solid balance sheet, and a reasonable valuation, it seems Juniper is well set up.

I wrote about Spotify Technology (NYSE: SPOT ) a couple weeks ago. My position is new and very small. I am worried that Spotify is running a 2010s playbook in a 2020s market, but I also think that even in an economic downturn, they won’t lose many subscribers, and their long-term position is strong and getting stronger. At 1.5x EV / Sales and 5.9x EV / gross profits, the valuation seems accommodating enough to wait and see.

I mentioned Atkore (NYSE: ATKR ) at the previous market bottom. It is an example of an over-earning cyclical exposed to construction in general and home construction to some degree, both of which are bound to slow down. They also have been able to raise prices in the face of cost inflation. 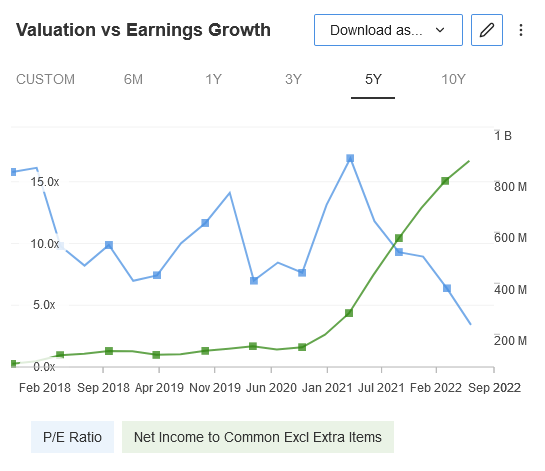 There are two big questions here: first, whether the market is right in pricing for that to go away at a faster and steeper rate than the company does – Atkore sees one more boom year and normalized EBITDA around $575M, good for a 6.25x EV/EBITDA multiple. And second, if the company can maintain its strong balance sheet while still buying back lots of shares and buying smaller companies to add to the business. If the share count is low enough and the net debt load hasn’t grown, and if the new businesses strengthen Atkore’s position, then ATKR shareholders should be fine to ride through the down cycle at these valuations. That is what I’m betting on.

AerCap Holdings (NYSE: AER ) is the biggest lessor of planes in the world. The reasons to like Aercap are that the company came through the pandemic fine, it historically buys back shares, it trades at 64% of book value, travel demand remains high with Japan reopening as a nice boost, and airlines trimmed their balance sheet by offloading planes, making lessor services more in demand.

The reasons to not like Aercap are that the company is not likely to buy back shares for some time after its acquisition of GECAS, GE’s aircraft leasing business, and the company’s book value took a big hit with the Russia-Ukraine war and the sanctions imposed on Russia, basically forcing Aercap to give up 5% of its book value.

I’ve held Aercap throughout this period, but soured after the Russia news. I think it’s clear that Aercap may never trade at book value, and maybe never should. At the same time, Russia issue aside, Aercap’s business position has strengthened, and I think at this price the rewards outweigh the risks. I bought some shares at $40, having sold some in the low-mid $50s earlier this quarter and year, and think it can get back to its post GE deal highs in the mid $60s.

Being Careful Out There

Buying stocks now doesn’t mean that the market couldn’t go down another 10 or 20% in the coming months. It doesn’t necessarily mean the market is cheap, or that all the bad news is priced in.

It’s just that we’ve already seen some of the biggest risks – persistent and maybe lasting inflation, rising rate hikes, energy scarcity, and fiscal pressure. Markets tend to adapt to these sorts of risks. They will, I think, pass.

And while buying feels uncomfortable now, and I’m only able to do it a little at a time, uncomfortable actions, if backed by good research and patience, often pay off. More so than in a market like the last couple of years.

Those are the names on my recent buy list: what’s on yours?

Disclosure: I am long ATKR, AER, SPOT, and JNPR.